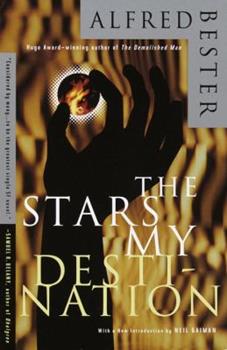 The Stars My Destination

Marooned in space after an attack on his ship, Nomad, Gulliver Foyle lives to obsessively pursue the crew of a rescue vessel that intended to leave him to die.

One of the greatest SF novels ever written.

Published by Thriftbooks.com User , 19 years ago
Capsule Description: Proto-Cyberpunkish dark future with some unique twists, a flawed and driven protagonist, and gripping action. On my Top Ten list. Read it. Buy it. Buy two and give one to a friend. Review: Alfred Bester is generally recognized as one of the greatest writers of SF, especially on the strength of his plots and prose style. He made his reputation on short stories, but is best remembered for two novels: The Demolished Man and The Stars My Destination (sometimes known as "Tiger! Tiger!" in the UK). First published in 1956, The Stars My Destination anticipated many of the staples of the later cyberpunk movement -- the megacorporations as powerful as the governments, body and mind redesign to specs, the dark overall nature of the world, even the cybernetic enhancement of the body. To this it added the standard "one wierd idea" of SF -- that human beings could learn to teleport, or "jaunte" from point to point, with various personal limitations but one overall absolute limit: no one could bridge the gap between a planet and anywhere in outer space. On the surface of a planet, the jaunte ruled supreme; off of it, mankind was still restricted to machinery. In this future world -- extrapolated with convincing and sometimes frightening accuracy by Bester -- we are introduced to the protagonist, Gulliver ("Gully") Foyle: "He was one hundred and seventy days dying and not yet dead..." Foyle is a former nobody, a man who had lots of potential but never had to use it, completely lazy, doing the minimum he could to get by, who is suddenly marooned in space with no escape. Even this isn't enough to motivate him beyond trying to find air and food on the wreck; he hasn't learned enough to know it's possible to FIND a way out of his situation. But he is galvanized to action when an apparent rescue ship deliberately passes him by.In a sense, The Stars My Destination is simply a SF rewrite of a far older classic, The Count of Monte Cristo. It's the study of a capable, vengeance-driven man who escapes from an apparently impossible situation (twice, in Foyle's case) and returns as an utterly different man to wreak the vengeance that he was denied under his old name. Unlike many other Monte Cristo homages, however, Bester's is written with language fully as evocative as the original's, and with added intricate plot threads that make Gully Foyle's odyssey unique.I cannot find sufficiently enthusiastic ways to recommend this book. It is one of the best, shining examples of what science fiction can be, in many ways. Read it.

Published by Thriftbooks.com User , 19 years ago
....try re-reading "The Stars My Destination." You might find that this is indeed the same novel under it's original (and better fitting) title. Apropos of the original title, I believe that any connoisseur should attempt to get their hands on the novel as it was meant to be conveyed. So, "book snobs" unite, and pick up "Tiger! Tiger!" Both Gully Foyle and Edmond Dantes will commend you.

Published by Thriftbooks.com User , 20 years ago
The prologue of this book paints a whole world and time, into which is placed a truly unlikely, but unforgettable, main character, Gully Foyle. Who is introduced with: "He was one hundred and seventy days dying and not yet dead." Possibly the best opening line in all of SF. I still remember it 10 years after my last reading. Only the opening line in "Ringworld" comes close. Literally the textbook example of the "narrative hook."The story, as such, is "The Count of Monte Cristo in the 25th Century" -- and Bester never claimed otherwise. But it's the fabric of the world he creates to set it in, the sheer mastery of prose, and audacity of his ambition, that sets this book apart from most. It's such a grand ride, like a roller coaster that keeps on going every time you thought there wasn't any more it could do.A grand display of a first-rate writer at the peak of his form.Is Demolished Man a better book? I don't think so, but, heck, read them both and decide for yourself.

I am a convert

Published by Thriftbooks.com User , 20 years ago
That this book is over 45 years old and still an "underground" classic is a travesty. This author perfected the concept of world building before the phrase was coined. Bester visualized a future three hundred years from now that will be demolished and reconstructed by humanity's discovery of a talent for teleportation (jaunting). His insights into how this one factor has affected every level of our society are so fresh and well thought out that my preconceived notions about early sci fi writers being quaint and naiive have been permanently obliterated. If, like me, you also expect the characters and dialog to reflect a '50's cliche, you will be shamed. Our so-called hero is every bit the foul-mouthed, amoral neanderthal from the beginning, when he is pushed to stretch his mental powers in order to survive abandonment in deep space. From there on, he uses everything and everyone in his quest for vengeance, which necessitates his surface transformation into an educated, civilized man -- indeed, only his language really cleans up. The other characters are also revealed one by one to be ruthless and driven, once they have been crossed or betrayed by Gully Foyle. Bester draws a chilling, fascinating portrait of human nature that is sharpened by dystopia.For all these admittedly dark and depressing themes, this novel avoids melancholy or bleakness. The pervading feeling is strangely light and hopeful, the people oddly likeable. At the last fifty pages or so, we find plot twists that cause us to question and reevaluate our assumptions once again. In all, The Stars My Destination was so well conceived that I can only marvel at the distinct lack of copycat authors in ensuing decades. Perhaps Bester is in such a class of his own that the rest of the sci fi genre intuitively shys away from mimicry. Bravo, well done.

One of the best science fiction novels ever written!

Published by Thriftbooks.com User , 23 years ago
_The Stars My Destination_ is one of the best novels I have ever read. It's so good that the first time I read it, I was overwhelmed by the number of amazing ideas and action-packed scenes filled in the book. Gully Foyle is one of the most wonderfully ruthless and tortured protagonists ever to be written. And the novel has no limits to its sense of depth and imagination; jaunting across Earth, Foyle's quest for revenge against Vorga, the number of interesting and unique characters Bester created, as well as his wonderful experiments in elaborate prose manipulation...this book is the very definition of compelling. About the only flaw I can say that the novel has is that some of the references are a bit dated from the 50's. But it's still so fresh and innovative that it makes a lot of today's SF novels seem dated. And it has influenced thousands of other writers, myself included. Along with this book, there's Bester's _The Demolished Man_. Another great book that shouldn't be missed.
Trustpilot
Copyright © 2022 Thriftbooks.com Terms of Use | Privacy Policy | Do Not Sell or Share My Personal Information | Accessibility Statement
ThriftBooks® and the ThriftBooks® logo are registered trademarks of Thrift Books Global, LLC