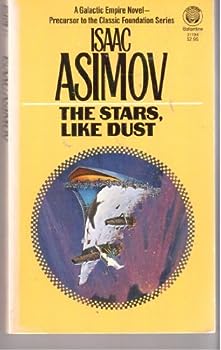 This description may be from another edition of this product. The first book in the Galactic Empire series, the spectacular precursor to the classic Foundation series, by one of history's most influential writers of science fiction, Isaac Asimov His name was...

Asimov is at it again! Excellent!

Published by Thriftbooks.com User , 11 years ago
Asimov is at it again! Within seconds the main character narrowly escapes death and is thrown into a whirlwind of political intrigue among the stars.

Well I liked it.

Published by Thriftbooks.com User , 13 years ago
I know that this is often cited as one of Asimov's worst novels, but I'd have to disagree. The story is probably the closest to space opera that Asimov ever gets, with plenty of intrigue, drama, and betrayal. The story unfolds well, with just the right amount of foreshadowing. It's got the typical Asimovian trappings, with twists galore, nearly omniscent characters, and lots of political bickering. In terms of overall quality, it's not as good as the original Foundation stuff, but for be it's certainly better than the Robot and later Foundaton books. The thing that has received the most criticism, including form Asimov, who didn't wish it to be included, is the use of the constitution. While I agree it is implausible that it could totally revolutionize the Galaxies government, I don't think that's what's important. They only have to think it has that power. Though The Constitution would probably not be effctie for governing 50 planets, the charcters in a book are leading a revolution, and they need it as a symbol more than anything. Well, that's just my thought.

Great series and, yes, sadly out of print...

Published by Thriftbooks.com User , 15 years ago
To correct a few people here, there are (were) actually three books in the 'Galactic Empire Series'. The Stars, Like Dust: A novel of the days when warring star kingdoms wrought havoc, before Trantor gained ascendancy in the galaxy. The Currents Of Space: A novel of the period when Trantor ruled only half the galaxy, and every independent kingdom guarded it's right to corruption. Pebble In The Sky: A novel of the time when Trantor ruled the galaxy, while Earth dreamed of it's ancient glory - and plotted revenge. From the '87 and '89 Ballantine/Del Rey printings of the series... IF you can find them, and read them, you would enjoy them... I think the series is a great 'pre-Asimov' set for readers new to his writing. IMO...

Published by Thriftbooks.com User , 19 years ago
"The Stars, Like Dust" is either the first or second novel, chronologically, in Asimov's Empire Series, depending on whether you believe the consensus (first) or Asimov's Author's Note in Prelude to Foundation (second). Nonetheless, it probably doesn't matter a great deal, the other contender "The Currents of Space" has Trantor as just another would-be empire, and this novel doesn't see any need to bring Trantor into the story. In all other respects too, there's little to connect either book, no common characters, political forces, no anything, beyond a shared past where Earth is radioactive. So read either book in any order you wish. In case it hasn't been hammered in yet, the Empire books form the middle of Asimov's Robots-Empire-Foundation universe timeline.Beyond that, this is a nice piece of SF that George Lucas wouldn't have trouble making a film around. It's the old story - Boy loses father in confusing circumstances, boy goes to take what is rightfully his and possibly avenge his father's murder at the same time, boy is being chased by mysterious murderous groups, boy meets girl, boy and girl hate each other, boy and girl fall in love... well, ok, it's not the old story, it's half a dozen old stories in one, but it's a good thriller and mystery with enough twists and turns to please anyone.It's also mercifully short, the characters are fleshed out in a most unasimovian way, and the science is there but not stupifyingly overbearing. My edition includes an apology at the end from the master about his assumption that a lifeless planet would have an oxygen-rich CO2-free atmosphere, and while I know roughly which part of the book is being refered to, it wasn't a big deal.In all, I think I prefered The Currents of Space, but there's no reason to read one in favour of the other rather than read both. If you can find a copy, and you're after some intelligent light entertainment, you could do worse than read this.

Not too bad, but not Asimov's best

Published by Thriftbooks.com User , 20 years ago
As the first Empire novel, this introduces us to the state of the colonized galaxy far in the future, after the events of the Robot novels have played themselves out. The Earth is a radioactive cauldron, inhabited only in carefully chosen locales. A student near to graduating is suddenly thrust into danger as a bomb is discoverd in his closet. It becomes clear that it must have been placed by the same faction that arranged for the death of his father, a prominent political figure. This young man is thus forced to flee Earth and seek assistance from a contemporary of his father, one who may be able to offer him asylum from his pursuers. Of course, though, Asimov makes sure that things in life are never easy, as we can all relate. Refused assistance, he must flee still further, with the skein becoming more tangled as the chase proceeds. Eventually, he deduces the murderer's identity, and a confrontation must follow. The result helps set the stage for a human Galactic Empire, begun in Robots and Empire, in which the source of Earth's radioactive nature was initiated, paving the way for galactic colonization, and in fact forcing humans to leave Earth as it became more uninhabitable. It is interesting that Asimov was able to incorporate all three of his epic series into a single long narrative of future history. As the first Empire novel, this book is nevertheless not the most necessary for continuity of the storyline, but it is still worth the read.
Copyright © 2020 Thriftbooks.com Terms of Use | Privacy Policy | Do Not Sell My Personal Information | Accessibility Statement
ThriftBooks® and the ThriftBooks® logo are registered trademarks of Thrift Books Global, LLC