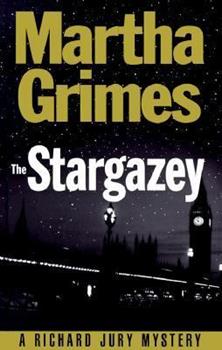 (Book #15 in the Richard Jury Series)

This description may be from another edition of this product. November. in a bleak month, a bleak Richard Jury takes an aimless ride on one of London's icons--the old double-decker bus, a # 14 traveling the Fulham Road. His attention is caught by a woman "with...

Published by Thriftbooks.com User , 22 years ago
I loved this book - can't understand a couple of reviewers who didn't. Maybe the coincidence with the identical looking women was a bit far-fetched, but what of it? I think Martha Grimes has a great sense of humour - she had me chuckling my way through the book! And I absolutely adore Melrose Plant - except I wish he still had his titles, especially when most of the people around him still use them! I just wish Jury would stop falling for women who end up dead a chapter later. Also, what's the go with Vivian? Is she secretly in love with Melrose or Jury or am I reading too much into it? Anyway, I hope Martha Grimes keeps writing this series - I absolutely loved this book and I'll be waiting anxiously for further ones.

Published by Thriftbooks.com User , 22 years ago
Who cares what the mystery is, or whodunnit, I just want more-more-more of Martha Grimes' characters. I've savored all of her books, for many years, primarily because I love her quirky characters and places. Poor, bleak Richard Jury, the psychosomatically ill deputy, Cyril the cat with 99 lives, the eccentric neighbor Carol, the wicked antiques dealer, Vivian and her vampire count, the very dirty London slum family, but oh.... Melrose. Be still my beating heart. I have a serious crush on Melrose. Martha, could you, in your next installment, find it in your heart to set us up on a blind date?

Published by Thriftbooks.com User , 22 years ago
This is one of my favorite Grimes mysteries. And I must give all the kudos to Melrose Plant in this one. He practically solves everything single-handedly while Jury wanders around in a fog of loneliness, depression and pain. If he falls for another wrong woman, I am going to scream!!! His personal problems so overwhelm him in this one, he can't even figure out why the dead woman and his mystery woman look alike. This, to me, was quite obvious and I usually never solve any part of mysteries before the author decides to explain. Of course, I didn't have it ALL figured out, but the mysterious look-a-likes, yes. Anyway, this book is Melrose's chance to really shine as a detective which is fine with me as I like him almost better than Jury. The mystery kept me turning the pages and I like the way Martha Grimes ties it all together. As always her characters are finely drawn and interesting. Not only is there the regular mystery, but there remains the mystery of the all the protagonists' personal lives that captivated me. In the last few books and especially in Stargazey, Jury seems to be building up to some big explosion or implosion. He seems to be so isolated and lonely, especially in Stargazey. This book really leaves him in a fog. I can't wait for the next one because I really hope that Jury and his blond temptress finally get together. And I really need to know what's up with Viv-Viv, as Trueblood irritatingly calls her. Does she or doesn't she care for Melrose? And if that didn't complicate things, Melrose seems to have something going with Beatrice, a wonderful, zany character, who compliments his fun side well. Maybe it IS time for Vivian to marry Count Dracula and disappear to Italy once and for all. Ms. Grimes, I await on pins and needles.

Published by Thriftbooks.com User , 22 years ago
Yes, it is a bleak November. Isn't London always bleak in November? And, yes, Superintendent Richard Jury of Scotland Yard hops on one of the red doubled deckers and rides Bus No. 14 down the Fulham Road toward Fulham Palace. (Bus No. 14 is easy to find--you can pick it up in front of Harrods!) Indeed, in this book, you are in for a ride! Martha Grimes once again evokes the landscape and atmosphere of London in yet another of her intriguing mysteries named after an actual pub in England. Once again she compels her readers (in this the 15th in the series) to stay to the very end with prose that is finely diced and clearly applied--and delightful to read. Grimes has a particular knack in evoking a profusion of literary allusions and of creating characters that hold one's attention, fully. In "Stargazey," Grimes indeed continues to lead us with her array of memorable characters as she tweaks and twitches the very nub of British life--or at least the life of the well-to-do. And she manages this coup, customary that it is with Grimes, with a sense of humor that borders on the unexpected. This American author spends time, obviously, in the UK for her research and she knows the country (and countryside) well; she espouses the vernacular like a native! One important issue, however, is that if you are a new reader of Grimes, keeping the characters straight and not being able to understand references to earlier escapades/cases must be confusing. It is essential that readers begin with earlier Grimes books for the full impact of this one; however, it is still worth the read! (Lastly, don't look for the Stargazey pub anymore. About three months before the book was published, new owners/managers took over and changed the name. The pub's still there, but it's not the Stargazey. And the decor has been changed as well. Tis a pity. But the bus ride is well worth the effort, and, if nothing else, get back off the bus and try the tea at Harrods. Now THAT'S worth a trip to England!)

A winner by the mistress of mystery

Published by Thriftbooks.com User , 23 years ago
In London, Richard Jury, being bored, rides a double decker bus to pass time. Things become a bit interesting when a woman enters, leaves, and reenters the bus. When she finally gets off for the last time, a whimsical Richard decides to follow her for the hell of it. He tracks behind her until she enters Fulham Palace.The next day, Richard learns that a woman, fitting the description of his fellow passenger frrm the day before, has been found murdered at Fulham. He wonders if he could have done something different, like following her onto the grounds of the palace, in order to have saved her life. Feeling a bit guilty, he begins to investigate, with the help of his eccentric friends, what happened to this woman.Harriet Klausner
Copyright © 2020 Thriftbooks.com Terms of Use | Privacy Policy | Do Not Sell My Personal Information | Accessibility Statement
ThriftBooks® and the ThriftBooks® logo are registered trademarks of Thrift Books Global, LLC