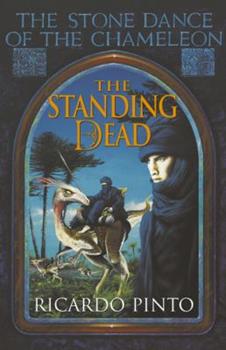 (Book #2 in the The Stone Dance of the Chameleon Series)

In this lush and powerful sequel to The Chosen, Pinto continues his unique fantasy series about power and madness . . . and the depths to which a man will sink for love. This description may be from another edition of this product.

Brilliant, even better than the first

Published by Thriftbooks.com User , 12 years ago
The Stone Dance of the Chameleon series has really caught my attention and impressed me. Even better: it has made me think, and is one of those books which has stuck with me even after I've put it down (putting this book in particular down, by the way, was quite difficult - I suffered many tired mornings at the office because of it!). Before you read The Standing Dead, you have to read the first book in the series, The Chosen. I won't repeat the review I wrote for The Chosen, except to say that it started off sluggish, but I stuck with it and it picked up steam halfway through. By the time I finished it, I was thoroughly captured by the characters, the world, and the plot, and I luckily had book 2 (The Standing Dead) waiting for me on the shelf which I immediately began reading. Personally, I did not find The Standing Dead slow at all, and I tore through it quite a bit faster than the first book. Unfortunately, I did not have the third book (The Third God) on the shelf waiting for me, and am currently (eagerly) waiting for it to arrive in the mail. About the story itself: this is the continuation of the story of Carnelian and Osidian, after being kidnapped. I don't want to ruin anything - but the kidnapping, and being forced to live in exile, has serious effects on both of them and on their relationship. Carnelian seems to want to move on with life and start over somewhere, while Osidian develops a powerful obsession with the idea of revenge. Many people will get wrapped up in Osidian's plans, and become pawns in his plotting. There are a LOT of innocent (and not-so-innocent) bystanders here. Be prepared for graphic and disturbing gore. It almost seems like we are helplessly watching events unfold through Carnelian's eyes. You want to be on Osidian's side, but over the course of the story you see him slowly go further and further off the deep end until he is a completely different person. One of the main strengths of this book are its characters. They are very, very real characters in very screwed up situations. Anyhow, fantastic series. One I would highly recommend (with the advice that you a prepared for a dark story)

Published by Thriftbooks.com User , 13 years ago
Kidnapped to be buried alive a matter of days before Osidian is to become God Emperor, he and Carnelian are unwittingly reprieved, only to be destined to be sold into slavery as trophies. But even from that fate they are rescued only to become captive of the Plainsmen of Earthsky To effect their own escape the Plainsmen plan to leave the two Masters behind as a decoy, but in a snap decision Carnelian pleads with them that they take him and Osidian with them. As they struggle for survival finding a circuitous route to Earthsky, with Osidian ever weakening with fever, Carnelian becomes drawn to his captors and is prepared to make his way with them, but will Osidian, if he survives, so readily accept such a fate? Above all it is the character Carnelian who makes the story so compelling; young as he is, his strong sense of loyalty, love and compassion, and his vulnerability cannot fail to win the reader's heart. It is those very qualities that make the dilemma of his situation so difficult, and the restraints he imposes on his growing relation with Fern especially touching. An enthralling sequel to the Chosen and perhaps even more captivating and more readily accessible, The Standing Dead is a brilliantly conceived story. Pinto creates a fantastic and vividly portrayed prehistoric landscape, an environment at times luxuriantly rich in flora and fauna, but at other times arid and unbearably hot. The suffering Plainsmen lead a tribal life rich with its own customs; it is not surprising that Carnelian is drawn to theses close knit people as he sees the suffering the domination of the Masters causes. But it is not long before Carnelian realises that he may be the cause of something even worse, the very downfall of everything here he has come to cherish.

Another great book by Pinto

Published by Thriftbooks.com User , 16 years ago
What a pleasure is to read a book so well written. Pinto continues developing the world introduced in The Chosen with a richness of atmosphere and characters that makes one savour every sentence as if it were delicious food. The plot and characters have the depth and complexity one only finds in series like Dune or Hyperion, and one can't help but caring for all of them. I highly recommend this book and the series. I can't wait for the third installment!

A struggle for substance

Published by Thriftbooks.com User , 18 years ago
In 2000's highly acclaimed "The Chosen", debut author Pinto chose style over substance and vision over plot. And he did so with some brilliance. "The Chosen" was, summarily put, an intelligent and convincing (if somewhat gruesome) portrayal of an oligarchic and dominant master race - "The Chosen", or "Masters" - caught up in their internal feuds and machinations, whilst around them simple humanity suffered in their name in a world somewhat reminiscent of, say, old China.The problem with "Chosen" was, however, both simple and profound: it had little or no plot. It was a wonderful - even grand - canvas, but it hardly moved an inch.In "The Standing Dead" - the second part of what seems to be a trilogy - Pinto has had to face this drawback by attempting to to drive the story forwards. He's done so bravely, but with less than perfect results. Essentially, the story in "Dead" takes off where "Chosen" left off: with Pinto's protagonist Carnelian, along with his new-found lover Osidian, being held captive by what turns out to be a simple bunch of slavers. On their way to cash in on their prize, the slavers are attacked by Tribesmen from the Outer Reach (a people dominated by the Chosen and forced to proffer a number of their childern as slaves regularly, but otherwise left generally unmolested). Carnelian and Osidian are then taken by the Tribesmen to their home - the Koppie - where Carnelian becomes enamoured of the local customs, whilst Osidian becomes an increasingly dominating and debilitating force in the local community, slowly destroying their (imagined) rural peace.The rest of the story follows these lines - Carnelian's basic goodness and Osidian's essential decrepitude being portrayed in equally stark measure - without hardly a single twist (or even an occasional surprising insight) to enliven matters. What this means is that, in terms of plot, "Dead" is basically a one-way street. You can see what's coming, then it comes. And then it comes again. And throughout, you find yourself wondering, with increasing puzzlement, why Carnelian (or anyone else you may care about, for that matter) doesn't simply *do* something, instead of letting all hell slowly settle around them. Given "Chosen's" weakness (style over substance, vision over plot), this is not that surprising. Whilst Pinto does try to provide a better storyline this time round, he's still struggling. He's great at painting portraits, at depicting static visions - but he's still not good at action. In fact, he doesn't seem to understand the concept all that clearly: "Dead" hardly contains a character that seems alive - that appears capable of moment of his or her own accord. To put it another way: Pinto's moulding his cast to fit his vision, instead of allowing them to embody that vision themselves. And, more strongly than in "Chosen", the vision we're talking about is ultimately one of horror: this book doesn't end on a happy note, to say the least. That ending, by the way, reminded me of a

Published by Thriftbooks.com User , 18 years ago
Masters Carnelian and the God-Emperor elect Osidian are lovers. However, the latter's enemies have slavers kidnap them. The duo is fortunate that the nomadic Ochre tribe rescue them on the dangerous Earthsky. Carnelian, who grew up outside the hedonistic capital of the Three Lands, Osrakum, adapts to the tribe's way of life and quickly becomes assimilated. On the other hand, Osidian is in a depression but also believes these wild wanderers are beneath him and fails to communicate with anyone except his lover.As Osidian heals in mind and body, he becomes angry with those who betrayed him. He seeks vengeance and realizes this tribe is the first cannon fodder tool to succeed. Carnelian tries to talk him out of it as he enjoys his new lifestyle and just wants to live in peace. However, the charismatic Osidian begins rallying the impressionable young around his cause while Carnelian attempts to stop the rising tide.As he did in his first book THE CHOSEN of the Stone Dance of the Chameleon trilogy, Ricardo Pinto paints an extremely complex world filled with deep social systems. The varying races and tribes seem so authentic and the Masters come across as the ruling God-like upper caste. Though it helps to read the first novel because the audience will have a greater understanding of the predicament that the lead couple face at the start, fans of violent barbaric fantasy that hides nothing will appreciate the middle endeavor.Harriet Klausner
Copyright © 2022 Thriftbooks.com Terms of Use | Privacy Policy | Do Not Sell My Personal Information | Accessibility Statement
ThriftBooks® and the ThriftBooks® logo are registered trademarks of Thrift Books Global, LLC