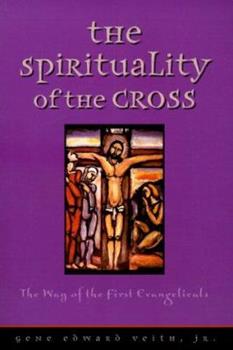 The Spirituality of the Cross: The Way of the First Evangelicals

This description may be from another edition of this product. Veith explores and presents a true understanding of justification by faith, the means of grace, vocation, theology of the cross, the two kingdoms, worship, and the church.This is a revised edition of...

Published by Thriftbooks.com User , 15 years ago
Gene Edward Veith, Jr. is a professor of English at Concordia University (Mequon, Wisconsin) and Culture Editor at World Magazine. He is also a man who has had a rough go at finding an adequate Christian denomination. During his earlier years, he had been involved with American Evangelical church bodies, Liberal Protestant church bodies, and others...but finally became a faithful member of the Lutheran Church--Missouri Synod. Veith writes this book in part to reflect on his own spiritual journey--to record what most attracted him to Lutheranism. He writes in part to explain what makes Lutheranism unique among the various Christian denominations. He writes in part to members of other Christian denominations because he thinks they can learn a lot from the Lutheran take on various spiritual/doctrinal/practical matters. The end result, "The Spirituality of the Cross," is an excellent book that summarizes the unique theological outlook championed by confessional Lutheran Christians. This book does not deal with basic points of Christian doctrine (e.g. the Trinity, Christology), but rather deals with aspects of theology in which Lutherans neither "side" with Roman Catholics nor Eastern Orthodox nor Baptists/non-Denominationals nor liberal Episcopalians/Presbyterians/Methodists nor five-point Calvinists. These topics include: Justification (neither free will nor predestination yet still faith alone by grace alone); The Means of Grace (how God gives his gracious gift of saving faith to a person--through deceptively ordinary means); The Theology of the Cross (more about how God showers the richest blessings on his people through deceptively ordinary means; why the cross is central to a Lutheran understanding of God; why Lutherans don't buy into the idea that great faith leads to earthly wealth; why bad things happen to people) Vocation (why Lutheran pastors say, "I forgive you of all your sins in the name of the Father and of the Son and of the Holy Spirit;" why a garbage man is just as honored and esteemed as a pastor or a CEO just as honored and esteemed as a housewife; how one should go about his calling/career; the Christian ideal of mutual dependence) Living in Two Kingdoms (how a Christian is to balance the facts that he is a forgiven child of God with heavenly citizenship while living in a sinful world; why Christians can be proud of their vocation as judge, soldier, or public executioner) Worship (that a Christian is served by God in worship, not vice versa; why we use the objective, emotionless historic liturgy instead of emotional, ever-changing praise-band forms of worship). The book ends with a reprint from an article Veith wrote for Touchstone Magazine that introduces Lutheranism (60 million strong worldwide) to Catholic/Orthodox and Protestant readers. In all, Veith does an excellent job of identifying some of the idiosyncrasies of the Lutheran understanding of the Christian faith, fully explains them (both theory and an

Published by Thriftbooks.com User , 20 years ago
This is a terrific book for those who'd like a well-thought out, eloquent apologia for confessional Lutheranism. Mr. Veith explains his own pilgrimmage and how he found a spiritual home in the Lutheran church. I'm surrounded by Lutheran churches in my area but have come to a new appreciation of the uniqueness and richness of Lutheran theology and worldview. For those dissatisfied with pop evangelicalism, a seeker-sensitive/church growth approach, and/or charismatism, watch out -- this book could well change your outlook and life! Highly recommended.

Published by Thriftbooks.com User , 20 years ago
This book of Gene Edward Veith's is not a thick tome burdened with theological jargon; it is well-written book on Christian faith and how it influences the living of life. I suppose Veith could have titled the book, The Theology of the Cross: The Way of Lutherans, for he makes a very valid point on how Lutherans are considered the first Evangelicals. In truth, Luther himself preferred the moniker Evangelical Catholic, with catholic being used to mean "universal."I especially found Veith's chapter on vocation quite compelling. Each person has a calling to be many things: a citizen, a mother or father or child, a worker, et cetera. Many things have happened to bring a person to a particular point in life. If a person is a parent, then as his vocation he should do the best he can at it. Of course, this is a very inelegant, abbreviated (and terse!) way of explaining one's vocation. It would be much better to read the book.In short, this is a lucid book on faith and sanctification. Yet, the book is not a "how-to" book reduced to giving out tips from the Bible. This book centers on the Christian faith and the living of it, with some of the focus being on Lutheran thought and belief. This book will edify the reader, cause him to think, and turn even more the to revealed Word: Scripture and the God-Man, Jesus.

Published by Thriftbooks.com User , 21 years ago
I heard about Dr. Veith's book in the Lutheran journal "Logia," which bragged it up. Logia was absolutely on the mark! The book is an honest, deep, and visceral explanation of Christianity, as practiced by true Lutherans. It is easy to read and written from a layman's point of view. As a young (27) Missouri Synod Lutheran, I have to say that Dr. Veith did an wonderful job of distilling many of the truths contained in the "Book of Concord" (the complete doctrinal book of the Lutheran Church) into a direct, to-the-point book.The book should be required reading for Lutheran confirmation classes and is a great introduction for Christians and non-Christians interested in Lutheran Christianity. Soli Deo Gloria :)

Published by Thriftbooks.com User , 21 years ago
Excellent discussion of Lutheran theology from a profesor of English who takes us on his own spiritual journey that ends with Lutheranism. He favors a Missouri Synod approach, but his thoughts about faith and grace, redemption and sanctification helped me to put my Lutheran faith into perspective. Dr. Veith draws distinctions between Lutheran thinking and both "evangelical" and "catholic" views without being negative about them. I recommend this book to anyone who has questions about Lutheran beliefs who want an easy reading answer. The book is NOT a dogmatic treatise and is suitable for new believers. It could also be very useful for small group or catechetical instruction.
Copyright © 2020 Thriftbooks.com Terms of Use | Privacy Policy | Do Not Sell My Personal Information | Accessibility Statement
ThriftBooks® and the ThriftBooks® logo are registered trademarks of Thrift Books Global, LLC