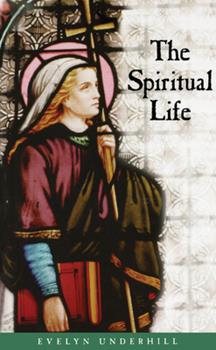 Presents some great truths concerning the spiritual life in simple language. "...one of those rare books which may be taken up again and again, each time providing fresh insight and inspiration for whomever is earnestly seeking to live the spiritual life". -- Rays from the Rose Cross

Published by Thriftbooks.com User , 14 years ago
This classic by one of the 20th century's great spiritual directors is a good beginning in understanding her life and evolution. It's also a spiritual guide for us all.

Published by Thriftbooks.com User , 15 years ago
Evelyn Underhill was one of the great Anglican thinkers of the first half of the 20th century, a group that includes Dorothy Sayers, C.S. Lewis and G.K. Chesterton (before his conversion to Rome). Her book "The Spiritual Life" was originally part of a series of broadcasts made prior to World War II. She published them in book form, in order to "present some of the great truths concerning man's spiritual life in simple language." She thoroughly and eloquently achieves her goal. The present edition is an attractive reprint by Morehouse Publishing, and is part of its "Continuum Imprint" series, a series of reprints of great Anglican classics. I used Underhill's "The Spiritual Life" as the text of our 2006 Parish Retreat, and although it was a challenging read (definitely 'steak' as opposed to 'hot dogs'), it was very well recieved. One of my favorite quotes from the book is as follows: "We mostly spend our lives conjugating three verbs: to Want, to Have, and to Do. Craving, clutching, and fussing, on the material, political, social, emotional, intellectual--even on the religious--plane, we are kept in perpetual unrest: forgetting that none of these verbs have any ultimate significance, except so far as they are transcended by and included in, the fundamental verb, to Be: and that Being, not wanting, having and doing, is the essence of a spiritual life."

Reflections on the Spiritual Life.

Published by Thriftbooks.com User , 15 years ago
God is the only reality, and we are only real in so far as we are in His order, and He in us. - Saint Augustine. _The Spiritual Life_ first published in 1937 and republished by Morehouse Publishing in North America, by the mystical writer Evelyn Underhill consists of a pertinent discussion of spirituality which may be suitable for Lenten reading. Evelyn Underhill (1875-1941) was an Anglo-Catholic writer on mysticism who presented the writings and teachings of medieval Catholic mystics to a Protestant audience. Her writings are very beautiful and have much to say for the would-be adept who attempts to undertake the mystical life. This short book consists of a series of broadcast talks given by Underhill. These talks deal with practical advice for the undertaking of the spiritual life. Evelyn Underhill bases much of her discussion on the writings of the saints, in particular Saint Augustine, Saint Francis of Assisi, Saint John of the Cross, Saint Catherine of Sienna, Saint Catherine of Genoa, and Saint Ignatius. She also mentions the mystical writings of Jacob Boehme, the writings of her mentor the Roman Catholic philosopher and mystic Baron von Hugel, and the writings of the theologian Karl Barth. Her discussion is meant largely for Christians who seek God (the Absolute Reality) in their lives. She notes how one must overcome struggles with anxiety to eventually find the spiritual life. She also notes how one must apply one's spiritual existence to daily living and even to politics so as to seek a proper spiritual understanding of things in concordance with the Will of God. The book consists of four talks: "What Is the Spiritual Life?", "The Spiritual Life as Communion with God", "The Spiritual Life as Co-operation with God", and "Some Questions and Difficulties". The book also ends with recommendations for reading for beginners in the spiritual life, noting the importance not only of Holy Scripture, but also other spiritual sources. In her section on questions and difficulties, she explains the nature of God, faces the problem of evil and what this says about the nature of man and God, and argues that one must seek God in daily life and routine (particularly those who may have little time to engage in spiritual reflection because of their other duties). This brief book offers much of sustenance to those who seek the spiritual life. It shows how one must overcome oneself and overcome one's anxieties in life to achieve communion with the Absolute. It will be sure to provide much spiritual nourishment for those brave seekers who attempt to live their life in God.

Published by Thriftbooks.com User , 23 years ago
I ended up highlighting nearly every paragraph of the book! Very refreshing for thirsty souls.
Copyright © 2020 Thriftbooks.com Terms of Use | Privacy Policy | Do Not Sell My Personal Information | Accessibility Statement
ThriftBooks® and the ThriftBooks® logo are registered trademarks of Thrift Books Global, LLC