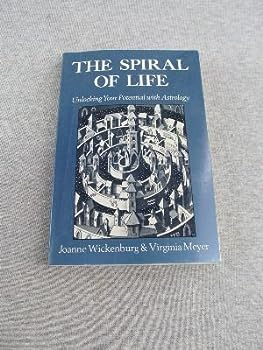 The Spiral of Life: Unlocking Your Potential With Astrology

The Spiral of Life weaves together the details of the birth chart so that readers become both more proficient at interpretation and also more deeply aware of their own personal talents and challenges.... This description may be from another edition of this product.

Published by Thriftbooks.com User , 13 years ago
I checked this book out from Florence SC library several times back in 1989-90,... a concise, insightful, meaning-filled read... one I found myself referring to quite often during those months of exploration of the arcane possibilities Astrology presents - that fertile ground between psychological logic and intuitive art of which, at present, Astrology seems comprised. Not a book for the novice, but, once basic ideas are understood, it adds to ones sets of concepts... laying them out in a fashion readily understandable and importunate in scope. A grouping of ideas each building on the next, indeed rather "Spiral" in import. (Though, as I recall, the last 30 to 40 pages went into areas more specialized and of minor concern... 'the part of fortune' and such. Of all the Astro. books I've perused this was one of two that seemed most significant to me. In the next few years I did personal 'thought experiments'; guessing planet placements of friends, aquaintences and media 'celebrities' that I had some feeling for; knowing only their date of birth. I did this using intuition, (as opposed to setting down a list of facts and weighing the odds of one placement over the other). During those years my rate of success was more than twice what mere chance would allow. - This, along with a few other 'coincidential' discoveries led me to believe there really IS something to planet placements at ones time of birth. A few seminal ideas from this book were often at the back of my mind during those 'intuitive experiments'... I haven't really kept at the 'Astrology thing'. But this book is worthwhile. - This is my small 'testimony'.
Trustpilot
Copyright © 2022 Thriftbooks.com Terms of Use | Privacy Policy | Do Not Sell My Personal Information | Accessibility Statement
ThriftBooks® and the ThriftBooks® logo are registered trademarks of Thrift Books Global, LLC