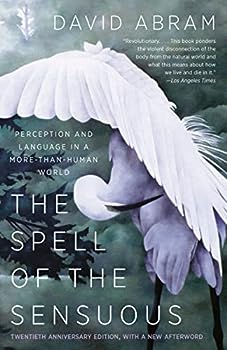 The Spell of the Sensuous: Perception and Language in a More-Than-Human World

Winner of the International Lannan Literary Award for Nonfiction Animal tracks, word magic, the speech of stones, the power of letters, and the taste of the wind all figure prominently in this... This description may be from another edition of this product.

The Spell of the Sensuous

Published by Thriftbooks.com User , 16 years ago
David Abram has written a remarkable book that deals with the effect of phonetic based language on how we perceive the world. He also looks at the nature of time and space from an aboriginal point of view. He draws on an eclectic array of sources and pulls everything together quite well. The chapters pertaining to the thinking of Edmund Husserl and Maurice Merleau-Ponty are not easy to read but are worth the effort. Overall the reason I rated this book so highly is because of the originality of Abram's ideas and because they have huge implications for our daily life. Be forewarned that this book deals with significant issues and is not light reading.

Great book that explains a lot

Published by Thriftbooks.com User , 17 years ago
This book lays out, in a very clear and readable, yet sophisticated, manner something that I have been struggling with for years. When I was younger I spent a lot of time with animals and loved to be in the forest. I learned a lot about human nature by learning about animal nature. Since then, it seems all of my education (a bachelor's, master's, and about to enter a PhD program) has "taught" me that all of that learning I did was useless, illusory. Something in that never quite sat right with me. It seemed, and still seems, arrogant, ignorant, unrealistic, and self-aggrandizing. Abrams does an excellent job of summing up what that feeling was about for me, while also providing a compelling argument for how the state of our (industrialized civilization's) knowledge gaining and knowledge sharing processes came to be what they currently are. He then frames the problems with this state of affairs and suggests, but does not fully outline, a solution. This book does not espouse that we return to mythologizing as a means of relaying knowledge from one generation to the next. Abrams does not hold that native, oral-based cultures possessed the "truth" in their worldviews, as some other reviewers seem to think he does. (Anyone who is still looking for "the truth" has clearly missed the boat that sailed 100+ years ago with Hume and Nietzsche.) Instead, what he is saying is that in the transition from an oral-based language, one that referred back to the world in its sounds and characters, to a purely written, phonetic language that refers back to nothing but itself, we have lost a vital link with our earth. Losing this vital link via language has led us to be estranged from the places that we live, forever locked into ourselves, in a near-constant internal dialogue about our own beliefs and ideas. If one doubts that this is the case, consider only the view of human nature that philosophers as varied as Descartes and Sartre have held, and even the current "cognitive science" model of human cognition: all are grossly self-involved. Our purely phonetic language encourages us to dwell on our own internal problems and processes, while also not encouraging us to look outward to deal with problems and processes outside of ourselves. I think it is fairly obvious that this has a very real, and very important, applicability to the current crisis we face, especially in industrialized nations, where it seems that all anyone has any interest in is self-realization, self-actualization, and self-fulfillment. What if all that focus on "self" has caused us to forget that our "selves" are really nothing at all without other "selves," including the non-human selves we depend on for oxygen and energy? Finally, Abrams does not suggest that language alone is responsible for this current state of affairs. For example one other influence he cites is the switch from hunter-gatherer to agricultural society. He mentions this, and others, at the end of the book,

I'm waiting for his next book

Published by Thriftbooks.com User , 19 years ago
I read this and loved it. Afterward, it occurred on me that I wouldn't be able to find anything as good for quite a while so I immediately read it again. Sure its about the intertwined relationship of our perceptions, language and the environment. I expected that. What I didn't expect and was very surprised by was how, after reading 80 or so pages, I walked outside and the world looked very different, much more alive and involving than before. I think that maybe after a new kidney or heart for the sake of a transplant, this may be the best present I could get. Its a great primer for folks lost in the muck of analytic philosophy about the world they live in. And for the people that don't care about philosphy, its like a wonderful love letter to the earth. This book rocks. I am anxiously awaiting the next book from David Abram. I've been waiting for about 4 years now. Dave, are you listening? We want another book. Thanks.

Being fully human is not just about "people"

Published by Thriftbooks.com User , 21 years ago
We live in a culture that is immersed in a futile solipsism of self-help philosophies based exclusively on how we interact with other human beings.David Abram's landmark work, "The Spell of the Sensuous", jolts us out of this dim matrix with the power of a shaman who heals a terminal case of psychic amnesia.We have become so institutionalized as social creatures that we have forgotten how many of our mental dislocations are not the results of social interaction, but stem from a lethal rejection of our connection to non-human elements.Using a formidable writing style that conjures up a rapturous kind of sensory splendor, Abrams seduces the reader into "re-approaching" the very elements that constitute our living Universe. In the process, he reinvigorates our understanding of what it is to be not merely "human", but also an intricate part of a much broader existence. Once this is understood, one can be "informed" by the whisperings of the wind, the implicate energy of a tree, or the painfully beautiful colours of an autumn sky.Scan the shelves of the self-help section at any large bookstore, and you can count on the fingers of one hand the books that deal with anything other than how to act/respond to/ignore/interpret/ make the most of/"don't sweat", etc., the actions and intrusions of other people. Here, at last, is a meditation on the expansive vistas of everything else that surrounds us, and how a reconnection to it all is a fundamental part of the balanced life."Going within", in the mystical sense, cannot be accomplished in the absence of "going out". Perhaps, in the end, the two are in fact one. It is a known fact that the iron in our bodies originates from the cosmic furnace of suns - that what we are, in the deepest physical sense, is part of an overarching, stellar dance of utterly universal proportions. David Abrams makes you feel that connection. He makes you actually feel it.If the bland diet of talk show inspired pabulum leaves you slightly jaded, read this book. The world will be transformed from shadowy monochromes to rich gradations of scintillating colour.

Put down your books; learn to read the world around you. . .

Published by Thriftbooks.com User , 21 years ago
The Spell of the Sensuous reveals how our Western worldview has evolved to be based on literacy, abstract thought, and separation from the body. By "the body" I mean not just our individual, animal bodies, but the body of the earth and the material cosmos. By removing ourselves from this sensuous realm, we have lost the connection to "the living dream that we share with the soaring hawk, the spider, and the stone silently sprouting lichens on its coarse surface." There is a paradox here, because Abrams' book exposes the drawbacks of literacy and abstract, logical thinking. But it is itself a piece of very well-argued written discourse. However, it works, and not just because Abrams' arguments are so convincing. Part of their power stems from the fact that Abrams is an artist; he has the gift of using words and imagery that can reach below the logical brain to inspire a more direct way of perceiving the world. The result is a book which is a moving combination of philosophical writing and pure poetry. Abrams works from a phenomenological standpoint, and the book begins with a discussion of phenomenology's history and major ideas.* This is a readable and unintimidating introduction to the subject. Abrams then proceeds to show how, starting at the time of alphabetization, the Western mind began to grow away from direct physical knowing of the world and toward abstract, conceptual representations. Our language became removed from nature, and helped us to remove ourselves from it and to inhabit an almost entirely human-centered world. As a counterpoint to the Western use of language, Abrams goes on to show how people in non-literate cultures use language as a way to connect with the body and the physical realm. In these oral cultures language "is experienced not as the exclusive property of humankind, but as a property of the sensuous life-world." In other words, the world--the animals, plants, stones, wind--speaks a language that most of us can no longer hear. Abrams explores indigenous oral poetry and stories to illustrate this entirely other way of experiencing language. My first reading of this book triggered a conversion of sorts. It spun me 180 degrees, from the world of concepts to the world of immediate perception. I'm on my third reading now and still incorporating teachings passed over previously. I am finding that returning my gaze to the uninterpreted physical world is a difficult practice, as I have been conditioned (like most Westerners) to run my experience through a filter of concepts and judgments. But, like meditation, this practice can help to loosen one's psyche from its "mind-forg'd manacles." For this reason, The Spell of the Sensuous is really a manual for liberating one's inner and outer vision. *Phenomenology is the study of how we experience consciousness. Unlike many branches of philosophy which rely on arguments built in logical steps, phenomenology is more about how we perceive and feel the immediate play of event
Trustpilot
Copyright © 2022 Thriftbooks.com Terms of Use | Privacy Policy | Do Not Sell or Share My Personal Information | Accessibility Statement
ThriftBooks® and the ThriftBooks® logo are registered trademarks of Thrift Books Global, LLC