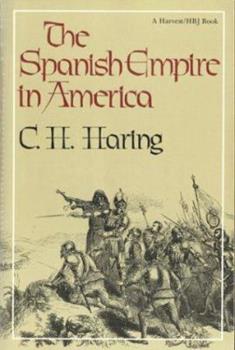 The Spanish Empire in America

Reviews the institutional history of the colonies established by Spain in the New World.

Published by Thriftbooks.com User , 20 years ago
By scholarly standards, this book should be out of date. However, Haring's book is still an excellent guide to the structure of government in Spain's former American empire. Haring goes into far greater detail about government than any other general Latin American textbook that I have seen. Of course, the book leaves out any indepth look at post-1940 obsessions such as class, race, gender, and culture, although Spanish high culture in America does merit a quick overview. Haring's greatest fault is allowing what we now call "ethnocentric" conceits to slip in here and there, such as using the term "savages" to refer to natives in America. If you can overlook that, then Haring's book really is a goldmine of information about how the Spanish tried to govern the New World.
Trustpilot
Copyright © 2022 Thriftbooks.com Terms of Use | Privacy Policy | Do Not Sell My Personal Information | Accessibility Statement
ThriftBooks® and the ThriftBooks® logo are registered trademarks of Thrift Books Global, LLC