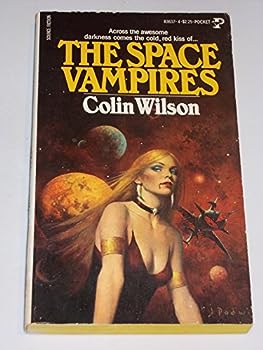 Circa 2100 A scourge of sex and death from an alien spaceship WHEN CAPTAIN CARLSEN ENTERED THE VAST DERELICT SPACESHIP, he was shaken by the discovery of its immobilized humanoid passengers.Later,... This description may be from another edition of this product.

A brilliant and thought-provoking Sci-fi novel.

Published by Thriftbooks.com User , 12 years ago
In the year 2100, astronauts lead by Captain Carlsen investigate a bizarre spaceship that resembles a European castle of old stories while exploring space. They look inside to find that it's like something out of a Dracula story even with weird paintings made from a space substance, Carlsen and the crew discover large dead Octupus-like creatures and lots of semi-nude humanoid beings preserved in special coffins as they decide to bring a few which is two females and one male back to Earth in London for research. However they do wake up and escape as they are vampire-like alien beings that drain energy out of humans to get power including inhabiting the bodies of sex-murder victims including possibly the Prime-Minister, a professor of criminology and real-life vampirism known as Falleda with a inspector named Caine join up with Carlsen on trying to find out a way of how to destroy these intergalactic soul-suckers or else humanity might be contamined. Intelligent and lovecraftian work of Sci-fi and horror fiction melded nicely by acclaimed author Colison Wilson. This one gives readers a unique and very refreshing approach on the vampire legend as these creatures have visited Earth before to create maps for humans mainly the greeks and even create the legends of vampires, succubi and other monsters of lore. But the core of this novel is that vampirism does exist as we are all vampires who drain energy from other things and the creatures here aren't like your father's vampires told in Bram Stoker or Ann Rice, these creatures have no fangs and suck only energy/youth/lifeforces out of beings instead. It's a story about discover and what if there was other life out there beyond our world, it is also a philosphil tale about what could be evolution's true link. The 1985 movie "Lifeforce" was excellent but very loose adaptation that goes more for sex, gore, zombies and that sort of thing but not close as this book though. If your looking for a very original and refreshing story about aliens and vampirism, i recommend reading this book.

Also known as "The Space Vampires"

Published by Thriftbooks.com User , 14 years ago
Loved the campy horror movie from the 80s...who knew it was based on such a dark and well written story. This is a surprising little gem of a novel...quickly read and "absorbed" if you will...gives a much more believable backstory that the movie ever attempted. A nice find after all these years...give it a try and be pleasantly rewarded...search for both titles in your local used bookstores...I found mine under Lifeforce...

Published by Thriftbooks.com User , 20 years ago
Gaining cult status fame from the film based upon it (Lifeforce), Space Vampires goes far beyond the screenplay giving rhyme and reason to the alien lifestealers and their actions. The surviving astronaut is a far more intelligent character and makes a good psychologist and detective - trying to understand what has befallen him and what is yet to follow. He travels Europe researching vampiric legend, is tempted by the heady thrill of sadomastic domination, and eventually confronts an extraterrestrial being with luciferian traits. Like fallen angels, the energy vampires seek to regain their former state of glory, a classic case of the end justifying the means. The book's ending is far more satisfying than the film's despite the latter's fun Hammer-horror feel, great Mancini score, and Mathilda May's glorious body. Enough to stir even the most space-frozen soulstealer to acts of volcanic passion...

Published by Thriftbooks.com User , 20 years ago
Nine years after first attempting a Lovecraftian sci-fi novel in The Mind Parasites, Wilson made another stab at essentially the same plot, and wrote it much better, as The Space Vampires (Lifeforce). The major difference between the two - aside from a noticeably more mature approach in The Space Vampires - is the addition of plentiful story-required sex.Wilson's plots never move briskly, but they often make up for it by being intellectually engaging. The Space Vampires is a quick and interesting read, contrasting extraterrestrial criminals with the more common garden variety found on Earth. Discussions abound on predation, and the precise nature of sex in general.Filmed as Lifeforce in '85, the movie retained the basics of the plot, but went inexplicably overboard in directions Wilson wisely avoided. It is still a watchable movie, but not as good as Wilson's original novel.

Not a novelization of the movie, the book came first

Published by Thriftbooks.com User , 22 years ago
It was originally titled The Space Vampires. The copy I read had a picture of a seductive woman on the cover with fangs and a trickle of blood. I put off reading it for a while because I thought it would be cheesy.However I was pleasantly surprised. While the movie wasn't bad, and was visually stimulating (especially the female "vampire), the book is much better. It contained more detail and contained many significant plot threads that were omitted from the film. If you have a chance to read this book, do so. I also enjoyed The Mind Parasites, also by Colin Wilson.
Trustpilot
Copyright © 2022 Thriftbooks.com Terms of Use | Privacy Policy | Do Not Sell or Share My Personal Information | Accessibility Statement
ThriftBooks® and the ThriftBooks® logo are registered trademarks of Thrift Books Global, LLC