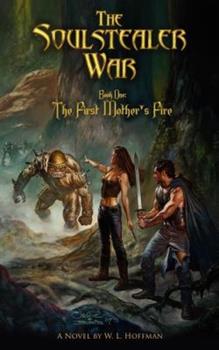 Unemployed after graduation, Kenneth McNary seeks inspiration on the Appalachian Trail. He never suspected that it would find him first. Ken is transported to a fairytale world by a god-like sentience and is tasked with uniting the world's denizens for a coming war-a war with eternal consequences for every soul consumed by the Enemy. While grappling with metaphysics and the dangers of his strange surroundings, Ken learns that the few humans inhabiting...

Great start to a Fantasy Series!

Published by Thriftbooks.com User , 13 years ago
First, please disregard the person that gave this book only one star. He only read two chapters. Seriously, how can you review or criticize something you know almost nothing about? That said: Awesome book! I actually read the whole book and thoroughly enjoyed it. It's one of those books that you seem to rush through because you want to find out what is going to happen next. Then all of a sudden you're at the end wishing there was more. All the elements of great fantasy are present. Excellent characters, cool magic, great fighting and of course a totally evil villain. The plot has many threads that could lead down some interesting paths. I can't wait to see where he takes it. The biggest downside is having to wait until the end of this year for Book 2 and Book 3 won't be ready for another two years after that. Mr. Hoffman needs to quit his day job so that he can spend more time writing. I'll have Book 2 on pre-order as soon as it becomes available. I also want to comment on the quality of the workmanship of the book. It is excellent. It is printed by a company called Dog Ear Publishing. The book is slightly larger than a standard paperback. The cover by Julie Bell and Boris Vallejo is beautiful. It was one of the things that first drew my attention to this book. The cover is glossy and the spine did not crack as in a standard paperback. Highly recommended!

Published by Thriftbooks.com User , 14 years ago
The author is a friend of mine from college, and I bought this book out of loyalty. I hadn't read any fantasy since high school, and I was quite sure my tastes had matured beyond swords and magic. Wrong. Reading this book was nothing like the chore I expected it to be. It was a lot of fun, and as I got towards the end I found myself staying up late because I couldn't stop reading. To my friend Bill, congratulations and thanks.

Published by Thriftbooks.com User , 14 years ago
"The First Mother's Fire", Book One of the new fantasy series "The Soulstealer War" by W.L. Hoffman, is a novel that was difficult to put down and is now proving impossible to shake. Certain books crawl inside you and take up residence for varying times and am guessing that this one is in for an extended stay. The novel is essentially a philosophy book that uses the genre of fantasy/sci-fi to present its queries, questions, thoughts and ideas. The protagonist, Ken McNary, provides the reader with an equal amount of ideas and theories as well as questions and queries. Thrust into an alternate but connected world, McNary struggles to make sense of his new environment while struggling with ancient questions regarding one's purpose, relation to the earth and environment, religion, and the origin, use and cost of true power. What is truly amazing about "The First Mother's Fire" is that Hoffman is able to present such weighty subject matter via an epic fantasy storyline with plenty of action and pacing. The philosophical subject matter is given its due deference but does not weigh down the story or the adventure into which the reader is transported. Rather, the questions and thoughts of McNary are natural parts of the strange experience in which he finds himself. Hoffman is clearly well-versed in the genre. One notes his respectful nod to the master Tolkien early in the novel with Ken's introduction to Hala echoing Frodo's introduction to Lembas. But Hoffman's book is far from a recycling of well-worn fantasy characters and plots as he takes the reader down refreshingly original and untrodden paths. The release of Book Two in the "The Soulstealer War" will be a welcomed date for this reader.

Published by Thriftbooks.com User , 15 years ago
I have been reading fantasy avidly for over 30 years and this book ranks among the best for its creativity and vivid imagery. Hoffman is a new writer in the genre but you wouldn't know it from reading the book. Its got a great twist in that the main character, Ken McNary, is a rugged survivalist with a legal background. His combination of physical strength and intellectual prowess were a welcome change from more typical fantasy protagonists. As for the alternate world that Ken travels into...it is awesome and the Boris Vallejo cover art does it justice. No fantasy would be complete without fierce battles and a sexy heroin and Hoffman didn't let the readers down on either of these fronts. I am eagerly awaiting Book Two of the Soulstealer War

Published by Thriftbooks.com User , 15 years ago
Hoffman weaves an epic fantasy tale from the unusual eye of a practical survivalist who cannot resist contemplating the nature of existence and the possibility of true magic. Scientific theory and religious dogma are subtly invited to meet on common ground as the main character, Kenneth McNary, seeks to understand true magic. He is the reluctant wizard, dependent on magic to dispel the bleak preconceptions burdening mere humans in a mythic world, and yet struggling vainly to escape his doomed fate. Power comes with a price, a price that may always be too high for humanity in its current incarnation. Recommended.
Trustpilot
Copyright © 2022 Thriftbooks.com Terms of Use | Privacy Policy | Do Not Sell My Personal Information | Cookie Preferences | Accessibility Statement
ThriftBooks® and the ThriftBooks® logo are registered trademarks of Thrift Books Global, LLC