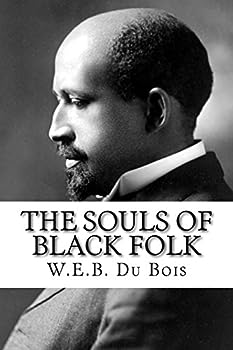 The Souls of Black Folk

Published by Thriftbooks.com User , 13 years ago
This work, written in the first decade of the twentieth century, is activist, spiritual, educational (on the history of African American life from the time of its publication back to the Civil War), anthropological, and poetic. "The Souls of Black Folk" should be in anthropological curriculums throughout the country, right alongside Margaret Mead's "Coming of Age in Samoa." For me, it showed, firstly, how slowly progress in the quality of life for African Americans had been since the Emancipation Proclamation up to 1903, and then, how slowly it has been in coming since the publication of this book to the present. We still have today a racial inequity on a scale that I, personally, am guessing will seem as barbaric in 100 years, just as the Jim Crow laws of the past seem barbaric to us now. DuBois was the first African American to receive a Ph.D. from Harvard and is credited as being one of the two leaders of the Harlem Renaissaince, Alain Locke being the other. I think this is one of the most important books on American culture that I know of, as well as an excellent document on the details of African American life, particularly in the years preceeding the works' completion.

Published by Thriftbooks.com User , 15 years ago
This was required reading for a graduate course in the Humanities. William Edward Burghardt Du Bois (February 23, 1868 - August 27, 1963) was an American civil rights activist, leader, Pan-Africanist, sociologist, educator, historian, writer, editor, poet, and scholar. He became a naturalized citizen of Ghana in 1963 at the age of 95. David Levering Lewis, a biographer, wrote, "In the course of his long, turbulent career, W.E.B. Du Bois attempted virtually every possible solution to the problem of twentieth-century racism--scholarship, propaganda, integration, cultural and economic separatism, politics, international communism, expatriation, third world solidarity. After graduating from Fisk University in 1888, Du Bois took a bachelor's degree cum laude from Harvard College in 1890 (Harvard having refused to recognize the equivalency of his Fisk degree), and in 1892 received a stipend to attend the University of Berlin. While a student in Berlin, he travelled extensively throughout Europe, and came of age intellectually while studying with some of the most prominent social scientists in the German capital, such as Gustav von Schmoller. In 1896, Du Bois became the first African American to receive a Ph.D. from Harvard University. After teaching at Wilberforce University in Ohio and the University of Pennsylvania, he established the department of sociology at Atlanta University (now Clark Atlanta University). "The Souls of Black Folk" is the most well-known work of African-American W.E.B. Du Bois, a writer, leader, and civil rights activist. The book, published in 1903, contains several essays on race, some of which had been previously published in Atlantic Monthly magazine. Du Bois drew from his own experiences to develop this groundbreaking work on being African-American in American society. Outside of its notable place in African-American history, The Souls of Black Folk also holds an important place in social science as one of the first works to deal with sociology. In Living Black History, (p. 96) esteemed scholar and Du Bois biographer Manning Marable makes the following observation about the book: "Few books make history and fewer still become foundational texts for the movements and struggles of an entire people. The Souls of Black Folk occupies this rare position. It helped to create the intellectual argument for the black freedom struggle in the twentieth century. Souls justified the pursuit of higher education for Negroes and thus contributed to the rise of the black middle class. By describing a global color-line, Du Bois anticipated pan-Africanism and colonial revolutions in the Third World. Moreover, this stunning critique of how 'race' is lived through the normal aspects of daily life is central to what would become known as 'whiteness studies' a century later." For Du Bois the problem of 20th century is problem of color line. Concept of double consciousness is looking thru eyes of others. Notion of authenticity wha

A seminal work and a recognized milestone

Published by Thriftbooks.com User , 17 years ago
Complete and unabridged, W.E.B. DuBois seminal 1903 publication, The Souls Of Black Folk is now available in an audiobook format (6 cassettes, 9 hours). This little book did more to shape the consciousness of African--Americans than any other and after a century, continues to hold the status of being a major work of both American literature. Superbly narrated by Warren Hazlittl and enhanced with a piano accompaniment by Jim Popoulous, The Souls Of Black Folk remains a seminal work and a recognized milestone with respect to the long and continuing struggle for racial equality and African-American dignity.

Published by Thriftbooks.com User , 22 years ago
If you are unaquainted with this book or with this author, you should remedy the situation immediately. In terms of eloquence, clear and ringing prose, descriptive power and any other quality that seperates great writers from mediocre ones, Dubois stands in the first rank. If Afro-Americans had had access to this book on a mass scale, there would have been a third real revolution in this country (I include the Civil War, obviously). This is the voice of suffering, but also of great ideas and ironclad arguement. It is also an incitement and very much an indictment, against racial boundaries that have plagued this nation since its inception. Dubois was and is one of the most powerful voices this country has ever produced. My jaw dropped on numerous occasions when first reading this text. He conveyed better than any other author, and there have been many great ones (Baldwin, Morrison, Wright, etc.) what it means to be "seperate, but equal." He is never an apologist. He at all moments maintains the dignity of his race. I really prefer in all aspects his demaeanor to Marcus Garvey's, even though that author was a more prominent "player." For modern revisionists (like Jane Smiley)who think that "Uncle Tom's Cabin" was "great literature," I would recommend that they read this text and then decide. One voice is authentic, the other sorely disingenuous, and even, historically, counter-productive.

The Souls of Black Folk Mentions in Our Blog

Celebrating Black History Month: 14 Black Scientists Who Changed the World
Published by Beth Clark • February 20, 2019
Black history IS history, and Black History Month is a time to celebrate both contemporary and traditional black history, beginning with a nod to Dr. Carter G. Woodson, the scholar who established what we now celebrate in an effort to collect, document, and backfill all of the history that was missing because it never made it into the books. Below are 14 scientists, mathematicians, and engineers who have made significant contributions to furthering the human race for people of all color.
Read Article
Trustpilot
Copyright © 2022 Thriftbooks.com Terms of Use | Privacy Policy | Do Not Sell or Share My Personal Information | Accessibility Statement
ThriftBooks® and the ThriftBooks® logo are registered trademarks of Thrift Books Global, LLC