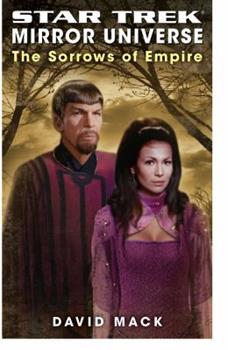 One man can shape the future...but at what cost? "In every revolution, there is one man with a vision." Captain James T. Kirk of the United Federation of Planets spoke those prophetic words to Commander Spock of the Terran Empire, hoping to inspire change. He could not have imagined the impact his counsel would have. Armed with a secret weapon of terrifying power and a vision of the alternate universe's noble Federation, Spock seizes control of the...

The Mister Spock of the Alternate Universe

Published by Thriftbooks.com User , 11 years ago
David Mack's story, "Star Trek Mirror Universe: The Sorrows of Empire" was included in another Star Trek Mirror Universe anthology. When the incidents that took place in the Classic Episode, "Mirror, Mirror" occurred, it appeared that the Alternate Mr. Spock accepted the advice from the Captain Kirk of this universe. When the Alternate Captain Kirk returned to the I.S.S. Enterprise, the Alternate Spock took care of him according to the rules of the Terran Empire. I don't want to give away too many spoilers if the people reading this review has not yet read this novel. I can say, you will NOT be disappointed! I wasn't!!

this answers all the questions

Published by Thriftbooks.com User , 11 years ago
this book begains right where mirror, mirror ended. it coinsides with the the other mirror universe shows as well. every question ever asked about how the empire fell, or how spock; as great as he is, could of destroyed the empire. this book was very well writen, and has all your favorite charectors from the mirror, mirror to star trek 6. this is diffently a must read.

Be prepared to lose sleep....you won't put it down!

Published by Thriftbooks.com User , 11 years ago
Challenged by James T Kirk of the Federation to change the course of the Empire, Mirror Spock is going to do just that. He knows the Empire will collapse in two hundred years, so he carefully plans to bring about the downfall and subjugation of the Empire in just under thirty years. This might seem odd to the reader, but his reasoning is this: freedom that is given is neither appreciated nor treasured; freedom that is fought for is cherished. I thoroughly enjoyed Sorrows of Empire for several reasons. One was the characters. The story is focused on Spock, true, but the author also brought in many characters you will recognize from various episodes and movies,and not just from the original series. And, it was great fun to see Amanda, Uhura, Sulu, and McCoy as their mirror selves. As for Scotty- he loves his engines no matter the universe he's in. But, be warned: you must remember that this is NOT the characters we know from the Federation, but characters raised and living in an entirely different culture and universe. They may behave differently from what you would expect. The plot was well done, too, moving along with twists that makes the reader not want to put the book down. I think this is the sort of book that when you go back and read it again (and again) you will discover more to the story. The plan is laid out step by step, nearly year by year, so we see how it evolves over time. This was well done. The end is rather bittersweet and sets us up for the sequel. Sorrows of the Empire ranks as one of my favorite Star Trek TOS novels and I would recommend it to any Star Trek fan.

Published by Thriftbooks.com User , 11 years ago
This is a Mirror Universe book that is as good as I expected a work from David Mack to be. It has strategy, a little science, a couple of twists to keep the read good, and overall "The Sorrows of the Empire" is a good Star Trek read, and very worth the time and money. The book brings out the best in Spock, and does a very good job of meeting all the loose ends from the other MU books. It's a worthy read, and if you are an avid reader of ST books, this is a "don't miss". I am still looking forward to a mirror universe book that contains "Q", since "Q" would not necessarily change between universes. Anyhow, you'll love this book.

Published by Thriftbooks.com User , 11 years ago
As a fan of Star Treks Mirror Universe, it was definitely a no brainer for me to grab a copy of David Macks "The Sorrows of Empire". The novel centers around Commander Spock as he rises through the upper ranks of the Imperial Starfleet **general spoilers follow** Sorrows is actually an expansion on Macks original Mirror short story that appeared in the "Glass Empires" collection, and it was great to get the full length novel treatment for the original short story. The novel jumps from year to year to year, and at times this might be a little disorienting for some readers. However, Mack totally keeps you interested with the Mirror Universe political goings on as Spock rises through the ranks. Not many of the Trek authors get a "handle" on the Mirror Universe, and David Mack seems to be one of them! Many characters inhabit the pages of this book: canon and non-canon characters from the other Trek novels. It was a nice blending, giving the reader a sense of the universe and how the Mirror universe plays out over a period of years with the various officers and civilians jockeying for power, or just trying to survive. I loved the glimpse into the Starfleet cadets as they are put through their paces, and overall the novel offers a lot of little things for the Mirror fan. Marlena Moreau is brought to life in Macks novel treatement, and that's awesome. My only complaint (not really) is that a certain favorite main canon character of mine was again knocked off by way of Xenopolycithimia as he was in the original short story; I was kind of hoping Mack would keep him around in the novel treatment. Good Mirror Universe entry! And, if you are a Spock fan, go for it.
Copyright © 2020 Thriftbooks.com Terms of Use | Privacy Policy | Do Not Sell My Personal Information | Accessibility Statement
ThriftBooks® and the ThriftBooks® logo are registered trademarks of Thrift Books Global, LLC