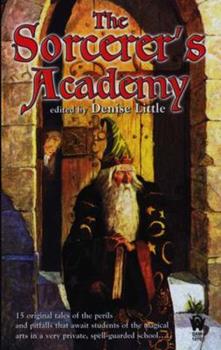 Fifteen all-new stories of sorcery about mastering the craft... From an attack by beings older than humans to an illicit charm spell gone awry to a young wizardess whose devotion to a rock star may be her undoing, these tales are sure to enchant. Stories by Josepha Sherman * Laura Resnick * P.N. Elrod * Michelle West * Rosemary Edghill * Robert Sheckley * Jody Lynn Nye* and more...

Published by Thriftbooks.com User , 18 years ago
This book may have been conceptualised as a Harry Potter spinoff, but it scores way beyond HP as far as I'm concerned. I expected completely different stories along the lines of Cat Fantastic (which would also have been nice) and was pleasantly surprised to see common characters reappearing in different stories.Like HP, the stories are set in 'the present', the heroes and heroines are in their early teens, and magic exists. Unlike HP though there seemed more exploration of teen issues and scrapes that teens could quite conceivably get into, all with a magical twist.My all-out favourite was the story by Michelle West. It seemed deeper and darker than the rest, was written almost as if in a dream, and had a satisfying ending. I was disappointed that Anna didn't appear in other stories as I would have loved to find out more about her. Most of the stories were above average (kudos to Denise Little) though I didn't like the one by Robert Sheckley so much. It seemed more run-of-the-mill in contrast, removing the students completely from the school context.

Published by Thriftbooks.com User , 18 years ago
The first reaction to a fifteen-story sorcerer's academy would be Potter lite. However, the contributors to THE SORCERER'S ACADEMY spin a series of tales intercalated by the locale and by the magic that makes a reader finish in one sitting the entire collection. The stories are fun as apprentice sorcerers and wannabe Gandolfs obtain an education in the use of the arcane powers. Fans of the Potter books will realize that this is a well-done Americanized Hogwarts School for Witchcraft and Wizardry. The reader will want to head past Phoenix to Sedona to audit Sorcery 101, remedial sorcery, and advanced sorcery courses. Attend the labs and the lectures of noted Professors like Edwards, but study hard for that final exam as even college grads will not have seen the likes of it and beware of being the teacher's pet or class clown in these environs.Harriet Klausner
Copyright © 2020 Thriftbooks.com Terms of Use | Privacy Policy | Do Not Sell My Personal Information | Accessibility Statement
ThriftBooks® and the ThriftBooks® logo are registered trademarks of Thrift Books Global, LLC