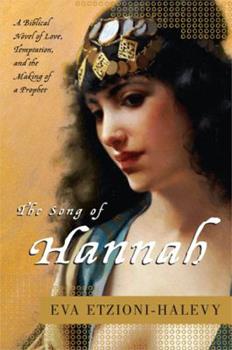 The Song of Hannah: A Novel

In the tradition of the international bestseller? The Red Tent ?comes a beautiful, sexy novel featuring Hannah, one of the most well-known and beloved heroines of the Old Testament. Hannah and Pninah, once close childhood friends, become rivals for the attention of Elkanah, the man who has married them both. Pninah, passionate and independent, easily bears Elkanah many children, but bitter that he has taken her friend as a second wife, seeks fulfillment...

An Exquisitely Sensual and Revealing Book

Published by Thriftbooks.com User , 13 years ago
"The tale of my son Samuel's birth and life has been told in a scroll that resides in the Temple, and in the scroll rooms across the Land of Israel. The people will read it now and in all the generations to come. But it contains only a small part of that which really happened." Thus begins "Hannah's Prologue"--the opening chapter of The Song of Hannah. And with that paragraph, the author drew me in, but her second paragraph cinched it. This was to be an 'all-nighter,' one of those books you just can't put down before reading just one more chapter and then another and another, and yet one more. "And so I suggested to my husband's first wife, Pninah, that we each write a book that would reveal all that could not be laid bare in the House of the Lord," Hanna continues as she draws me in even further. "By the time you read these words, we are no longer of this earth. But I hope that because of Samuel our memories live on in your hearts. So you will wish to know about him, about us, all that has been concealed so far and has been recorded in this book for the first time." Now, if that doesn't make you want to read well into the night, I don't know what does. Each chapter of this exquisitely sensual and revealing book is told by Hannah or Pninah. As children, Hannah and Pninah were best of friends. As young women, they held the distinction of being well educated in reading and writing, something almost unheard of for women of that time. Their close friendship survives the ultimate challenge... Both are wed to the same man, Elkanah. Pninah bears many children for Elkanah while, for many years, Hannah is barren. Based on Biblical facts, readers learn of Hannah's promise to give her firstborn son back to God if he blesses her with a pregnancy. Samuel, one of the great Israelite prophets, was that firstborn son. Readers also learn of "escapades" by a less than faithful Pninah and the lengths that friends will go to protect one another and their children in a society that does not leave room for women to disobey or stray. As Etzioni-Halevy tells the story of Pninah and Hannah, she also sheds light on the Israeli culture of the day, the religious ceremonies of the Jewish faith, the war between the Philistines and the Israelites, and how that war tore families apart. Above all, we are reminded that no matter how many hundreds of years ago these remarkable women lived, they experienced some of the same trials and tribulations, joys and blessings that women have universally shared since the beginning of time. No doubt, readers will see a bit of themselves in Hannah or Pninah or both women. Women's issues and female friendships are timeless treasures, and Etzioni-Halevy reminds us of this time and time again as she shares The Song of Hannah. by Lee Ambrose for Story Circle Book Reviews reviewing books by, for, and about women

Published by Thriftbooks.com User , 15 years ago
Run, dont walk to buy this new book, The Song of Hanna, by Eva Etzioni-Halevy. I started the book Three nights ago and finished it last night (I'm a speed reader). It's a story about love, romance, friendship, betrayal and redemption and it's told through the eyes of women. Hanna was the mother of Samuel, one of the great judges/prophets of Israel. Although this is a novel, it's based on facts. The story Eva has woven reads like a Harlequin romance novel mixed with scriptural type writing of the books like the Song of Solomon, the love stories of Abraham and Sarah, of Jacob and Rachel, David and Bathsheba etc. It's not hard to imagine that indeed this is how the story truly unfolded (or as we say the rest of the story, as so little is given in the Bible). It's not expensive and I believe it's an important book for any Jewish home, as it also relates the struggles of Jewish women within a male dominated society. Once you read it, pass the word around. We need more books like this for Jewish women, for any women, so that we may become empowered to take our rightful place next to our partners and to truly bring about the love relationship The Almighty meant for couples from the beginning of time. Best wishes from Israel Keilah

A book where entertainment, religion and feminism meet.

Published by Thriftbooks.com User , 15 years ago
After writing fourteen academic books and publishing numerous articles, Eva Etzioni-Halevy has written her first splendid, lusty novel that is based on a biblical tale and her own imagination. According to Eva Etzioni-Halevy, the inspiration of The Song of Hannah emanated while she was attending services in her synagogue. As she listened intently to the biblical tale of Hannah, Pninah and Elkanah, she became greatly troubled. If you remember your Old Testament, Elkanah had two wives, Hannah and Pninah. Unfortunately, Hannah, during her early days of marriage to Elkanah, could not conceive a child, whereas Pninah had several, however, Elkanah favoured Hannah. It should be noted that eventually Hannah, after promising God that if he permits her to bear a son she will give that son back to Him as a Nazarite. Hannah is rewarded with the son she craved for, Samuel, who ultimately became a renowned prophet and leader of Israel. (The Hebrews gave the name Nazarite to a person set apart and especially consecrated to the Lord). It was difficult for Eva Etzioni-Halevy to reconcile how the Scriptures show a great deal of compassion for Hanna, the barren woman, yet no empathy for Pninah, the unloved one. In fact, the name Hannah in Hebrew means grace or favour and in the bible she is represented as saintly and aggrieved. On the other hand, the beautiful shepherdess and scribe Pninah, is depicted as being the jealous one, constantly taunting Hannah. How could this unloved one, who must have been deeply pained, not be permitted to give voice or tears to her anguish? It is this sense of unfairness and intolerance that our author identifies with, thus prompting her to take up her cause in her novel The Song of Hannah. Etzioni-Halevy poignantly reflects time and place in the eleventh century B.C when Israel was a polygamous society, as she weaves a twisting and meandering plot following the intricate inter-relations of these two women and the husband they share, as well as Hannah's son Samuel. The story also interweaves the biblical tale of Samuel, who after having lived with the high priests at the Temple, becomes one of Israel's greatest prophets. He was Israel's last judge and the first priest and prophet to serve during the time of a king. It is he who visualized the ensuing wars and endeavoured to change the lives of the Israelites who were revelling in troublesome behaviour lusting for forbidden fruit and worshipping idols. We witness Pninah's devastation when her sons are obligated to enter the war with the Philistines. Arnon, her Canaanite lover, comes to the rescue and is instrumental in saving their lives. To complicate matters, when peace is restored, Samuel cannot conceal his attraction for Pninah, his father's wife. Will he let his senses take over? No doubt, it was the author's intention to turn out an enjoyable read, however, in this case we can assert that the entertainment it affords can best be described as "the sugar that makes the med

Once you start you will not put it down

Published by Thriftbooks.com User , 15 years ago
I only recently discovered Biblical fiction and it has quickly become one of my most cherished genres, I quickly soaked up Marek Halter, Rebecca Kohn and Anita Diamant. These books along with Etzioni-Halevy's undeniable contribution have helped to shed light on these ancient women, and have helped me to imagine and better honour their strength, their trials and their awesome gifts to me and, hopefully some day, my daughters. Right now I am eagerly devouring The Song of Hannah, and have to say that the humaness of Hannah and Pninah has given me joy and sorrow. I have introduced this book to my mother and my aunt and they are eager to read it too. I am thoroughly enjoying it and am only frustrated that I can't read it even faster!

A Romance Novel by Another Name

Published by Thriftbooks.com User , 16 years ago
This new novel, the first of several planned or in the works, by Eva Etzioni-Halevy is a wonderful, easy read. Although set in Biblical times, the situations facing the protagonists and antagonists in this work seem almost contemporary. The author manages to convey the erudition, wit and beauty of her characters without resorting to heavy, pedantic language and abstract concepts. The culture, customs and history of the era come alive, as do the historic figures we usually meet only in the Old Testament. Although barely finished with reading this work, this reviewer is already recommending it as a future selection for her Hadassah chapter book club. If we are lucky,we may be able to discuss the work with the author herself, who plans a US promotional tour this fall. Happy reading!
Copyright © 2020 Thriftbooks.com Terms of Use | Privacy Policy | Do Not Sell My Personal Information | Accessibility Statement
ThriftBooks® and the ThriftBooks® logo are registered trademarks of Thrift Books Global, LLC