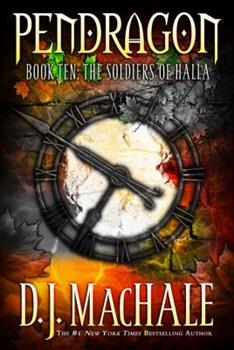 The Soldiers of Halla, 10

(Book #10 in the Pendragon Series)

Nine bestselling books. Nine treacherous territories. They have all been leading to this. Every victory. Every loss. The thrills and disappointments; the hope and despair. Every moment of Bobby Pendragon's heart-pounding journey through time and space has brought him to this epic showdown. He and his fellow Travelers must join forces for one last desperate battle against Saint Dane. Every question is answered. Every truth is revealed. And at stake...

Published by Thriftbooks.com User , 12 years ago
If you enjoy the Pendragon series, then this final book is a must read. I enjoy every single book of the series. This final book ties everything together. I love it.

Published by Thriftbooks.com User , 12 years ago
Indeed, this is the last book to the ten book Pendragon series by D.J. MacHale. For those of you who have read the previous stories, I believe you will not be disappointed. For all others, do not skip the adventure! This is a very confusing world if you jump in at the wrong time. Read the others first!! If your debating between buying or borrowing this book, defiantly buy it. You'll be glad to have it and look back. So, in all, a terrific book. Twists, turns, the unexpected (as always:), surprises, and conclusion. Everything is completed and everything comes together, like any good book ending, but there's still enough room for your own imagination. Enjoy!

Published by Thriftbooks.com User , 12 years ago
No need to go into all the details, but this book had everything. The explanation of where Press and Bobby and the travelers come from was sound and believable enough. The return of favorite characters was a plus and the whole setup and conclusion were clever and I know it had to be hard to try and wrap up this series, explain everything and make the book where even those who had never read Pendragon could follow. Critics want only what they want and who cares about that. Books can't be all things to all people, but this one comes close. I have loved this series from the beginning and I hope DJ MacHale writes another series at some point. So far he is 2 for 2 in my book--I also liked Encyclopedia Brown when I was a child. Fantastic ending. Very satisfying. The suspense at the end makes the whole book. I highly recommend this book and by all means the whole series if you haven't read the others. ******************************SPOILER************************** Spoiler If you have read the book and hate the epilogue, read it again and consider Bobby could have been void of his memories until the journals are once again in his hand, thus his wish is granted at the end of the book.

Published by Thriftbooks.com User , 12 years ago
"Here is the final book in the Pendragon series: The Soldiers of Halla. Author D. J. MacHale goes to great effort to explain all the unexplained, to tie the loose ends... This book is more philosophical than any of the previous volumes. We realize that this has not been simply an adventure story, but the screenwriter MacHale has given us a saga that allows us to reflect on the essential reality of humanity: the freedom to choose good and to fight evil. All of the main characters of the earlier volumes make their reappearance here in the final fight for Halla and for the vindication of the human spirit. Perhaps this deeper story-line is what lifts the Pendragron Series beyond the realm of the television screenplay. What seemed like the story of a preadolescent thrown into an adventure beyond him (in volume 1) has become the story of the unlikely hero fostering what is most noble in the human spirit, not simply to preserve a civilization but to "save the world". On a personal note, I received this volume (like the last three volumes in the Pendragon Series) on the day it was first made public. The reading has been exciting, stimulating, entertaining, troubling... all the things that make for an engaging story. Will the Pendragon series stand the test of time? Is it too American? Time will tell. For our place and time, however, the Pendragon series is an important contribution for those who would engage the issues of our time: justice, integrity, solidarity, loyalty, the humble pursuit of truth, the need to fight for what is right (to name a few). Pendragon, from book 1 to this final book 10, is a series that I highly recommend.

Published by Thriftbooks.com User , 12 years ago
I have been infatuated with the adventures of Bobby Pendragon since I bought the first books in the series and read them to my son back in 2005. Even after my son decided he was too old to read YA books, I continued buying every one of them as soon as they came out, and devouring them all by myself. I don't know exactly why I love these books. I love the characters and I love the complexity of the story. Each book is a complete adventure and stands on its own. But at the same time each book advances a story arch, bigger in scope than any of the individual stories. You could say each book is a block, together they build a castle. I found the "castle", the complete picture of Halla that emerges in this tenth volume quite satisfying. I totally bought into the premise of Halla and Solara and of Saint Dane's origin and self-delusion. Pendragon: The Soldiers of Halla works well as an independent book too. In the year that took for this final volume to be published, my recollection of many of the events in the previous ones was sketchy at best. Yet, I never got lost. D.J. MacHale does a great job bringing the reader up to speed, giving the information needed to follow the story in a timely, not intruding way. He also provides the right balance between fast-paced adventure and metaphysical explanations. Thus my five stars. SPOILERS ALERT Only once I lost my suspension of disbelief and that was when several thousands of people disappeared suddenly from Black Water. I don't mean through the flume. I get that. I mean, how could Pendragon miss their leaving? My other complain, and this one is huge, is that I hate, really hate, the Epilogue. Yes, I wanted Bobby and Courtney to end up together, but not like that. Not in Second Earth, because you see, according to the story, Second Earth changed from the moment Bobby became a traveler at age 14. Which means Bobby, Mark and Courtney's lives in Second Earth could never have continued as it is described in the epilogue. And what about Bobby's parents and sister are they allowed to go back to Earth too? The spirits of Solara, we have been told repeatedly in this last book, do not change the real world. So where does this "fake" Second Earth come from? So D.J. MacHale, if you ever read this, please, please, cut this epilogue in future editions. If you want to give Bobby and Courtney a future together why not let Bobby live his human life on Third Earth after the battle has been won? It would make much more sense and they would be themselves. Because, you see, the characters we have grown to love are not the two kids we met in the first book, but the people they have become because of their struggle to save Halla and their confrontation with Saint Dane. Without their memories of these events, they are as good as dead.
Copyright © 2020 Thriftbooks.com Terms of Use | Privacy Policy | Do Not Sell My Personal Information | Accessibility Statement
ThriftBooks® and the ThriftBooks® logo are registered trademarks of Thrift Books Global, LLC