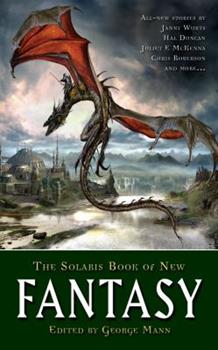 The Solaris Book of New Fantasy

(Book #1 in the Solaris Book of New Fantasy Series)

A collection of original stories from some of the best-loved names and hottest new talents in a wide range of fantasy genres, including new fiction from Janny Wurts, Scott Lynch, Hal Duncan, Juliet E. McKenna, Chris Roberson, Mark Chadbourn and Jeff Vandermeer.

Published by Thriftbooks.com User , 14 years ago
Mann's collection is a follow-up to last year's New Science Fiction collection from Solaris, and like that book, the fantasy collection provides a good overview of what's happening in the field today. Several of the stories are good, with a few exceptional pieces, especially Lucius Shepard's "Chinandega", which brought to mind Marquez's "Innocent Erendira", and Scott Thomas's "Lt. Privet's Love Song", which I went into suspecting an Eliot allusion, but which pleasantly surprised me with its unique and lightly written world (I say "lightly" not to mean "slight," but to indicate Thomas's deft hand in presenting a world just different enough from ours to still be familiar, without hitting his readers over the head with the fantastic). Several of the stories read either as chapters from a longer piece (Janny Wurts' "Reins of Destiny"), or continue a series with familiar characters (Mike Resnick's "Shell Game", which is another in the Mallory supernatural detective stories). This can be a bit off-putting to someone who isn't up-to-date on the current trends in fantasy, but that said, it works as a good introduction to those very trends, and a foot in the door to discovering new authors and series the fantasy reader might want to explore. The collection runs the gamut from straight swords and sorcery, through slipstream to an almost purely stream-of-consciousness experiment in Hal Duncan's "The Prince of End Times". Does it work? For this reader, yes. The key is to accept that fantasy in the 21st century isn't your father's fantasy anymore, although there will always be room for a touch of Howard-esque tales (Juliet E. McKenna's "The Wizard's Coming") mixed in with modern urban fantasy such as Conrad Williams' "O Caritas", which reads as a psychologically darker vision of Gaiman's London as seen in "Neverwhere". Overall, I unreservedly recommend this anthology.

Excellent Overview of the Fantasy Field

Published by Thriftbooks.com User , 14 years ago
I am very impressed with this anthology. I liked 13 out of 16 stories - which is as good a number as I ever get from an anthology. What's more - I understood and applauded the reason for the inclusion of the three I wasn't wowed by. What George has done, and what makes this anthology so useful to me personally, is to take a very comprehensive, catholic view of the fantasy field. Rather than produce a book entirely composed of traditional fantasy or entirely composed of literary/slipstream fantasy, he's put out an anthology showcasing a broad range of fantasy offerings. As such, this makes the anthology a wonderful overview of the current state of the field (perhaps even a more accurate one than a Year's Best collection might present, with its understandable slant towards literary works) - and a whole lot easier for this busy editor to read than trying to sample a score of tome-sized fantasy novels would be. Looking at the TOC, I really liked 11 of the stories quite a lot, enjoyed 2 more, and, as I said, appreciated the inclusion of the three I didn't like for the education in what's out there they've afforded me. Stand out stories in my opinion are: Mark Chadbourn's "Who Slays the Gyant, Wounds the Beast," Jeff Vandermeer's "King Tales," Christopher Barzak's "In Between Dreams," Mike Resnick's "Shell Game," Jay Lake's, "A Man Falls," Scott Thomas' "Lt. Privet's Love Song," and Lucius Shepherd's "Chinandega." Yes, that's a lot of stand out stories. And the others are close behind. I liked the book that much. And I'm very glad to see it doing well, as it's made my yearly required reading list.

Published by Thriftbooks.com User , 14 years ago
Within this cover are sixteen stories by sixteen Solaris Fantasy authors. Yes, SIXTEEN! You will not be able to simply pick up this book and read it in one sitting. As I began each story, I never knew what magical realm I was stepping into. Readers need to have an open mind with each and every tale. There are stories set in what looks to be our present day on Earth, yet sorcery is normal. (They even have special prisons for the insane ones.) There are stories with fae folk, with dragons at the top of the food chain and humans are like bugs, and some stories are too wild for me to even begin to describe **** Like all anthologies, some stories are boring (to me), some are good, and some are just fantastic. I wrote down a few author names to keep an eye out for their future titles, if any. There is no doubt in my mind that any fantasy fan will enjoy this thick novel. If you read this review before the December holidays, I recommend this book as a present for anyone you know that enjoys stories that outside the normal box. **** Reviewed by Detra Fitch of Huntress Reviews.
Copyright © 2022 Thriftbooks.com Terms of Use | Privacy Policy | Do Not Sell My Personal Information | Accessibility Statement
ThriftBooks® and the ThriftBooks® logo are registered trademarks of Thrift Books Global, LLC