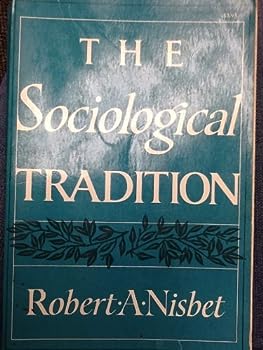 by Robert A. Nisbet

When first published, The Sociological Tradition had a profound and positive impact on sociology, providing a rich sense of intellectual background to a relatively new discipline in America. Robert... This description may be from another edition of this product.

sociology minus the marxism

Published by Thriftbooks.com User , 13 years ago
Ever want a solid and scholarly introduction to sociology, but have been turned off by the marxist tenor, and knee jerk leftism of all the sociology profs that were on your college campus? let alone the majors? this book is fantastic. it follows the five main currents of "golden age" sociology- community, authority, status, the sacred, and alienation. he pays special attention to Tocqueville, Marx, Weber, Durkheim and Simmel. Mostly he uses Marx just to kick him around- which is great. or he uses Marx to point out how particularly dumb Rousseau was. Double great. if you want access to the tool box of sociology, but from an honest academic with a conservative view of the field, pick up this book.

Published by Thriftbooks.com User , 20 years ago
In THE SOCIOLOGICAL TRADITION, Robert Nisbet describes what he considers the "golden age" of sociology, the period of 1830-1900. As Nisbet tells it, the Enlightenment wasn't much concerned with sociological themes. Contract and reason, not community and tradition were central. However, the excesses of the French Revolution and the reaction to it, gave birth to a number of searching critiques. Some of the most important were done by conservatives such as as Burke, Tocqueville, Maistre and Bonald. Following these thinkers were scholars such as Le Play, Durkheim, Tonnies and Weber. Although not all were "conservatives" in the more traditional sense of the term, their thought was imbued with a sort of conservatism and anti-individualism. In fact, August Comte, widely considered the founder of sociology and the man who first used the term (as well as the term "positivism"), had nothing but contempt for the philosophes in spite of the radical nature of much of his thought.The organization of this work is unique. Rather than discussing this period in from the perceptive of its leading thinkers or schools, Nisbet describes the major themes of sociology: community, authority, status, the sacred, and alienation. Nisbet calls these the "unit-ideas" of sociology. Although this is a novel way to organize a book, Nisbet's approach helps the reader see the similarities and differences in the various thinkers.One of the best aspects of this book is Nisbet's often lengthy quotes from the key thinkers. I would say a good 15 percent, if not more of the book, is taken up with such quotes. Although this might be a bit unusual for a scholarly work, it is very helpful to the reader who (like myself) has minimal knowledge of the thinkers involved. This edition also contains a new introduction by Nisbet in which he surveys the reviews of the work.

One of the true giants of American social thought

Published by Thriftbooks.com User , 22 years ago
Nisbet's book (or virtually anything else he wrote) should be required reading for undergraduates taking introductory sociology courses, as he corrects much of the misguided politically correct nonsense which today calls itself 'sociology.' This is a deeply historically informed, intellectually sophisticated while still entirely readable and accessible (even to first-year college students) account of the context w/in which the first generation of sociological thinkers developed their theories of modernity. These thinkers had a very complex, ambivalent orientation to modernity and the fruits of the two revolutions (French and Industrial), and this is evident in the profundity and continued utility of their work. There was a time, not long ago, when the discipline of sociology produced a significant number of thinkers like Nisbet, who fully understood the intellectual history w/in which they were situated and were classically well-read. Sadly, that time seems gone now, and undergraduates have few Nisbets left to defend them (and honest intellectual inquiry) from the multitudes of ranting and ill-informed ideologues who want not to teach them, but only to convert them to the latest political crusade (be it Marxism, radical feminism, racial identity politics, queer activism, or some other, newer brand of radical politics masquerading as scholarship).

A clear and insightful book.

Published by Thriftbooks.com User , 24 years ago
This book is an excellent introduction to the development of the sociological tradition and is also recommended reading for anyone interested in nineteenth-century intellectual history. Nisbet's book would be an excellent complement to H. Stuart Hughes' CONCIOUSNESS AND SOCIETY and Raymond Williams' CULTURE AND SOCIETY: 1780-1950. Nisbet's book clarifies key concepts of nineteenth-century social thought without assuming (as Hughes does) that the reader is already fully versed in the works of the thinkers he examines.
Trustpilot
Copyright © 2022 Thriftbooks.com Terms of Use | Privacy Policy | Do Not Sell or Share My Personal Information | Accessibility Statement
ThriftBooks® and the ThriftBooks® logo are registered trademarks of Thrift Books Global, LLC