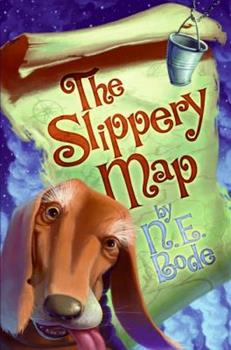 If you've ever whiled away an afternoon dreaming of another world, then you know that place is real. Oyster R. Motel has dreamed of another world for almost his whole life. (But that's only understandable--he's been raised in a nunnery. Do you think nuns approve of swinging from the belfry? Of raising tadpoles in the holy water? Of playing the organ at all hours? They do not.) Oyster didn't even know that imaginations could be mapped; he barely knew...

Published by Thriftbooks.com User , 13 years ago
This is my 9 year old daughter's favorite book (and she reads everything she can get her hands on!) It is intriguing and suspenseful and, even better, no one dies! The Harry Potter series is a little to scary for her liking so this book is perfect!

A charming and creative tale of love, hope and courage

Published by Thriftbooks.com User , 13 years ago
As an infant, Oyster R. Motel was dropped off at the gate of a nunnery in Baltimore, Maryland, wrapped in a towel from the Royal Motel and placed in a Dorsey's Pickled Foods box. Oyster was discovered by the nun he calls Sister Mary Many Pockets, who has the habit (excuse the pun!) of carrying around many items in the hidden pockets of her black habit. She especially likes to pull out peanuts, which she eats and then leaves a trail of shells wherever she goes. Upon his arrival at the convent, Sister Many Pockets names the orphan boy Oyster because she believes his heart is a pearl. His last name, R. Motel, comes from the Royal Motel towel in which he had been wrapped. For the past 10 years, Oyster has lived with Sister Many Pockets and 12 other nuns in a world of quiet-soled shoes and prayerful silence. He is educated by Sister Many Pockets, and the only time he has ever gone beyond the gates is to visit the doctor. In the convent, communications is done by pen and paper --- not an exciting environment for an inquisitive, growing boy. For friends, Oyster has a sickly baby bird he tucks in his bedroom closet and to which he feeds unconsecrated hosts. He also has a moth collection that he keeps in a cardboard box, covered with a mesh lid. And there's the tadpole in the holy water font. As 10-year-old boys often do, Oyster has become active and curious. His jumping pews, pumping the organ and riding the bell cord in the belfry have been the cause of much consternation, and his misbehavior has generated complaints among the nuns. More and more he wants to explore the world beyond the convent walls Outside contact is primarily with Mrs. Fishback, an unpleasant woman who arrives each morning with her overweight daschund, Leatherbelly. Mrs. Fishback cooks and run errands for the nuns. She also delights in telling bad news and dislikes children --- especially Oyster --- who she believes does not belong in a convent. The summer Oyster is 10, children begin to disappear. The media calls it the "Mysterious Temporary Disappearances," or MTDs for short. Kids vanish into objects such as hula hoops, sofa cushions and tire swings. Then, after a time, they reappear. Mrs. Fishback follows the news reports of the MTDs closely. She hopes Oyster will disappear, although not temporarily. One day, after Oyster chips a tooth, Mrs. Fishback is called upon to take him to the dentist. She, Oyster and Leatherbelly hop in the convent's van, and she "bullies her way across town," driving madly to the dentist. After she is slightly injured in an accident, which she blames on Oyster, Mrs. Fishback sends him to get help. Oyster wanders down the street and enters a store with boxes and rows of shelves filled with rolled-up scrolls. Inside, he meets a woman who tells him she is a mapkeeper for the "Imagined Other Worlds" of children. Oyster is surprised to learn that imaginations can be mapped, and is even more astonished to discover that there is a map in the store with hi
Trustpilot
Copyright © 2022 Thriftbooks.com Terms of Use | Privacy Policy | Do Not Sell My Personal Information | Accessibility Statement
ThriftBooks® and the ThriftBooks® logo are registered trademarks of Thrift Books Global, LLC