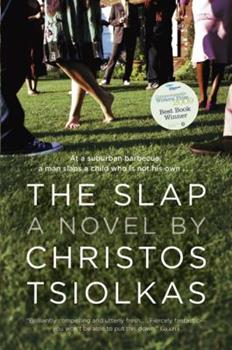 The basis for the NBC event series directed by Lisa Cholodenko and starring Uma Thurman, Peter Sarsgaard, and Zachary Quinto. In this powerful and riveting novel reminiscent of Liane Moriarty's Truly,... This description may be from another edition of this product.

A beautiful book about people

Published by Thriftbooks.com User , 12 years ago
The greatest of this book's many virtues is Mr. Tsiolkas' wonderful handling of character. These are not melodrama characters who fall neatly into good-guy/bad guy categories. Each of these characters is completely realized, and the great thing about this book is how Mr. Tsiolkas treats each character with respect and compassion, regardless of how badly he or she may behave. People are complex creatures. People hurt and people want and people need. People sometimes behave admirably and sometimes behave wretchedly. The violence, sexism, racism, and hatefulness of these characters is not their entirety. Mr. Tsoilkas wants us to see this and recognize the humanity that lies behind some of worst behavior. The slap of the title may superficially refer to the hitting of a child, but truly all the characters in this novel have been slapped in one way or another by the world around them. Some respond admirably, most not. But that is life. Thanks, Mr. Tsiolkas, for an insightful and beautiful novel.

Published by Thriftbooks.com User , 12 years ago
I am prudish by action but not by verbiage. I was not offended by the words in this novel and contrary to the opinion of some, did not in any way find them to be indicative of the author's lack of vocabulary or material. I think the words were meant to evoke strong feelings and in me, they did. Nothing raunchy, more feelings of awe and disgust, depending on the circumstance. I have deep respect for Tsolkias' imagination. I can't fathom the life he's led that drove him to imagine some of the material in this novel - Aisha's 8 previous partners for instance. I was keenly interested in every character but Connie and there were times even in her life when I found myself wanting to know more. I appreciate that the language and leanings of this novel aren't for everyone but for those not faint of heart in language, it's a fine read.

The Slap will Hit You Right in the Face

Published by Thriftbooks.com User , 12 years ago
I loved this book. The Slap is an edgy, daring, in-your-face story of some very interesting and crude characters living in and around Melbourne. The writing is forceful, almost violent in its direct intensity. The author pulls no punches. He writes about the casual depravity of ordinary people in an ordinary suburban setting. Personally, I've never met any people who are so casually degenerate in their personal lives, whether it be through casual sex, casual drug-taking, overt racism, hatred of the poor, sexist behavior, and just plain indifference to any semblance of the moral standards of not harming yourself or others. It's a little hard to discern if the author is satirizing the lives of middle-class suburban dwellers or if he is celebrating their destructive behavior. (Full disclosure, I am an American who has never been to Australia, so I can't vouch for any authenticity the book may have to actual life in Australia; although I am quite well-acquainted with middle-class suburban life in California.) Everyone in this story is messed up. That's what makes it so interesting. Hector, the main character, is narcissistic and cheating on his wife. He takes amphetamines and lies about his drug use. He doesn't even like his 10-year old son Adam, because Adam is pudgy. Aisha, the wife of Hector, is mostly okay, but she thinks of leaving Hector for another man sometimes. Rosie is an earth mother bohemian who's married to loser alcoholic Gary. They have a four-year old son, Hugo, who is still breast-feeding. Yes, it's supposed to be a repulsive situation. Hugo is the poster child for why birth control was invented. He's a spoiled, violent, vicious, out-of-control brat. When he's slapped really hard by an adult at a barbecue, you want to applaud the guy who slapped him and give him a medal. Obviously, the man who slapped Hugo is in big trouble - his name is Harry, he's wealthy, and he's the cousin of Hector and Aisha. Unfortunately, Hector and Aisha are asked to choose sides between Harry, and their friends Rosie and Gary. Most of the book revolves around the repercussions of "the slap" and its aftermath. Let's just say that nobody really wins in this story, everybody loses something. There's no "good guys", except possibly the aboriginal couple who have converted to Islam, who are the only adults in the story not abusing alcohol or other people (at least not anymore). I can see why a lot of readers would find this book offensive. There's a lot of crude behavior, a lot of drinking and depravity, and really a few too many sex scenes. Still, the powerful writing pulls the characters through, and I found myself wanting to find out "what happens next", which is a sign of good writing. Part of me wanted the main characters to "get what was coming to them". It's frustrating to read passages where the author has the character shooting up drugs, having promiscuous sex, behaving rudely; and there's no suffering or downfall to t

Published by Thriftbooks.com User , 12 years ago
Tsiolkas is a major, major presence on the Australian scene, and one of the few writers working there with a truly radical sensibility (aesthetic and political). It's a shame his earlier novels, which are much more extreme than this one, aren't available in the US. Still, The Slap offers great insight into a wide cross-section of contemporary Australian society. No doubt it is one of the most important Australian novels of the last few years.

Published by Thriftbooks.com User , 12 years ago
Synopis: It would seem that this story is about an event at a suburban backyard barbecue, a man slaps a four year old child (not his own), and the impact this event has on the people at the barbecue. However, this story is about alot more than this one event. Tsiolkas uses the slap to take a confronting look at the lives of middle class Melbournians. It is a book about parenting, love, sex, marriage and growing up - from teens to adults to the elderly. It is told from eight different viewpoints, each giving their own interpretation of the event and the fallout from it on their lives. This is brilliant. I read it so quickly, I couldn't put it down. There is so much about modern Australian life that is covered in this book that I won't even try to explain it all or this review would go on for pages. It covers almost every facet of modern life. This is seriously confronting writing, I get the feeling that Tsiolkas has so much anger towards his own and his parents' generations that he wrote this book to say 'have a good hard look at yourself!'. The characters (except for the teenagers, who Tsiolkas treats much more kindly) are what some would call 'human', I call them almost completely unlikable, obnoxious, self-centred and ignorant with very little to redeem them. I can't believe I can hold characters in such contempt and yet enjoy a book so much. This is not light reading, but is great reading. I thoroughly recommend it, though be warned, it will make you think about your own life and your own choices for days after reading it.
Trustpilot
Copyright © 2022 Thriftbooks.com Terms of Use | Privacy Policy | Do Not Sell or Share My Personal Information | Accessibility Statement
ThriftBooks® and the ThriftBooks® logo are registered trademarks of Thrift Books Global, LLC