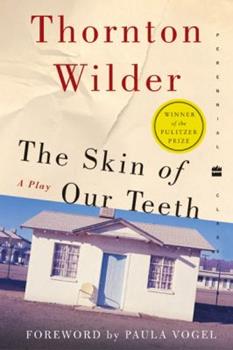 The Skin of Our Teeth

A timeless statement about human foibles...and human endurance, The Skin of Our Teeth is Thornton Wilder's brilliant, Pulitzer Prize-winning play, with an afterword by Wilder's nephew, Tappan Wilder. Time magazine called The Skin of Our Teeth "a sort of Hellzapoppin' with brains," as it broke from established theatrical conventions and walked off with the 1943 Pulitzer Prize for Best Drama. Combining farce, burlesque, and satire (among other styles),...

The Skin of Our Teeth

Published by Thriftbooks.com User , 11 years ago
I am highly pleased with this product, it arrived in time and in wonderful condition! Thanks so much!

"The end of this play isn't written yet."

Published by Thriftbooks.com User , 16 years ago
Ignoring the conventions of time, this playful "message play" follows one family from the days of the glaciers and dinosaurs to a post-apocalyptic, modern world. George Antrobus, the inventor of the wheel, and Maggie, his wife, the inventor of the apron, have two children, Gladys and Henry (whose previous name was Cain). The bossy father, domestic and subservient mother, aggressive and dangerous son, and innocent daughter interact, often humorously, onstage and are also seen through the viewpoint of Sabina, the flirtatious maid. As the play progresses through the eras, Wilder raises questions about civilization and values. George, by Act II, is convinced that the world is made for pleasure and power, but by the final act, after a world cataclysm, the family confronts what is truly important in their lives. A pet dinosaur and a wooly mammoth, the Boardwalk of New Jersey and the Miss America contest, the fraternal Order of Mammals (of which George is President), and the attempted seduction of George and his fellow Mammals by predatory women all add to the visual appeal of this production. Though the play pretends to be traditional in its dramatic structure, it takes liberties with the audience as the various actors step out of character to address the audience, as does the director. At one point Sabina refuses to play a scene, summarizing it for the audience as the director and George plead with her. First produced in 1942, the play reflects Wilder's fear that the war then engulfing the world might truly be a war for the future of civilization. His conclusion, which highlights the values of western philosophers, such as Spinoza, Aristotle, and Plato, also reflects his religious beliefs and his belief in the enduring values of (western) literature. "We've come a long way--we're learning," he says, hopefully, but he also reminds us that "the end of this play isn't written yet." Creative and original in its day, the play represents a major moment in American theater. Less innovative now, more than sixty years later, it still offers food for thought in its reminder of enduring values and its questions about what we value and would save from our own lives in a similar cataclysm. Mary Whipple
Copyright © 2020 Thriftbooks.com Terms of Use | Privacy Policy | Do Not Sell My Personal Information | Accessibility Statement
ThriftBooks® and the ThriftBooks® logo are registered trademarks of Thrift Books Global, LLC