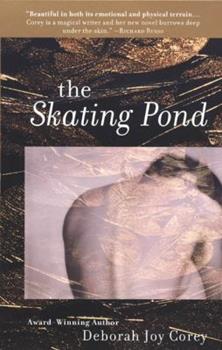 In the summer, tourists come in droves to the pond in the tiny coastal town of Stonington, Maine, to see the early-morning lilies in bloom. But in the winter, the pond belongs to the locals-especially to a beautiful figure skater named Doreen Johnson, and to the boys who play hockey. It is at this pond that a tragedy occurs-a devastating accident that will thrust one teenage girl into a harsh adulthood as she struggles to come to terms with the painful...

Published by Thriftbooks.com User , 18 years ago
The metaphors in this novel are truly uncountable - but every one is aptly drawn. Combine that with a cast of characters that are so compelling and real, involved in a story with which any reader should be able to relate, and there are plenty of reasons why this novel should be widely read and lauded. The quote on the book from Elizabeth Hardwick, characterizing THE SKATING POND as `a love story' might lead some potential readers to write it off as romantic fluff - to do so would be to do this novel a great injustice. This is simply incredible writing.Corey's main character, Elizabeth, is thrust into adulthood at an early age through a double tragedy - the death of her mother and subsequent abandonment by her father. Over the course of twelve years, we see Elizabeth go through the emotional ups and downs that would easily fill most people's lifetimes. Through it all - through her yearnings for more than a life in a remote Maine coastal village can offer her - she remains questioning. She questions the life led by those around her, and she questions herself - what does she really want out of life; what can she expect from it; what does she know of love, and what does she want from it? These are things that each of us must work out for ourselves, in our own way - and Corey's lovely writing allows us inside Elizabeth's mind and heart as she walks (and sometimes stumbles, as do we all) through life.Corey has a way of revealing the humanity and goodness that resides (I believe) in all people - even the characters in her story that are somewhat less than likable come across sympathetically, at least in some ways. The life-lessons that her central character absorbs here are never presented as set-in-stone or rigid - as another reviewed astutely pointed out, it's all about the choices we make. Those are the ones we have to live with.I wonder if Corey set out to write such an ambitious novel, or if it `just happened' to turn out that way. Whatever her original intentions, she has written an absorbing, rewarding and entertaining novel - highly recommended.

Do Yourself a favor and read this book!!

Published by Thriftbooks.com User , 18 years ago
I don't know where this little gem of a book was hiding, but I certainly am glad that I found it. I was immediately drawn to the main character, Elizabeth and found myself rooting for her in her desire for a family life and then later on through her trials with love and loss. To me this book is about the choices we make and how everything that happens to us leaves it's mark on us somehow.

Published by Thriftbooks.com User , 18 years ago
Copyright © 2003 by Diana GuerreroThe Skating Pond is full of breathtaking prose. The rich imagery and descriptions were a delight. Once hooked, I didn't put up much of a fight and followed Elizabeth's journey from adolescence through motherhood surviving challenges and memories. I devoured this novel and will definitely put Ms. Corey on my list of authors to watch.

Published by Thriftbooks.com User , 18 years ago
THE SKATING POND by Deborah Joy Corey is a story written to the emotions and soul of the reader. It works its way into your mind, and haunts you with its meanings and consequences. By writing this story in first person, Ms Corey allows the reader to fully experience the happenings and people in the life of the main character, Elizabeth. These things are felt and viewed by Elizabeth in the presentation of the story, but the judgments about these things are left up to the reader. After looking for love in all the 'right' places, Elizabeth finds only pain, disquiet, and abandonment - she then turns to a place where she receives great passion and greater pain. Eventually, Elizabeth makes choices, grapples with her emptiness and past, and finds a love that gives her the option of a life of sweetness and joy----if she has not waited too late for this to become her life long reality.Skating, and memories of her mother, take Elizabeth on a journey of great intensity for the reader. Deborah Joy Corey writes with such a fluidity of function and style that even the most mundane story line could become a masterpiece. Though in reality, it's the greatness of what Ms Corey has chosen to write about that completes the superiority of this book. Somewhere in the middle of this book, one of the characters makes a profound statement concerning tragedy and choices: saying that the person has a CHOICE to make when tragedy happens--be destroyed, or be glued together. So many books of dysfunction and disillusionment seem to leave each person to some unknown "fate". Ms. Corey gives the reader an opportunity to experience personal responsibility and choices within a fictional world in this beautifully written story that can be enjoyed again and again.
Copyright © 2020 Thriftbooks.com Terms of Use | Privacy Policy | Do Not Sell My Personal Information | Accessibility Statement
ThriftBooks® and the ThriftBooks® logo are registered trademarks of Thrift Books Global, LLC