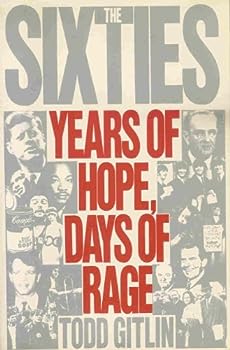 The Sixties: Years of Hope, Days of Rage

Say "the Sixties" and the images start??coming, images of a time when all authority was??defied and millions of young Americans thought they??could change the world--either through music,??drugs, and universal love or by "putting their??bodies on the line" against injustice and??war. Todd Gitlin, the highly regarded??writer, media critic, and professor of sociology at??the University of California, Berkeley, has written??an authoritative and compelling...

I was hoping for an overview of the decade, not an autobiography of the author during the 60's. I wi

A memoir from a 60's revolutionary

Published by Thriftbooks.com User , 14 years ago
This was required reading for a graduate course in American history. Todd Gitlin's "The Sixties: Years of Hope and Days of Rage" is Gitlin's first hand account of the revolutionary air surround the 1960's. Gitlin was the president of the Students for a Democratic Society (SDS) until 1969. Through his book Gitlin is able to describe the feelings of social unrest and dissatisfaction among baby boomers during the 1960's. Gitlin recounts the inner workings of the SDS organization and the political infighting and offshoots which developed as some members became more radical and others became more conservative. Gitlin's title, "Years of Hope and Days of Rage" exemplify the feelings of America's college students and generation of young adults during the 1960's. Gitlin describes the 1950's as a drab and unremarkable time when Americans were content to be materialistic and conformist. Although there were some poets, musicians, writers, and philosophers who were making headway towards social rebellion, in Gitlin's opinion, the 1950's were characterized by America's "genial deadhead" president Dwight Eisenhower. Gitlin describes some of the inspirational figures and their contributions which began in the 1950's. He attributes much of the intellectual beginnings of rebellion to the "Beat" culture of the 1950's. Inspirational figures like James Dean and Marlon Brando in teen dramas like "Rebel Without a Cause" exemplified dissatisfied youth in the post World War II era. Jack Kerouac's poetry challenged the politics of the Cold War and made appeals for civil rights for Affican Americans. Rock n' Roll music with its African American beats and became a way for youth to rebel against their parents. An interesting insight which Gitlin contributes is the invention of MAD magazine and its contribution to the counterculture of the late 1960's Gitlin describes how MAD was one of the few publications which lampooned both mainstream culture and counterculture. In a time when people were scared by anything which was deemed to be unproductive to society or subversive, MAD magazine provided a sense of humor to the Gitlin describes his interest in politics had begun with his first year as a Harvard undergraduate, the Cuban Missile Crisis was the spark which began many of the first college campus demonstrations. Gitlin and other "New Left" students were aghast at the idea of nuclear war being waged over Cuba. They believed that the Kennedy administration had pushed the Soviets too far towards nuclear war and that Kennedy should take a softer approach towards U.S.-Soviet relations. Unwilling to engage in nuclear war at any cost, "New Left" activists were determined to change America's political and social landscape. Students of the New Left believed that America was too materialistic, racist, and militaristic and did not follow the principle of free speech. Gitlin describes that the New Left activists were disenfranchised by the "old liberals" and new dealers who did not h

Published by Thriftbooks.com User , 15 years ago
THE 1960's in some respects was a decade like any other: a fixed span of time filled with otherwise disparate events. But ''The Sixties'' also came to mean something more: a style, a mood, a spirit of youthful rebelliousness with its own marketable aura of excess, adventure and innocent, shoot-for-the-moon idealism. Once that spirit was spent, as Todd Gitlin writes in ''The Sixties,'' a compelling new firsthand account of the era, the decade quickly ''receded into haze and myth,'' leaving behind only a few ''lingering images of nobility and violence,'' of charismatic martyrs and mobs in the street, ''a collage of fragments scooped together as if a whole decade took place in an instant.'' Today when pundits debate a possible resurrection of the 60's, they usually have in mind a superficially similar pastiche of trends, from paisleyed fashion and renewed evidence of dissent on campus to well-publicized displays of political conscience by popular rock stars. Mr. Gitlin's ambitious effort to cut through the nostalgia and myth surrounding the 60's takes an unusual form. Working, as he puts it, ''at the edge of history and autobiography,'' he has written a wide-ranging narrative that oscillates between the first and third person, incorporating both new research on key episodes and potted histories of folk-rock music, hippies, the origins of the women's movement and so forth. What is important in the book - and what makes it required reading for anyone who wants to grasp the youthful spirit of the time - is the author's highly personal chronicle of the rise and violent collapse of the New Left. Without false sentimentality, he re-creates the political odyssey of the radicals of his generation, as well as his own role in that odyssey.

Published by Thriftbooks.com User , 20 years ago
A rare constellation of virtues made it hard to put down this riveting volume. First of all, Gitlin is a superb writer. His language often reaches a literary quality, he has a novelist's eye for detail, an investigative journalist's command of the relevant information, and a story-teller's ability with narrative. That Gitlin is an academic sociologist shows through in his capable analyses of social forces. His description of the dynamics of escalation in the student movement's activities together with its own self-understanding is especially enlightening. His account is also impressively fair-minded. Because he cared so much about achieving the goals of the student movement, Gitlin describes what was thought and done both sympathetically and critically. These and other reasons make the book well worth reading for anyone interested in U.S. culture. But for those of us who were involved in the campus struggles against the war in Nicaragua or against investment in apartheid South Africa in the '80's or, indeed, in any such campaigns since, this book creates a debt of gratitude.

Published by Thriftbooks.com User , 22 years ago
While clearly seated in a european-intellectual tradition -- i.e. para-Marxism/Postmodenism -- Gitlin's account of the events and people of the path that took the Christain/liberal movements of the late 1950s/early 1960s towards the chaos and violence of 1968 and the early 1970s is breath-taking and powerful.

A magical return to my youth

Published by Thriftbooks.com User , 25 years ago
Mr. Gitlin's position as head of SDS in the 60's puts him in a unique position to write a cultural history of those turbulent times. As a college student in the late Sixties, reading this text took me back to the days of protests, love-ins and the best music ever recorded. Quite simply I found it a moving, magical, refreshing experience.
Copyright © 2022 Thriftbooks.com Terms of Use | Privacy Policy | Do Not Sell My Personal Information | Accessibility Statement
ThriftBooks® and the ThriftBooks® logo are registered trademarks of Thrift Books Global, LLC