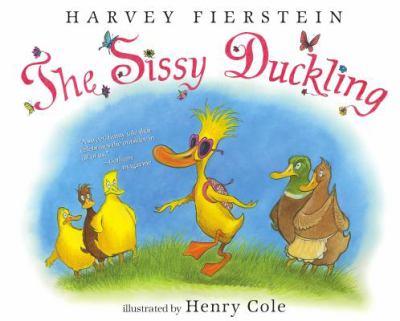 Elmer is not like the other boy ducklings. While they like to build forts, he loves to bake cakes. While they like to play baseball, he wants to put on the halftime show. Elmer is a great big sissy. But when his father is wounded by a hunter's shot, Elmer proves that the biggest sissy can also be the greatest hero. Acclaimed actor and playwright Harvey Fierstein has crafted a heartwarming story, based on his award-winning HBO animated special, about...

Published by MJ , 1 year ago
The order came promptly, but clearly not like new. There was some damage to the bottom of the cover , but more disturbingly, play-doh or some kind of yucky blue goop on the too. Very dissatisfied.

Published by Thriftbooks.com User , 17 years ago
I spotted this book in a store one day, and was enchanted. Adorable illustrations complement this simple story for children about accepting differences. While I guessed that ELmer is gay, I like how the book didn't actually say that. It described a different personality that is just different. Who cares what label goes with it, and who needs to assume? Socially, we're probably a ways off from arriving at that kind of comfort, but the harder we work to normalize it, the better. At the same time, there is nothing wrong with interpreting the story to be about sexual orientation today. The book will always be meaningful. Some people fear showing this to their children because of the "mean faces" and "mean names," but children's stories are plenty dark aleady, sometimes even more so. I think the old "Ugly Duckling" is much sadder. Depends on the kid, of course, but it's your job as a parent to guide them through a story and explain things fairly. It's both a fable and a deeper story. To the people who are barking about the "gay agenda": I feel sorry for you because you've resigned yourself to believing your ill-informed propaganda. To the people who are "closeted homophobes", who try to bury their real criticism under complaints about the word "sissy" and use the oh-so-clever, "it's okay to be gay as long as they act straight in public": you're not fooling anyone and you're not helping anything. You're totally missing the point of the book and reading into all the wrong things. Harvey Fierstein, great applause for you!

Wish I had this book when I was young

Published by Thriftbooks.com User , 18 years ago
I wish I had this book when I was growing up. I wish the people I had to deal with had this book, too. Maybe then I wouldn't have had to deal with such grief. I was a sissy, the biggest sissy at my school. I had no interest in sports (and threw a ball like a girl), enjoyed dressing up in my mother's clothes, and played with Barbie dolls. And, yes, when adolescence reared its ugly head, I realized that I was a homosexual. Concern that sissy boys will become homosexuals seems to be the main reason sissies are bullied, and told to be more masculine. But the fact is it doesn't work. People are people, and some of us are sissies, and some of the sissies, and some of the non-sissies, will grow to be homosexuals. This book acknowledges that people are different, and our differences are what makes a world. This book is must reading for sissies, as well as the parents and teachers who deal with them.

Published by Thriftbooks.com User , 18 years ago
The Sissy Duckling is a fabulous children's book. I write this glowing review not just because I am a fan of the supremely talented actor and author, Harvey Fierstein, but because the book is genuinely good. The story of Elmer, the different, special ducking is unique. It is funny and touching. Anyone who has ever had a son that was different from the other boys, a son who preferred dress-up to football, baking to Pokemon, will appreciate this book. My son does not play football or rough and tumble sports. He would rather read about knights or pirates or Napoleon. He would rather dress up as a Ninja or King than kick a soccer ball. He is not like the other boys his age --- he is more sensitive and compassionate. He is fiercly loyal and terribly creative. If you have a unique, special little guy in your life, this is the book for him. Oh, and I like to think of Elmer as Sassy - willing to fly his own course - rather than Sissy.

A soon to be teacher and a duck fan

Published by Thriftbooks.com User , 18 years ago
What a sweet book! I bought it because I love ducks and thought the title was so ingeneous. I read it and absolutely fell in love. I am an assistant teacher in a kindergarten and I am thinking about reading this to my class. There is one little boy who wears high heals and plays dress-up. I want to teach him it is okay to be different.

Published by Thriftbooks.com User , 19 years ago
"Elmer was the happiest duckling in the whole forest." But he was different from the other boy ducklings. While they boxed, built forts, and played football, Elmer baked, built sand castles and put on puppet shows. His father and the other boy ducklings called him a sissy, but his mother comforted him and tried to explain that "...sissy is a cruel way of saying that you don't do things the way others think you should." "You are special, Elmer, and being special sometimes scares those who are not." "...one day you will amaze us all." And no truer words were ever spoken. One day Elmer runs and hides from a playground fight with a bully, and later overhears his father belittling him and declaring, "He's no son of mine!" Heartbroken, Elmer runs away and makes a new home for himself in an old hollow tree deep in the forest. When disaster strikes the flock as they leave to fly south for the winter, and his father is shot by hunters, Elmer doesn't "act like a normal duck" and fly away to save himself, but stays behind, showing courage and ingenuity in the face of danger. "It may not have been what any other duck would do, but Elmer knew in his heart that it was the right thing for him to do." Harvey Fierstein has authored a sensitive story, with a positive message of acceptance, and how important it is to respect and appreciate our differences, that won't be lost on even the youngest readers. His simple and entertaining text is complemented by Henry Cole's bold, bright, and evocative illustrations, filled with eye-catching detail and marvelous facial expressions, that bring Elmer and his personality to life on the page. With its comforting and reassuring, happily-ever-after ending, The Sissy Duckling is a superb picture book that celebrates the unique and special qualities in each and every one of us. Perfect for youngsters 4-8, and best read aloud and shared, this is a wonderful, "must read" story, told with great insight, wisdom, and humor.
Trustpilot
Copyright © 2022 Thriftbooks.com Terms of Use | Privacy Policy | Do Not Sell My Personal Information | Accessibility Statement
ThriftBooks® and the ThriftBooks® logo are registered trademarks of Thrift Books Global, LLC