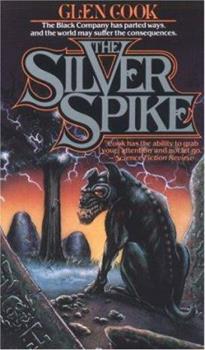 The Silver Spike: The Chronicles of the Black Company

(Part of the The Chronicles of the Black Company #diffirent short stories (#3.5) Series and The Books of the South Series)

...embedded in the trunk of the scion of the godtree, it contains the essence of the maddest of the Ten Who Were Taken...The Dominator. Defeated by the Lady and cast from this world, all that was left of him was a foul trace of lingering evil. But the graveyard that was once the Barrowland contains more secrets than dead. All who would possess the power of the Dominator are drawn to the spike. A foolhardy band of thieves is the first to reach it,...

Published by Thriftbooks.com User , 15 years ago
Glen Cook wrote The Silver Spike to resolve many of the loose ends that are left after the conclusion of The White Rose. With the final battle against the Dominator done, and the Black Company headed south to find Khatovar, there is one more story to tell. Darling, Silent, Raven, and a small handful of others are left behind to go their varied ways. Cook takes time out from the big story to make this one detour into the fate of those left behind. Raven, rejected by Darling and at loose ends, takes up with Philodendron Case and goes of wandering and settles into the life of a broken alcoholic. It is only gradually that Case pulls him together. But Raven's inability to face emotional realities handicaps him at every turn. Darling and Silent return to their underground retreat and the crazy cast of animals and vegetables that haunt the desert around them. For them, the rebellion has yet to end. And Bomanz, the wizard who set many of these events into motion, has left the Barrowland to practice being unnoticeable in the city of Oar. But things aren't as quiet as they should be. A sapling of the tree god's line guards the silver spike that holds the evil remains of the Dominator's spirit. But four desperate men decide to steal the spike and sell it to the highest bidder. And ToadKiller Dog works his own mischief, digging up Limper's head and bringing the worst of the ten who were taken. In a deadly moment the spike is freed from its prison, and all these people are drawn together for one last battle over the fate of the world. This is actually one of Cook's best stories in the series. Terse, with a lot of action and twists, it brings the first three volumes to a satisfactory conclusion. On the way it offers insights into characters that, despite their importance, never quite took center stage in the Black Company stories. These first four volumes of the Black Company series are essentially fantasy tragic-comedy and The Silver Spike is no exception, bleak and wry at the same time, with the occasional moment of hope to keep the reader alert.

An engrossing offshoot of the series

Published by Thriftbooks.com User , 18 years ago
Another great tale of the North, typically sparse but action-packed. The tenacity and malevolence of the Limper are epic. One reviewer criticized the characters as one-dimensional, but I found the characters and their swinging moral compasses compelling. I also found the ending to be one of the most inspired in any of the series. As in all the Black Company books, Cook does a very good job of establishing relative strengths and weaknesses and then developing the interplay in a gritty, realistic, and harshly practical sequence of events. Cook has the best grasp of basic human nature and the human condition of any fantasy author I have encountered.It's interesting to note in passing that the South books hint much of The Silver Spike may have been compiled by Croaker from notes brought back by Otto and Hagop, which would also help explain its style being very similar to the other books of the North.

Published by Thriftbooks.com User , 21 years ago
Silver Spike is the fourth book in a series on the the Black Company, a mercenary band in a sword and sorcery world. The Black Company is one of the great creations of modern fantasy. In a genre in which most stories are starkly black and white--really great good guys and really bad villans--the Black Company (contra its name) lives in grey. In a genre in which heroes are all-knowing and all-powerful, the Black Company is filled with fallible, vulnerable humans. Yet, they nevertheless are the baddest outfit around. Remember how we reworked Psalm 23 back in the '60s? "Yea, though I walk through the Valley of the Shadow of Death, I shall fear no evil--for I am the baddest SOB in the valley!" That could be the Black Company motto.One of the things I like best about Cook's novels is that the story line is more important than the individual characters. There are no Gandalfs here--no powerful wizards (who never seem to do anything with their power) that are all-good and all-powerful. Characters die--just like in real life. Good guys turn bad--just like in real life. Bad guys turn out to have socially redemming qualities--just like in real life.The first three novels told the story of how the Company came into the service of Lady, a sorceress of great power who rules a purportedly evil empire in the northern part of the Company's world. Eventually the Company rebels against the Lady and joins the White Rose, a reincarnated hero who opposes the empire. At the end of book three, the Rose, the Lady, and the Company join forces to defeat an older evil known as the Dominator. A long (nine-plus) series of sequels follows the subsequent adventures of the Company.In contrast, the Black Company is off the stage in Silver Spike, which follows the subsequent adventures of the Rose. The initial trilogy introduced a number of characters and plot lines that were not resolved. Here, Cook wraps up many of those loose-ends. Fans of the series will definitely want to read Silver Spike. Those who have not yet discovered the Black Company should NOt start here--you'll never get it. But I envy those folks--they get to discover the Black Company for the first time. My advice: buy this book, but pick up the first 3 Black company novels and read them first.

Published by Thriftbooks.com User , 24 years ago
This book is perhaps the perfect example of the parallel story line, as it happens between two of Cook's impeccably executed Black Company novels. I damn near died from enjoyment as I revisited Mighty Events from a totally different perspective. The story was so well matched to the mainline that it significantly strengthened the fabric of the whole. Once again, Cooks' considerable skills are used to elevate unlikely candidates to hero status, whether they like it or not. And once again, we see absolute evil (or madness, as the case may be) pitted against far less than absolute good. If you've even HEARD of the Black Company, then you absolutely must read this book. Preferably after reading the First Book of the South, to get the context right

A Black Company novel, a must read for Croaker fans

Published by Thriftbooks.com User , 24 years ago
If you haven't read any of the Back Company books, do so immediately. Don't argue with me, go find The Black Company and read it, Now! Don't start with this one though. Not that it's not a great book, it's just that you won't have a clue as to what is going on. The cover of this book should have a warning notice- Full Familiarity With The Black Company Required. If you are a fan, get ready for a great story. This is the tale of the search for The Silver Spike, the object containing the essence of the defeated Dominator. The old characters here are just like you remember them, Croaker, One-eye, Goblin and all the rest with a few new ones thrown in. Cook's ability to make you feel that you are standing just over the shoulder of his characters is a true gift. If you are a Company fan and don't buy this book, I'm going to find you and make fun of you
Copyright © 2020 Thriftbooks.com Terms of Use | Privacy Policy | Do Not Sell My Personal Information | Accessibility Statement
ThriftBooks® and the ThriftBooks® logo are registered trademarks of Thrift Books Global, LLC