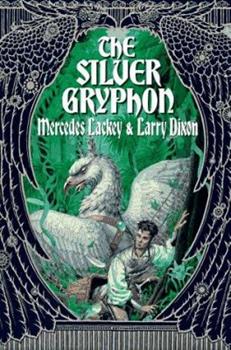 by Larry Dixon and Mercedes Lackey

A dozen years of peace have passed in the city of White Gryphon - providing well deserved and much needed security for the people who had lost their homes in the magical Cataclysm which killed the Mage Urtho, creator of the gryphons. But the inhabitants of White Gryphon have not forgotten their long struggles, and have trained an elite guard force, the Silver Gryphons, to protect their city, and if necessary, to join with the army of the Black Kings...

Different from the rest of the trilogy, but still well worth a read or two!

Published by Thriftbooks.com User , 12 years ago
Well, I did remember this one the best, but I'm surprised that I thought that I would like it the least of the three. It was VERY exciting! And, yes, I did remember quite a bit... right down to the details, but it was still a pleasure to read. I think I liked it the least when I was younger because Skandranon and Amberdrake did not feature very prominently and poor Kechara wasn't more than mentioned. Still, I thoroughly enjoyed reading it this time around.

This is one of my favorite books!

Published by Thriftbooks.com User , 21 years ago
As someone who had a lot to live up to, I could really relate to Blade and Tad's struggle to prove themselves. I loved the suspense of being stalked by an invisible enemy. It was impossible to put down! And I loved the description and innovation of what they did to survive in hostile territory. This book is more of a suspense book than an action book, but it is definitely worth more than the money it costs to buy it. Best of all, it's one of those books that you can return to every few months and enjoy all over again! This is definitely some of Mercedes Lackey's best work.

Published by Thriftbooks.com User , 22 years ago
The Silver Gryphon is a really really great book, though you should read the other two before it. (the Black Gryphon and the White Gryphon). It goes into detail about my favorite things from the mercedes lackey books...wyrsa. ::shudders:: wouldnt want to meet some of those face-to-face! e mail me..

JUST AS good as the previous two

Published by Thriftbooks.com User , 23 years ago
Many people think this falls short of Mercedes Lackey's expectations...truth is, this is one of the best of them all. The only sad part is that Amberdrake, Skan, Winterhart and Zhaneel aren't used as much as the previous two, but wait! Who's this? Tadrith, Keenath, and Silverblade all grown up? Well, who'dve guessed? Tad and Blade seem to run into a bit of a problem when they get stuck in the middle of a rain forest with the Wyr--uh, shouldn't spoil it...with evil doggish-things hunting them down.

Published by Thriftbooks.com User , 24 years ago
This was not the best of Mercedes Lackey's books, true, but it was better than most of the people have said. I think it explains some qeustions I've had about the wyrsa, like why the ones that Tylendel summoned in "Magic's Pawn" were different than the ones in the Winds series that Skif and Wintermoon (?) fought. I think that there should be a sequel to it, but that would upset the balance of her series of trilogies. ;-) The idea of magic being sucked out of something is a good one, and I think that by making Tadrith and Silverblade's stalkers have that power and also draining the magic from the surrounding area was a nice touch. I did want to see the Outpost, though . . . The descriptions are wonderful. They let me feel the exact feeling of the forest and air around me. I think that Skan captured a real parent's feeling, but I wouldn't know having never been a parent. :-
Copyright © 2020 Thriftbooks.com Terms of Use | Privacy Policy | Do Not Sell My Personal Information | Accessibility Statement
ThriftBooks® and the ThriftBooks® logo are registered trademarks of Thrift Books Global, LLC