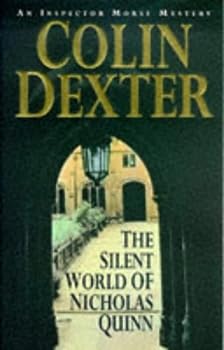 The Silent World of Nicholas Quinn

This description may be from another edition of this product. "[Morse is] the most prickly, conceited, and genuinely brilliant detective since Hercule Poirot." --The New York Times Book Review Nicholas Quinn is deaf, so he considers himself lucky to be appointed...

Outstanding from beginning to end, enhanced by the author's intimate, first-hand knowledge

Published by Thriftbooks.com User , 12 years ago
The story begins with a short Prologue describing a meeting of the "Foreign Examination Syndicate" during which the decision is made to hire the book's title character, Nicholas Quinn. "The Silent World" of the title derives from Mr. Quinn deafness. Here, Colin Dexter capitalizes on his first-hand experience and understanding of a qualifications testing organization. He was, himself, an employee of the Oxford Local Examination Board. As early as the Prologue, his intimate knowledge of Board activities and member motivation is evident. The Prologue is a self-contained mini-story, and Dexter's knowledge gives this presentation such verisimilitude that it seems more a detailed description of actual events than a fictional presentation. The book snared me from its opening questions, "Well? What do you think?" and kept my interest throughout. In between the Prologue and Epilogue, the book is divided into four main sections, each titled with a question: "Why?", When?, How?, and Who? Section chapters are frequently short, making it convenient to pause at a chapter breakpoint at almost anytime. Mr. Dexter's writing is fascinating, insightful, and often humorous. His writing never intrudes, and each section is by itself a satisfying story. The book finishes with a satisfactory conclusion to the mystery, followed by an Epilogue. Just as the Prologue brings you gently into the story, the Epilogue takes you gently out. It ties up loose ends, e.g., the impact of Morse's revelations on the people and organizations involved. Although "clues" appear through the story, it seems to me, it would be almost impossible for a reader to solve the mystery on their own, i.e., before the conclusion is finally revealed. If you do, you are clearly quite gifted. Because of the complexity of the mystery and the low likelihood of a reader anticipating the solution, the story should keep the reader's interest until the end. Dexter's subject matter knowledge, erudition, and his story telling finesse, combined with his delineation of Morse and Lewis and their interaction, made each chapter, as trite as it may sound, a joy to read. I believe Dexter's writing skills could make a trip to the supermarket interesting reading. In most mystery stories, its usually the solution's revelation that brings the greatest satisfaction. Here, each chapter is itself a treat, with the solution the treats' maraschino cherry. In conclusion, this is an exceptionally well-written story, that starts strong and stays that way to the end -- really, five stars plus.

"My weakness is guesswork. I leap to conclusions, often wrong."

Published by Thriftbooks.com User , 15 years ago
Written in 1977, this is the third of the thirteen-novel Inspector Morse series. Here Morse is not so well-developed as he becomes in later novels, when the reader of the series has more background to draw from, but he is still a fascinating character--a single man, a huge fan of crossword puzzles, a beer-lover, and a committed student of classical music, who is also crotchety, impatient with his less educated assistant (Sgt. Lewis), and unwilling to give up on a case until all the pieces fit perfectly. Here Morse and Sgt. Lewis are called to Oxford to investigate the murder of Nicholas Quinn, a profoundly deaf man who worked on the university's Examinations Board, developing the tests to determine future entrants to the university. Security breaches have occurred and copies of the test may have been sold in the Middle East. No one knows whether Nicholas Quinn was involved, and if not, who was. Most importantly, who killed him, and why? As Morse investigates the case, the private lives of the various dons and their secretary are revealed, and when Monica, the secretary, is attacked and injured, she arouses Morse's finer feelings (a "rescuing" trait of Morse which continues to develop in later novels with other "damsels in distress"). With none of the players exactly who they seem to be and questions arising as to when, exactly, Nicholas Quinn died, Morse pursues numerous dead ends and actually arrests several innocent people. Written fully ten years before some of the best of the series, this novel is fun to read as a Morse curiosity, but it is still a well-developed mystery. Morse's character is obviously still evolving--he makes a lot of mistakes which need to be corrected-- and his relationship with Sgt. Lewis is still "in process." The famed red Jaguar has not yet appeared--Morse drives a Lancia here--and his diabetes and his love of scotch whisky are still unknown to the reader. Morse is a man of integrity, however, and he is committed to finding the killer--his character and methods to be fully developed by the author in future novels. n Mary Whipple

Published by Thriftbooks.com User , 17 years ago
This is one of the great books. This book is a perfect example of what makes Dexter so great, his knack for writing great, realistic and likeable characters! Quinn's a sympathetic character; you just have to relate to him. The plot is, a bit like usual, but hey, why mess with a working formula? The books are a little cynical at times, but hey, we're not living in the days of Agatha Christie writing anymore, the world is like Dexter describes it, "like as not" Great read! I consider it one of the better Dexters (along the lines of Service of all the dead and Remorseful day) This is a gret mystery/criem books since it doesn't have the need to follow a formula, or describe VEREY detail of the Police station and the interriagtions. It's a cross between an avergae detective fiction and a great novel.

The Brilliant Morse Does it Again!

Published by Thriftbooks.com User , 22 years ago
A very well-written and enrossing story....Morse keeps us guessing until the very end. I found the characters to be interesting and complex, the dialog entertaining, and the story itself very cleverly written. Colin Dexter is a true genius.

Published by Thriftbooks.com User , 24 years ago
Another one of Colin Dexter's Inspector Morse mysteries. The main character, Inspector Morse, and his sidekick, Sergeant Lewis, tackle another murder mystery. This time of a deaf man, recently hired to work for the Foreign Examinations Board in Oxford. Everyone seems to be a suspect, but as usual Lewis' non-challant remarks and Morse's sharp mind, solve the mystery - a complex who-dunnit. I believe that this book is one of the earlier Inspector Morse mysteries, since some characteristics of Morse are not in-line with that is known so far. For example, Morse is a well educated man, with interest in classical music, Latin, history and The Times crossword puzzles. However, in one scene, Morse does not know what Darjeeling is. There are also other discrepancies: Morse drives a Lancia in this book, which I find very inappropriate, him being a snobby Enlighman. Morse's usual vintage maroon Jaguar is more in-line. Other than those little discrepancies, the book was yet another good exercise for the mind and an enjoyable read. The Oxford setting still always takes me back to those college days, when I used to roam around Oxford myself.
Copyright © 2020 Thriftbooks.com Terms of Use | Privacy Policy | Do Not Sell My Personal Information | Accessibility Statement
ThriftBooks® and the ThriftBooks® logo are registered trademarks of Thrift Books Global, LLC