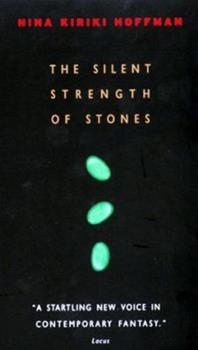 The Silent Strength of Stones

(Book #2 in the Chapel Hollow Series)

It is a season of many wonders, with many secrets ripe for discovering ...and some best left in shadow, unexplored. Summer has come to Sauterelle Lake. And inquisitive young Nick is discovering many... This description may be from another edition of this product.

Published by Thriftbooks.com User , 19 years ago
Nina Kiriki Hoffman is a new discovery for me, and one long overdue. The Silent Strength of Stones is an excellent introduction to her writing, which -- like contemporaries Charles de Lint, Emma Bull, Terri Windling, etc. -- crafts a highly developed fantasy world within the framework of a thoroughly modern, very real society. Her characters are finely drawn and wholly believable in this setting, and the story resolves neatly while still leaving ample room for a sequel. Hoffman is an exciting writer -- I can't remember the last time I found one who intrigued me this much!

This books was terrific

Published by Thriftbooks.com User , 21 years ago
This was a really great book. It sucks you in and is very hard to put down. Its just enough fantasy and magic for me. An ordinary guy in an ordinary life, and he turns out to be not so ordinary after all. I don't like the whole unicorn and dragon adventure quest type fantasy that is everywhere, and have a hard time finding ones I think I'll like. This was one of them..very different type of fantasy. I wish I knew a category to call it. I don't know what it is about her books, but I just can't get enough, I wish 'Thread that Binds..' wasn't so hard to find. I read the Red Heart of Memories, and then I was immediately hooked on her writing.

Published by Thriftbooks.com User , 22 years ago
Like the Harry Potter stories, this book is about a magical child growing up among non-magical people who eventually discovers his own heritage and powers. But the story of this boy's discovery of his true nature is much richer and darker, and much less predictable. The characters are more complex--even most of the "bad guys". The mother who abandons him and the father who mistreats him turn out to be doing the best they can in struggling with their own demons. As in "The Golden Compass", another of the few truly original fantasy novels written in recent years, not everything is spelled out. Tantalizing hints of greater mysteries and stranger worlds leave the reader craving more.I found this book to be much more satisfying and well-written than her earlier "The Thread that Binds the Bones", although I did enjoy that book too. My only criticism is that the book is much too short--it's one of the rare books that truly deserves a sequel. And the author deserves to sell at least as many books as J.K. Rowling.

Published by Thriftbooks.com User , 22 years ago
I'm a 57 year old woman who started my science fiction/fanasy reading passion in the third grade by reading all the Tarzan books I could get my hands on. The Silent Strength of Stones gave me some of the same magical feeling I get when I walk through our woods with my dogs. The only problem is - the book ended too soon - I want to know more - I want a sequel (or two or three)

Published by Thriftbooks.com User , 23 years ago
"The Silent Strength of Stones" is a wonderful book. Hoffman builds her own world that looks exactly like our own, except for those strange people with the mysterious (sometimes even to them!) powers. There's only one thing that made this a less-than-phenominal experience for me: I'd already ready "The Thread That Binds The Bones", Hoffman's first novel. "Thread" makes this book seem anemic! The two are loosely connected, since Hoffman scatters clues (names and pieces of her Ilmonish vocabulary) that Willow, Evan and their strange family are related to the main characters of "Thread". Since "Thread" is, sadly, out of print and hard to find, "The Silent Strength of Stones" will have to suffice for people new to Hoffman's work. Even a book that is, in my opinion, her second best, is still head and shoulders above the work of most other fantasy writers. This is a book that will carry you along, envelope you in its world and characters, and leave you begging for more of Ms. Hoffman brilliant writing.
Trustpilot
Copyright © 2022 Thriftbooks.com Terms of Use | Privacy Policy | Do Not Sell My Personal Information | Cookie Preferences | Accessibility Statement
ThriftBooks® and the ThriftBooks® logo are registered trademarks of Thrift Books Global, LLC