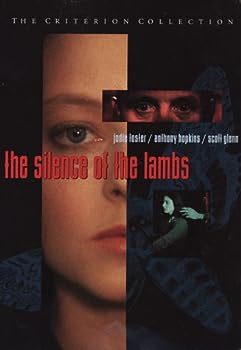 The Silence of the Lambs (Criterion Collection Spine #13)

This description may be from another edition of this product. An FBI woman needs a killer called Hannibal the Cannibal to catch a killer called Buffalo Bill. Oscars for best picture, director Jonathan Demme, actor Hopkins, actress Foster.

This classic thriller is a feast of terror and suspense!

Published by Horror crazy , 1 year ago
I love The Silence of the Lambs, which is why I would love to own it on DVD! I used to own the movie on VHS, but after several years, my VCR no longer works. It plays movies, but you can’t see the picture. I’ve seen this movie a million times, and it’s still a terrifying movie I would recommend to fans of horror movies and suspense thrillers. You know the plot if you’ve seen the movie: FBI trainee Clarice Starling is sent to interview the murderous, imprisoned Dr. Hannibal Lecter in the hopes that he can provide the vital information needed to capture serial killer Buffalo Bill before he kills the woman he has abducted, a woman named Catherine Martin. This terrifying and sometimes gory mystery is an exercise in nearly unendurable suspense and terror. Anthony Hopkins and Jodie Foster play off of one another so brilliantly, creating some of the most emotionally tense scenes ever filmed. Jonathan Demme was a fantastic choice as the director; he makes the effort to translate Thomas Harris’ chilling novel into an intense thriller look like child’s play. If you’re looking for a scary movie that delivers the goods in an extremely suspenseful way, don’t miss this classic shocker!
Copyright © 2020 Thriftbooks.com Terms of Use | Privacy Policy | Do Not Sell My Personal Information | Accessibility Statement
ThriftBooks® and the ThriftBooks® logo are registered trademarks of Thrift Books Global, LLC