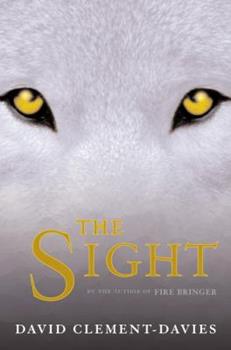 In a work of great scope and imagination, David Clement-Davies, author of the highly acclaimed Fire Bringer, takes us to the dark forests of old Transylvania and into the minds of wolves. Morgra, a she-wolf of mysterious and frightening abilities, was once cast out of her pack for an unnatural crime and forced to wander the hostile lands of Transylvania alone. Through cunning and natural dominance, Morgra survives and makes herself leader of a strange...

Published by D1ngo , 1 year ago
The package of the book was torn open at multiple locations, 4 different spots where someone has grinded red marks into the covers; 3 in the front and 1 in the back. Front cover folded in one corner and same with back cover. Asked for very good condition and got an acceptable one. Besides that, all pages are in contact and will update my review the moment I finish the book.

Through a wolf's eyes

Published by Mooneye , 1 year ago
Beautifully written. Told from the wolf's view point. It shows pack life, superstition and how humans effect their world. Highly recommended for all ages

Published by Alex , 1 year ago
I found this book a while ago at my local library where I checked it out because it had a wolf on the cover and didnt expect to like it so much. I loved Larka and her journey and loved getting the different perspectives of her family and those outside it. The book is a little sad but rhe world thats built in it is amazing. It defiantly made me feel like I needed to keep reading to find out what happens to the characters. This book also lead me to his other books which have all been fantastic. When I found it on here I ordered it, along with several others by the author, immediatly and couldnt wait for it to arrive. I ordered the book in very good condition and wasnt really sure how it would arrive since before I always got like new ones but it came in very good condition,no rips or tears or big damage. It has very light marks from being banged around and feels a little more used than liked new books but not anymore so than the books I regularly read from my own collection. It shipped quickly and was bought a very good price, definitely recommend

I cannot express words for this book

Published by Thriftbooks.com User , 6 years ago
On my list of favorite books, this one is way up there. I was absolutely stunned at how well this book was written. The imagery, the description, the action packed scenes, beautiful Larka and Fell. The story line is so rich, with a mix of magic and the world of nature. I HIGHLY recommend you read this. Great book for anyone of any age, young or old, you will love it.

This is one of the best books ever written

Published by Thriftbooks.com User , 17 years ago
This books is, by far, one of the most outstanding of its time and genre. Clement-Davies has taken the wolf and turned it into a being full of beautiful intelligence, wisom, and faith. He gives them their own religion and culture, making them more realistic than any fantasy that I have ever read. If anyone wants a good book, this is the best of th best -the cream of the crop! It is my favorite book of all time! It is better than the Harry Potter books -better than Eragon. Read this, and you will never look at wolves in the same way again! FIVE STARS!!!!!!!!!!!!!!!!!

A Beautiful Book for Strong Readers

Published by Thriftbooks.com User , 17 years ago
This is one of my three favourite books of all time. I could almost not bear to read other reviews people wrote on it because I can't stand people criticizing it. It is so beautifully written and the message is so deep that every time I've read it (three times) I've refused to talk to anyone during the day and cried myself to sleep at night for at least a week. And I am seriously not a person who cries very much. The only other books that have EVER made me cry are The Amber Spyglass and the 5th Harry Potter book. Some people find The Sight confusing and long. I read it when I was ten and I did not find it hard at all. Actually, the hardest part was looking at it after I had finished because I'd start to want to cry again. Part one of this book is mainly about a pack of wolves. Palla and Huttser, the Drappa and Dragga, or leaders of the pack, are fleeing Palla's half sister Morgra, a wolf who killed a pup in her youth and was forced out of her pack. Palla gets to the place of her birth and gives birth to two pups, Larka and Fell. Larka and Fell's puppyhood is entirely destroyed when the pack finds out that Larka has the sight, a sort of supernatural power that lets you talk with birds, see the future in water and control others. They also hear a legend of the sight and a child and a sacrifice that Morgra is trying to fulfill. At one point Morgra tries to join their pack and they refuse to let her so she curses them and they all begin to die one by one until the only ones left in the pack are Huttser, Palla, Larka, Fell, and Kar, a pup from Palla's brother's pack whose parents were killed by Morgra. Then something terrible happens that splits them all up (I'm not going to say what) Sounds extremely sad and complicated so far, doesn't it? Well it's not. I'm just not very good at summarizing. The story goes on with more surprises, more terror and more tragedie. It is intrancing. I believe that only when a character you like dies do you really realize how much you really liked them. That's what happened to me numerous times anyway. The other thing is that after finishing this book I felt that I had actually learned something. A mesage. Not many books are like that. The Flaws: Absolutely NO book is perfect and even my favourites are not exceptions. I think this book may have had a few too many characters and a tad too much death. For instance, though Khaz made the story that much sadder, I don't think he was really developed enough to add anything apart from a bit of texture. Not that it would have been better if he had been developed, the book is certainly long enough already. I also think it was a little gruesome at times-I mean do we really need description of an insane wolf sacrificing pups for reasons we are never explained? However, the description was beautiful, the meaning was strong, the characters were amazing, even though Larka got a little on the perfect side by the end, and the story was brilliant. I loved the wolf language and eve

Published by Thriftbooks.com User , 19 years ago
I read the the back of the book and I thought this is stupid. MAGIC WOLVES! c'mon? I read the book anyway and man am I glad. This isn't some strange sci-fi with aliens and wolves fighting side by side. This is book has it all. Combat. A Difficult Journy. Friendship. Death.( if you have a weak stomache don't read the last 50 pages)and a twist ending that will take your breath away. If you don't buy the book here, go to a library, do SOMTHING! Just make sure you read it!

He's is the best writer in the world! (Apart from JKRowling)

Published by Thriftbooks.com User , 19 years ago
I read it when I was eleven, and I'm reading it again, its just soo GREAT! The suspense in this book is fabulous, its a REAL page-turner!! I read David Clement-Davies' first novel, Fire Bringer, it was just as good as this one!!! I am a real wolf-lover and really like The Sight, hes just a really awesome writer!About The Sight: Its about a pack of wolves fleeing from the evil wolf Seer, Morgra, which just so happens to be Palla's, mother of the main characters, Larka and Fell, half-sister. When she gets rejected twice from the pack, Morgra curses the pack and soon this evil curse gets to the packs' head until finnally, Palla and her mate, Huttser, get into a fight and Larka leaves the pack when.... oh I'll just leave it at that for you to figure out how that happened.Happy reading!

Another amazing work by David Clement-Davies

Published by Thriftbooks.com User , 20 years ago
I remember the day I finsihed Fire Bringer I happened to see this in a Book Store. I was estatic. Fire Bringer was one of my favorite epics and this looked to be just as good. And it was! The Sight tells the story of a family of wolves. When Huttser and Palla have two wolf cubs, Larka and Fell, they are shocked when Palla's evil sister Morgra comes for a visit. Morgra is cruel and harsh and wants nothing more than to be a part of the cubs life but the pack denies it. In turn Morgra casts a horrible curse on the pack which touches everyones life in more ways than one. Larka, as she grows up, discovers that she has the Sight, a strange and mysterious power that is both a curse and a gift. Larka hates this, all she wants to be is a normal wolf, but she cannot have this at all. Becasue her new powers are developing quickly and everyone around her is suffering becasue of it. She runs away, seeing it as her only hope, but sooner or later the Legend that everyone fears so much and Larka's destiny must be fufilled.The Sight is an amazing book. Just like Fire Bringer, the author manages to tell a wonderful animal fantasy story while weaving in history, mythology, and religion on the way. The wolf charecters seem more human than anything at times but they also keep their natural insticts, which I find impressive. If you're a fan of Fire Bringer or just animal fantasy read this book.
Trustpilot
Copyright © 2022 Thriftbooks.com Terms of Use | Privacy Policy | Do Not Sell or Share My Personal Information | Accessibility Statement
ThriftBooks® and the ThriftBooks® logo are registered trademarks of Thrift Books Global, LLC