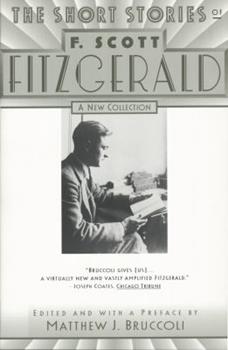 Today F. Scott Fitzgerald is better known for his novels, but in his own time, his fame rested squarely on his prolific achievement as one of America's most gifted writers of stories and novellas. Now, a half-century after the author's death, the premier Fitzgerald scholar and biographer, Matthew J. Bruccoli, has assembled in one volume the full scope of Fitzgerald's best short fiction: forty-three sparkling masterpieces, ranging from such classic...

Published by Thriftbooks.com User , 18 years ago
The use of language doesn't get much better than this. Each sentence is a work of art and a pleasure to read. I smile as I read. The stories themselves are so clearly placed in a post-WWI setting that they are a glimpse into life in the 1920's - as, I believe, Fitgerald wanted to show. Also, to me, any Fitgerald work edited or or explained by Matthew Bruccoli is informative & interesting. The above, though, is to those who like Fitzgerald. To me, his is special beyond many other authors' writing. If you've never enjoyed his work before, this book won't change that. If you've never read anything by Fitzgerald, I would suggest starting with "The Great Gatsby."

Published by Thriftbooks.com User , 19 years ago
F. Scott Fitzgerald wrote tons of stories during his lifetime--something around 134, total. This book, however, contains the most elite chunk of those writings. To start, "Bernice Bobs Her Hair" is one of Fitzgerald's most-read stories. I have read it myself, but have found better ones. "The Ice Palace", for instance, has a remarkable ability to make its readers walk away saying "I relate to this!". "May Day", my personal favorite, is about people on top sinking to the bottom, and people on the bottom sinking lower. At least, that's the abridged summary, there's alot more to it then that. "Winter Dreams" is another winner, but I liked "May Day" better. All of his stories generally pertain to Fitzgerald's masterpiece, "The Great Gatsby". In other words, they all contain that one character desperately searching for the missing piece of the puzzle. That can be either the one element that would make his/her life complete, or launch it in a different direction. Why does he do this so well? Because this theme is partially autobiographical. Fitzgerald started off at Princeton where he made hardly any friends. Then he moved on to the Southern US when he joined the army. This is where he met Zelda. But Zelda did not want to marry him due to his lack of money. So Fitzgerald began writing in persuit of the dollar to support Zelda. His plan worked and he was a big success...for a while. Then he moved, in despiration, to Europe in order to gain a better status. This didn't work either and he ended up dying in Hollywood at age 40. His wife, Zelda, went mad and was institutionalized a few years prior. This should be kept in mind as you read his short stories, there are definate parallels!

Published by Thriftbooks.com User , 20 years ago
As a devoted admirer of the form, I can tell you that this book has more gems in it, POUND FOR POUND that virtually any other book of it's type.Do you enjoy the poetry of Keats and the other Romantic poets? Do you enjoy Shakespeare's sonnets? Then you'll LOVE this book. It BREATHES, it shivvers with vitality and lyricism. I've read the entire book twice, and individual stories like "Rich Boy", "Babylon Revisited", "Absolution"; which many consider as a trial for the "Great Gatsby", "Jacob's Ladder", "Winter Dreams", etc., too many times to recount. THERE IS BEAUTY AND POETRY IN THE WRITING! Does the plot always nail us to our chairs? No, not even in Gatsby; but the writing does. That is why I agree with Gertrude Stein's assesment of Fitzgerald vis-a-vis Hemingway: That his flame burns a little brighter. She was so enraptured by "Gatsby", that she drew a line on her wall, with the request to "please, next time, write one THIS thick".Are they all great? Well, to a degree, greatness is in the eye of the beholder. SOME individual stories which are raved over by critics and readers alike leave me relatively cold. "Benjamin Button"; the case of a person born elderly and "aging" in reverse, to me reads like bad science fiction. "Diamond as Big as the Ritz", is interesting only in several short sections in which Fitzgerald is trying to describe the most opulent scene which his fertile imagination can create. The rest of if to me is more farce than satire; and what precious little satire is available, seems a bit threadbare.BUT IF YOU HAVE A SENSITIVITY FOR PURE POETRY, you can not help but be moved by this book. Look at it this way, Hemingway wrote "Moveable Feast", BECAUSE HE WAS INTIMIDATED BY FITZGERALD. Did Fitzgerald drink too much? Sure he did, but so did Joyce, Faulkner, Lardner, and Hemingway himself. It's nothing but lamentable, but we can't start disregarding writers because of their personal habits, or we're all going to be reading O Henry and James Whitcomb Riley.Did Fitzgerald flunk out of college? Yes, that is true also, but Hemingway didn't even GO TO COLLEGE, and has a memorable quote in a short story that "education is an opiate of the people". Edmund Wilson was a fantastic scholar--and a boring writer. Don't judge the EXTRANEOUS, judge the writing itself. Don't confuse brilliance with being an academic. Einstein himself was a "C" student.Too much is made about Fitzgerald's own negative assessment regarding his short stories. Scott could never handle pressure. He attributed this facility for "wavering at the critical moment" as a bequeathal from his father. It may have made him feel better to belittle the work he did everyday to earn his bread--so at least he could not be held to his own impossibly high standards for something so mercenary, or so goes the logic. But he was craving desperatly for money during much of his life, so doesn't logic also imply that if he could earn more money for ONE story than the years of labor that went into

Published by Thriftbooks.com User , 21 years ago
Don't be misled by another reviewer who claimed that this book "leaves out his (Scott's) hits", as if that were a way to speak about pages written in blood. It doesn't leave them out anyway."May Day", with its tremendous symbolism and exploration of early socialism in this country. The insites into the North/South dichotomy reflected in his marriage to Zelda, and expounded upon in Ice Palace. The incredibly beautiful story "Winter Dreams" will strike a resonant chord with anyone who has every realized the gossamer nature of their most cherrished love illusions--I could go on about virtually every story in the Book--and for at least a little while I shall.Not a big fan of "Diamond Big as the Ritz", or "Benjamin Button", but they are interesting as exercises in literature for anyone drawn to fantasy. However when Fitgerald is dealing in a lyrical way with he topics which made Gatsby the Greatest Book of the century; as he does frequently, he is not to be surpassed.Jacobs ladder, with the poignant story of a slightly (ahem) older man's fondness for a young girl which turns into a devastating love unrequitted for the adult. The novella/story Rich Boy, which I must say in agreement with Ring Lardner, contains if not the actual material, certainly the germ of many another authors novel's worth of writing. "Babylon Revisted" is one of the greatest short stories of this or any other author in this or any other time.And then of course the wonderfully humorous and whimsical stories like "Dice, Brass, Knuckles, and Guitar", and "Jelly Bean"--yet still with that charactersitically Fitgeraldian sympathy for his characters. The Basil Duke Lee stories are the best of that genre ever written. Period. OK, I'm breathing easier after seing that last ridiculously tepid review.If this book were priced by lyricism, insight, and general beauty of the prose, it should go for well over $1,000's in relation to other books of its kind. An insult to Fitzgerald that it is sold this CHEAPLY.

The essence of literary genius distilled in one volume.

Published by Thriftbooks.com User , 22 years ago
This book is the wellspring of Fitzgerald's literary genius. The first treat is Brucolli's informed selection of Scott's some 165 works and his brief, beautiful preface...followed by 43 perfectly crafted gems from the master: Francis Scott Key Fitzgerald. I read a clutch of Fitzgerald novels in my late teens. More than 20 years later, I started on this impeccable volume, which unfurled an additional world of wonders. Brucolli has gathered the best of Fitzgerald's short stories--in other words, the best of 20th century American short fiction--and provided brief, illuminating introductory passages for each journey into Scott's glorious prose. Some stories are realistic, while others are full of phantasm. Some are cruel and unnerving, while others are sweet and whimsical. But all of them are informed by Scott's style: poetic, melancholy, vibrant, forlorn, youthful, aged, dated, and eternally modern. I literally fell in love with Fitzgerald over the course of this book. He may have been an alcoholic spendthrift in life. But, in the undying world of words, he was a man of almost painfully honed sensibilities. Prepare yourself for a slow read--because you'll want to reread each phrase, each sentence, each paragraph, and each story....over and over again. This century has produced a pantheon of titanic American masters of short fiction: Hemingway, Faulkner, Welty, O'Connor, Cheever, Porter, Jewett, Stegner. Yet, when the sun sets, Scott Fitzgerald, gone too soon at 44, towers above all. Buy it! You'll savor it for a lifetime.
Copyright © 2020 Thriftbooks.com Terms of Use | Privacy Policy | Do Not Sell My Personal Information | Accessibility Statement
ThriftBooks® and the ThriftBooks® logo are registered trademarks of Thrift Books Global, LLC