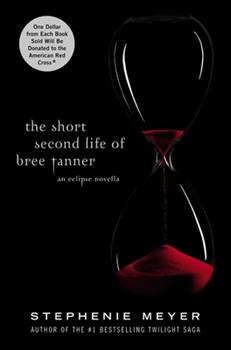 The Short Second Life of Bree Tanner: An Eclipse Novella

Newly turned vampire Bree Tanner lives in terror -- and must find her way out of untold danger -- in this pulse-pounding novella, a companion to Eclipse.Bree Tanner, a self-described vampire nerd first introduced in Eclipse, lives in terror in a coven of newborn vampires. She is a member of Victoria's vampire army, and as that army closes in on Bella Swan and the Cullens, she finds her first friend and discovers a truth about daylight.While fans may...

Published by Grace Ibarra , 4 months ago
I grabbed myself a copy the moment I saw it at Barnes! came in like new, and for a great price! I'm excited to dig in.

Published by Morgs , 1 year ago
This book is so good, and for 4 bucks!? Definitely worth it if you’re into the twilight saga series

Great book and In Great Condition

Published by Cassie , 1 year ago
I loved this book. It was fun to hear a different side of the vampire life compared to how the Cullens live. I ordered the book in like new condition and it was exactly what I expected!

Wish There was More

Published by Victoria , 2 years ago
This novel brought a fresh set of eyes to the series as a whole, and honestly, I wish Meyers would write more novels in the same world/timeline as Twilight as she did with this novel. It’s a good, quick read, with a sympathetic heroine.

Published by Heaven , 2 years ago
I had already watched the movies so I knew how it ended but I never thought I'd love a character so much without knowing them for very long. Don't expect drawn out monologues and deep thoughts, straightforward book that'll hurt your heart. Made a spotify playlist for it

Published by Madison , 3 years ago
I haven’t actually read it yet but I’m super happy that it came in great condition! I flipped through the pages and nothing was bad. I ordered it in good condition and was pleased that someone took really good care of this book 😊 The perfect little story to finish up my Twilight saga collection.

If you love the Twilight Saga you won't be disappointed!

Published by Thriftbooks.com User , 12 years ago
Like many others of the Twilight lovers, I was frustrated when I first heard about this book. I was like " Why doesn't Steph Meyer work on the Midnight Sun instead of this? Bree? Bree who?" I'm so GLAD that she wrote this book. It's amazing. I love the way that we get to know the newborns. I got so sympathetic to Bree, Diego and Fred, and I love their caracters. And what big coward Victory was and how the Volturi(or Jane???) hate and are jealous of the Cullens. I hope Steph Meyer will someday write more about the Cullens family and tell us what happened to Fred.I will never get tired of this series. She can keep writing and I'll keep buying it. :) Updating it: I'm so glad that I was able to read this book before Eclipse came out. Went to the movies today(Jun 30th)to see Eclipse, and I could picture all of the scenes where Riley/newborns/Bree/Volturi were involved due to the information that this book gives. I felt like I was able to pick/understand all of the hidden details. My advice to those haven't read this book yet? Read it before watching the movie.

Published by Thriftbooks.com User , 12 years ago
I quite enjoyed reading "The Short Second Life of Bree Tanner," because, although I knew it would end in tragedy, over before it really began, it was absolutely compelling reading the story of someone who was both a villain and a victim. I don't really know of anything else like this; in most novels (especially fiction), the narrator is the protagonist, the innocent character, or on occasion, as in a good amount of Poe's works, the narrator is the antagonist, the criminal, who is more or less writing a confession. But in this book, with Bree, she is a slave to her nature, the murderer who feels no remorse, and yet, if she had been given a chance, she would've chosen something else. As I said, a very unique perspective, one which is, to me, unforgettable.

A Good Addition to the Twilight Universe

Published by Thriftbooks.com User , 12 years ago
I feel like this is a great addition to Eclipse. It's not suppose to be a stand alone novel like the rest of the Twilight books. It's just a back story to an already existing book. I thought it was great! It made me hate Riley more, and the rest of the newborns less. I felt aweful for Bree and Diego, and wished they had a longer story together. I guess that's the point.. the newborns don't get to live long enough to have a great story. I think that's part of their irony and why Stephenie gave you that back story. I would just like to go over a few of the things people said were negatives, and maybe explain it better for them. 1. People have complained that the Cullens didn't save Bree. Why would they risk losing one of their own for someone they don't know at all? It would be inevitable, just like in Breaking Dawn. They know if they fight for her, one or all of them could die. 2. That Bree doesn't have a back story / human story. Most of the Cullens have a hard time remembering their past, especially Alice. Bree said that her father beat her, so she left home. Then, she got stuck on the street and was starving. Riley offered her a burger for her immorality, and she took it. That's the most she can remember, and that's more than Alice can remember. 3. That the story isn't long enough or in depth enough. Stephanie Meyer has said herself that this was never meant to be a stand alone book. It was meant to help the directors of Eclipse get a better understanding of the newborns. Then after that, wanted to add it to The Twilight Saga: The Official Guide as a back story to Eclipse, but it was too long. Since Eclipse was coming out soon, they thought it would be a great idea to release it alone for readers to better understand what is going on in the book and movie on the other side of things. PS: I really hope Fred gets to meet the Cullens! :)

Published by Thriftbooks.com User , 12 years ago
Bree succesfully destroyed what little shred of respect I had for Bella. For the record, I hate the way SM writes. Her twilight saga however, for all of its infinitesmal chagrin, made me feel seventeen again, in a good way. That has plenty of merit in my book and I am a huge fan of the series, despite its imperfections. Now, on to Bree. I was surprised when she died in Eclipse. In fact everything about this character has suprised me. She falls in love like a normal person. It was very refreshing to visit the twilight universe through a perspective that could think about more than one person or thing at a time. I was enamored by Diego and downright smitten with Fred by the end. However, I did not have to be reminded of these characters' glory every three sentences#:gasp: could SM be learning how to write?. This was a huge problem throughout the twilight saga for me. I really wanted to get to know the rest of the characters, but had to read for the milionth time about edwards perfect nose instead. The same thing happened in Breaking Dawn through Jacobs perspective, which was even worse because then we had to hear about one dimensional Bella for 300 pages :(. Bree was able to fall in love with diego, grow to appreciate Fred and (whoa# think for herself all at the same time! Bree was legitimately brave and self sacrificing. She accepted the dangers before her with a healthy fear, not a bella-esque sense of martyrdom. She ran to the front lines for Diego. She didn't sit in a tent pouting and whining about how her hormones were too much for her to handle. As for the whole "super-ninja" talk. The whole "skilllzzzzz" thing made me let out an embarassed chuckle. Other than that I am 24 years old, and must admit that I've made a ninja reference in casual conversation on more than one occasion. It felt a hell of a lot more legitimate than "holy crow!", thats for sure!

Published by Thriftbooks.com User , 12 years ago
Not fully understanding what the term Novella meant I was surprise ad how thin this book was compared to the rest of the Twilight series. While I was disapointed in Stephine Meyer's last book THE HOST, this story was as great as any Twilight book in the series. I admit that I have mixed feelings about Bree already being a vampire for around three months and only having the story of her human life told on conversation with her best friend in the vampire clan. It is interesting reading Bree and other characters reactions to how sunlight reflects on their skin rather than burning into flames and other disproved vampire myths. Diego and many of the other vampires in the clan also have their own interesting like quirks and vampire mind gifts that makes them every bit as interesting to read about as The Cullen family. Especially the ones who think of themselves as super-heroes and argue about which super hero in the marvel comics universe is best. Fans of the original four Twilight books need not to worry as Jasper, Victoria and other classic characters do make appearances in this book so that those who didn't get enough of them before and read more about them.
Trustpilot
Copyright © 2022 Thriftbooks.com Terms of Use | Privacy Policy | Do Not Sell or Share My Personal Information | Accessibility Statement
ThriftBooks® and the ThriftBooks® logo are registered trademarks of Thrift Books Global, LLC