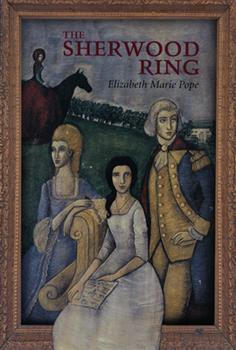 Newly orphaned Peggy Grahame is caught off-guard when she first arrives at her family's ancestral estate. Her eccentric uncle Enos drives away her only new acquaintance, Pat, a handsome British scholar, then leaves Peggy to fend for herself. But she is not alone. The house is full of mysteries--and ghosts. Soon Peggy becomes involved with the spirits of her own Colonial ancestors and witnesses the unfolding of a centuries-old romance against a backdrop...

Published by Thriftbooks.com User , 16 years ago
I read this book after reading (and loving) The Perilous Gard. Although not quite as good as that book, it is still DEFINITELY worth reading for any historical fiction or fantasy fans. I loved it and couldn't put it down! The book weaves together the stories of several different characters, some from the revolutionary war and some from modern times. Peggy is a young orphaned girl who goes to live with her uncle in the family's historical home. She meets up with an Englishman named Pat, one of whose relatives fought in the war, but her uncle kicks him out of the house upon hearing his name. The other four main characters, Eleanor, Dick, Barbara and Peaceable, are all ghosts. One by one they appear to Peggy, each telling a bit of their story. Gradually,a pattern begins to appear. Somehow, the story of the ghosts is related directly to Peggy's own life and problems. There is a good bit of romance in the book too, if you like that sort of thing. But it's a sweet and gentle kind, not overdone or sappy. I really liked seeing the characters (Dick/Eleanor, Peaceable/Barbara and finally Pat/Peggy) get their happy endings. The characters aren't developed as much as they could be, but the story is still great with an unexpected twist at the end. Not as good as The Perilous Gard, but close!

On my shelf of treasures

Published by Thriftbooks.com User , 16 years ago
It's been more than 40 years since I first read The Sherwood Ring, and it remains one of my very favorite books. I reread it often, but I think of it even more often, as my New England neighborhood is full of colonial-era houses, paths through overgrown woods, and little lakes like those in the story. I'm not sure why this book works so well. The characters are well-drawn but not so terribly original, and the heroine's situation is unbelievable even for the repressive 50's. However, the ghosts' narratives are so vivid, concise, and well-crafted that I get a thrill at each rereading. I love the way the author cared enough to set each section in a different time of year, evoking each season with just a few sentences. There is something fundamentally cinematic about the presentation of The Sherwood Ring. The emphasis on visual details, the intercutting of modern and historic scenes, and the snappy dialogue remind me of a movie. There's about one feature film's amount of plot, as well. When I was younger, I thought it would make a good film, but I'm sure now that it would get messed up in the process. When the author's later book, The Perilous Gard, came out many years later, I found it flat in comparison, though maybe I was suffering from an overdose of pseudo-Celtic mythology at the time. The American Revolution setting is unusual, and the issues around the loyalist opposition in New York State actually inspired me to do some research on this subject for a college paper. I agree with other readers that it's a pity Elizabeth Marie Pope published only two books. I'm so grateful, though, that she never got into writing the sequels and bloated trilogies that crowd today's bookstores. The Sherwood Ring is one little jewel of a book, a unique treasure.

Recommended for young and not so young adults!

Published by Thriftbooks.com User , 19 years ago
(...) The main character, Peggy, wasn't fleshed out much. And I went into it knowing this. But after reading about her ancestors and their adventures, who even cares about Peggy? They are so much more interesting! I could care less how the story was pieced together poorly as a bunch of ghosts popping in and mind reading a foul-tempered Peggy. But their stories were great! And that they were told by ghosts....The characters have so much to them that they are hard to let go of when you finish the book. Theres a lot to this book. After I finished, I went over a couple of the scenes again because they are so good. This book was written in the fifties, so the art is a bit bizarre, but its really a good book on Rev War in New York.Pretty good in the history sense, too. I was quite impressed.

Published by Thriftbooks.com User , 20 years ago
Let me first dispel any misconceptions you might have. Upon first hearing the title, I assumed that this was a Robin Hood retelling. It isn't. This is a children's historical fiction, but in this case the history imparts a vivid backdrop for the story to take place. You never feel pressured to know overmuch about the events of the American Revolution (although your enjoyment will be enhanced if you do). History isn't a dry, weighty affair in this book--it's what gives _The Sherwood Ring_ its breath.I've also heard this called a ghost story. Technically true, but each of the characters is vividly, blazingly drawn, undimmed by any ghostliness. Their purpose is not to haunt the present as echoes of the past. In fact, it is *their* story which forms the heart of the book, and I argue that you spend more time in the time of the American Revolution than in the present day. The appearance of those characters as ghosts only provides you with a chance to observe a delightful parallelism between *then* and *now.*Throw in some romance. Not the soppy kind that you want to wring out, but the thoughtful kind between two well-suited characters that makes you want to cheer it on. There's a good share of humor, as well. Despite the presence of a war in one storyline and ghosts in the other, this really is not a grim book at all.So: one American corporal, his normal arrogance dampened by desperation as he searches for a British conspirator who slips through his hands. The butterfly-deft woman who taunts him for his failure. His sister, quite sensible, but even the most clearheaded can get a bit muddled when caught in a snowstorm, and so she rides straight into her own share of problems. And a hunted man, showing off his cleverness to supposedly win his uncle's approval, but when he runs into the object of his true desire, he decides to go after what he really wants.And as Peggy meets each of them and becomes entranced by listening to their lives, so will you. Caught in Pope's clear, strong prose, this tale is a definite read for both children and older readers.

A most unusual ghost story...

Published by Thriftbooks.com User , 22 years ago
When orphaned Peggy Grahame goes to live with her Uncle Enos in the old Grahame ancestral home, the past comes alive. The ghosts of her ancestors come and tell her about their lives in the Revolution, while actual current events mirror those of their pasts. Barbara Grahame, the most frequent ghostly visitor, is an independent and intelligent young woman living in the American Revolution. Her interaction with the extraordinarily clever British officer, Peaceable Sherwood is very enjoyable to read...particularly as Peaceable is nemesis of Barbara's brother, Dick (a young captain fighting for American independence). At the same time, serving to frame the story, Peggy uncovers mysteries of the past, and is led to her own romance with a young man from England. A very unusual and thoughtful Revolution story with possibly the best ghosts I've ever read about.
Copyright © 2022 Thriftbooks.com Terms of Use | Privacy Policy | Do Not Sell My Personal Information | Accessibility Statement
ThriftBooks® and the ThriftBooks® logo are registered trademarks of Thrift Books Global, LLC