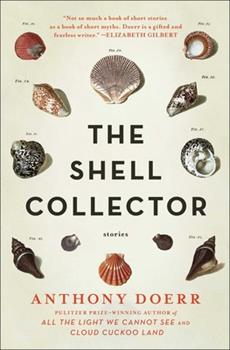 The "perilously beautiful" ( Boston Globe ) first story collection by the author of the acclaimed Pulitzer Prize-winning #1 New York Times bestseller All The Light We Cannot See . The exquisitely crafted stories in Anthony Doerr's debut collection take readers from the African Coast to the pine forests of Montana to the damp moors of Lapland, charting a vast physical and emotional landscape. Doerr explores the human condition in all its varieties--metamorphosis,...

The Role of Mystery in Fiction

Published by Thriftbooks.com User , 16 years ago
If you were to tell me that The Shell Collector features mostly stories about people who find majesty, wonder, awe, and rejuvenation through the Mystery of Nature, I would roll my eyes and dismiss the story collection as a precious sentimental meditation on the natural world worthy of a Hallmark Card. However, the aforementioned themes are rendered with expertise, vigor, and indeed pure poetic prose so that even a cynic like myself was able to surrender to Doerr's magical stories. Here are some highlights: 1. The Shell Collector: A scientist who collects shells lives like a hermit in a isolated coastal land in Kenya where he discovers an elixir, derived from a sea snail, which forces him to contemplate the manner in which civilization usurps all of nature's wonders for its commercial purposes. 2. The Hunter's Wife: A man takes his wife into the barren wilderness where she eventually leaves him to pursue a career as a celebrity New Age figure. 3. The Caretaker: An African refugee who has seen unspeakable evil during civil war and has been coerced into doing something that violates his conscience moves to an ocean house in Oregon where he learns, through the help of a young woman, to find his redemption. 4. Mkondo: A white fossil hunter goes to Tanzania where he becomes obsessed with a young African woman whom he marries and takes back to Ohio. There the woman languishes in despair until she finds her vocation in photography, which brings her closer to nature. Over and over again, Doerr pits the vulgarity and soul-sapping forces of civilization with the pure spiritual powers of nature as his characters attempt to straddle both worlds. For a thematic companion to Doerr's stories, you might want to look into the 1971 film masterpiece, set in Australia, called The Walkabout, which wonderfully is now available on DVD.

Published by Thriftbooks.com User , 17 years ago
I'll keep it short and sweet. Three things make this book stand out from other short story collections:a) It is written incredibly well. The stories flow effortlessly, are written with excellent imagery and figurative language, and invoke everything from heartache to nausea.b) It is one of those books that you could read one time for enjoyment... or you could read it three times and dig up all the many meanings.c) This is not your Nora Roberts soap opera. Anybody can use sex and violence to make a book captivating, but it takes a master to weave a beautiful story from something more simple. Without becoming boring, Doerr masters this.Read it, love it, and tell your friends to do the same.

Published by Thriftbooks.com User , 19 years ago
Anthony Doerr is an amazing talent. His chronological age (28) does not match his literary acumen, for here is a new writer who knows his craft so well that he is destined to be one of the more important authors of his generation ... and beyond.In THE SHELL COLLECTOR Doerr has assembled short stories that are wide ranging in locale and in content. How he is able to convey with such clarity the terrain and atmosphere of Liberia, Finland, Bavaria, Ohio etc may be credited to his own travels, but I think it is more a credit to his gifts of creating backdrops for his dramas. The young man is so in tune with nature that in a few words he is able to descibe the advent of spring, the caustic stillness of winter, the miracles of ocean life and seeds becoming plants as well as the domain of butterflies. His characters are driven in a synchronicity with natural forces to the extent that at times we are left to ponder whether the human with a name is more the main character than the land wherein he dwells.Another aspect of the excitement these stories generate lies in the incredible tales themselves. There are no usual rehashs of familiar prototypes: each story is a cosmos rarely explored. Combine the magic of his limitless imagination with the glory of his writing skills and see if you don't agree that this is a Major New Voice in American literature. One waits for an extended novel without any concomittent fear that he will be able to produce it. Bravo!

Published by Thriftbooks.com User , 19 years ago
Doerr's writing is what reader's hope to find each time they open a new book: tales woven so skillfully you have to read to the end in one sitting, and then return for more. It is also the hallmark that we would-be writers strive to achieve with each revision. "The Hunter's Wife" remains my favorite. It is a melded work, really -- a blend of prose and poetic imagery that is startlingly beautiful. The first time I read the paragraph where Mary Roberts touches the hibernating grizzly and says matter-of-factly "Want to know what he dreams?" I gasped aloud I was so taken by surprise. And then when she names the things, as if from a grocery list: "Summer . . . Blackberries. Trout. Dredging his flanks across river pebbles" -- images evoked so simply and clearly they could be our own memories -- it brought tears to my eyes. I recommend Anthony Doerr to anyone who enjoys the work of a true craftsman.

Published by Thriftbooks.com User , 19 years ago
The cover of Doerr's "The Shell Collector" is what first caught my eye as Randall and I entered Borders. When I opened the book, the first line I read was: "She was a grey-eyed growth spurt, orange-haired, an early bloomer, and there were rumors about how she took boys two at a time..." Immediately my interest was piqued. Mr. Doerr's stories read (to me) like wonderfully lyric poems. He, like poet Mary Oliver, has a keen sense for the physical surroundings--Doerr gets down to the most specific detail, putting the reader Right There with his characters. I enjoy reading Rick Bass, Alice Munro, and Lorrie Moore--Doerr's stories delve into what it means to be a human, one who suffers, loves, works hard, fails, succeeds, etc. You know, we're all livin' it. These are amazing stories...I read the book in two nights and find myself thinking about it two weeks later.
Copyright © 2020 Thriftbooks.com Terms of Use | Privacy Policy | Do Not Sell My Personal Information | Accessibility Statement
ThriftBooks® and the ThriftBooks® logo are registered trademarks of Thrift Books Global, LLC