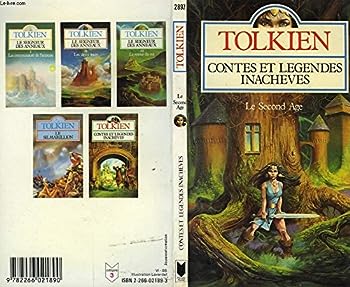 The Shaping of Middle-Earth : The Quenta, the Ambarkanta and the Annals: Together with the Earliest 'Silmarillion' and the First Map

(Book #4 in the The History of Middle-Earth Series)

Poems and prose, maps and chronologies, detours and diversions along the road to Middle-earth . . . Christopher Tolkien has gathered archival materials that his late father, J. R. R. Tolkien, used to... This description may be from another edition of this product.

Overview of The History of Middle-earth Series

Published by Thriftbooks.com User , 13 years ago
Collections of an author's work are often confusing, particularly when what the author has created is as complex as Tolkien's writings. Here's an overview of the twelve-volume History of Middle-earth, which was edited by his son Christopher Tolkien. Hopefully, it will help you select which book or books to buy. Keep something in mind. In the U.S. Houghton Mifflin publishes Tolkien's authorized works in hardback and trade paperback editions, while Ballantine Books publishes them as cheaper mass-market paperbacks. For some reason, Ballantine doesn't always make it clear that some of their titles are part of the same History of Middle-earth series as those published by Houghton Mifflin. If the title is the same, the content is the same. Which you buy depends on your taste in books and finances. I have copies of both. GROUP ONE, VOLUMES I - V, EARLY TALES These five volumes deal primarily Tolkien's writings before the publication of The Hobbit (1937) and The Lord of the Rings (1954-55). In them, Tolkien was struggling as a still unknown author to create his first history of Middle-earth. Vol 1 & 2, The Book of Lost Tales Part 1 ( 1983) & 2 (1984). The Book of Lost Tales was written during the 1910s and 1920s. Wikipedia describes it this way: "The framework for the book is that a mortal Man visits the Isle of Tol Eressëa where the Elves live. In the earlier versions of the `Lost Tales' this man is named Eriol, of some vague north European origin, but in later versions he becomes Ælfwine, an Englishman of the Middle-ages." Vol. 3, The Lays of Beleriand (1985). These are collections of poems, many of them incomplete, written between the 1920s and the late 1940s. Vol 4, The Shaping of Middle-earth (1986). As you might guess by the title, in this book Christopher describes how his father shaped his vision of Middle-earth from the primitive The Book of Lost Tales to early versions of The Silmarillion. This theme is taken up again in volumes X and XI. Vol 5. The Lost Road and Other Writings (1987). Along with other writings this volume includes Tolkien's drafts of a tale about time travel. Wikipedia describes it this way: "The Lost Road itself is a fragmentary beginning of a tale, including a rough structure and several intiguing chunks of narrative, including four entire chapters dealing with modern England and Numenor, from which the entire story as it should have been can be glimpsed. The scheme was of time-travel by means of 'vision' or being mentally inserted into what had been, so as to actually re-experience that which had happened. In this way the tale links first to Saxon England of Alfred the Great, then to the Lombard Alboin of St. Benedict's time, the Baltic Sea in Old Norse days, Ireland at the time of the Tuatha's coming (600 years after the Flood), prehistoric North in the Ice Age, a 'Galdor story' of Third-Age Middle-Earth, and finally the Fall of Gil-Galad, before recounting the prime legend of the Downfall of Numenor/Atlanti

Published by Thriftbooks.com User , 15 years ago
. . . continues in this, the fourth volume of "The History of Middle-Earth" series. Christopher Tolkien, in his 12-volume "History of Middle-Earth" series presents the notes, stories, fragments, and legends of what was to eventually become "The Silmarillion" in two stages. This book is the final stage of what scholars would consider "The Early Silmarillion"; continuing on the work presented in the two volumes of "The Book of Lost Tales". If the Tolkien fan is interested in seeing how the mind of the Master developed and progressed his stories, this volume is absolutely indispensable. It is especially interesting to compare "The Shaping of Middle-Earth" with "Morgoth's Ring" and the other volumes of what Christopher calls "The Later Silmarillion". Once again, thanks is due to Christopher for his labor of love so that we can delve more deeply into Middle-Earth.

Early Notes for The Silmarillion, plus MAPS! Better than Vol III

Published by Thriftbooks.com User , 16 years ago
`The Shaping of Middle-Earth' is the fourth volume of Christopher Tolkien's exegesis of his father, J.R.R. Tolkien's unpublished writings which were done before, during, and after the writing of `The Hobbit' and `The Lord of the Rings'. It is important to realize that beginning with Volume III, `The Lays of Beleriand', these volumes are prepared according to the date on which the elder Tolkien wrote the documents. That this `real world' chronology is roughly parallel to the great ages of middle earth is simply a happy coincidence. One little niggle I have about the emphasis of `Middle Earth' in the title of both this volume and the series as a whole is that the land, middle earth, is just one part of the whole world in which this mythology is played out. It is basically a great continent, roughly similar to Eurasia in size, surrounded by a single great ocean which is, in turn, bounded by the undying lands. This fact is eminantly clear in the crude maps by Tolkien senior presented in this volume. What is also eminantly clear in most of these fragments is the great difference in both geography and physics between our world and the world in which middle earth is embedded. There is no sun and no stars, until the stars are created by some of the `gods', the Valar, who are in turn created by `the one', Iluvatar. The fragments in this volume are mostly early versions of the mythology which was to become the postumously published `The Silmarillion'. As such, it deals with my very favorite character outside of `The Lord of the Rings', the elven lord Feanor who, in a rough parallel to both Adam and Prometheus, disobeys the Valar based on the promptings of the ultimate bad guy in these stories, Morgoth. Even if one buys the unique physics, cosmology, and pantheon of gods and demigods, the hardest part of this and similar writings is how to deal with Tolkien's handling of evil. How, one wonders, are eight `good' Valar duped by the ninth evil one, who is left to subvert the Valar's most favored creations, the elves, and create all sorts of mayhem in Middle Earth. Even if one introduces the arguments about `free will', one wonders how, if you posit a very real supreme being, Iluvatar (Eru), plus eight comparably powerful beings, such beings would let Morgoth get away with being the cause of all this suffering. On a ligher note, I find this book an amazing source of poetic inspiration, even more poetic, sometimes than the overtly poetic `The Lays of Beleriand'. There are phrases and paragraphs here and there which sound like they are straight out of a song by Donoven Leitch or The Incredible String Band. Like almost all the twelve volumes in this series, this is much more a study of fragments than a complete work. Many of the fragments rework the same material, so you find yourself reading the same story over again, in slightly different words. And yet, the power of the created world holds up through the scholarly framework. As with other volumes, there i

Literally, the "Shaping" of Middle-Earth

Published by Thriftbooks.com User , 20 years ago
The Shaping of Middle-Earth concentrates some part of it to actually physically describing the layout of Arda (the World) with some interesting maps drawn by Tolkien in the middle of the book. The book also includes information behind the fall of Morgoth at the end of the First Age.

See the evolution of Middle Earth

Published by Thriftbooks.com User , 23 years ago
In the third volume in The History of Middle Earth series, Christopher Tolkien picks up where he left off with The Book Lost Tales. In this volume you will see the central themes in Middle Earth evolve a little closer to what we see in the Silmarillion. You will see the early Silmarillion and the Annals of both Valinor and Beleriand. Also incuded are maps drawn by Tolkien himself showing his early ideas for the geography of Middle Earth and Numenor. Moreover, in his attempt to make the Silmarillion seem more like a real history (which it is in some of our hearts) Tolkien has translated parts of the Annals and the Silmarillion into the native language of Elfwine, Old English. I recommend this book for anyone who loves Tolkien's works.
Trustpilot
Copyright © 2022 Thriftbooks.com Terms of Use | Privacy Policy | Do Not Sell My Personal Information | Accessibility Statement
ThriftBooks® and the ThriftBooks® logo are registered trademarks of Thrift Books Global, LLC