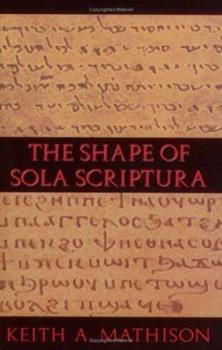 The Shape of Sola Scriptura

by Keith A. Mathison

In what shape do we find the doctrine of sola Scriptura today? Many modern Evangelicals see it as a license to ignore history and the creeds in favor of a more splintered approach to the Christian living. In the past two decades, Roman Catholic and Eastern Orthodox apologists have strongly tried to undermine sola Scriptura as unbiblical, unhistorical, and impractical. But these groups rest their cases on a recent, false take on sola Scriptura. The...

Excellent defense of the doctrine

Published by Thriftbooks.com User , 14 years ago
Overall I was really impressed by this book. He creates a solid argument for the defensibility of sola scripture by differentiating between the varying views of the relationship between scripture and tradition. He argues that scripture does depend on tradition, but is superior to it (as opposed to the Catholic doctrine that they are equal, or the common Protestant doctrine that tradition should be ignored). The only complaint I have is that toward the end it got exceedingly repetitive. I also wasn't sure if his quotes from the early church fathers were taken out of context or not... I don't really have any reason to think that they were, I only wonder because people seem to use the fathers to support a huge variety of viewpoints. Overall definitely worth the read, even if you disagree.

Published by Thriftbooks.com User , 16 years ago
In his book The Shape Of Sola Scriptura Dr. Mathison has provided the church with a very helpful defense and explication of the biblical doctrine of sola scriptura. The author's conviction is that the Magisterial Reformer's understanding of the relationship between Scripture, tradition, and the Church is substantially correct. This understanding, coined sola scriptura, has been vigorously attacked from the Reformation onward. Recent exchanges of debate betrays confusion over the historical data, involve an abundance of theological rhetoric, and one often witnesses the employment of confusing, and contradictory, definitions of terms. Dr. Mathison provides a sober look at church history, brings clarity to the debate with carefully constructed definitions of tradition, and outlines a consistent doctrine of the authority of Scripture and how it should relate to tradition and the church. With these overarching concerns his book is divided into four, logically related parts. Part one surveys history from the apostolic church to the present, with a close eye on what the fathers believed about tradition and Scripture. In part two, the focus moves from history to Scripture itself, whereby he examines what Scripture has to say about itself, tradition and the church. In part three, the author critiques aberrant views, and he carefully defines sola scriptura. Objections and practical concerns for the church are taken up in part four. Each part shall be examined in turn. Part one takes the reader on a journey through the halls of church history. Dr. Mathison believes that it is necessary to gain some historical perspective if one is going to understand the present debate over the authority of Scripture. The focus of the historical expedition revolves around the all too ambiguous term "tradition." Far too often individuals have framed the debate in terms Scripture vs. Tradition. However, the issue is not Scripture vs. Tradition, but rather, Scripture and what kind of tradition? With this in mind, Dr. Mathison surveys the patristic understanding of tradition and Scripture from the early church up to post-Reformation developments. Taking up Heiko Oberman's terminology, Dr. Mathison begins to explore the early church's understanding of tradition. He contends that there is a remarkable scholarly consensus that the early church viewed Scripture and Tradition as completely coinherent and in no way mutually exclusive concepts. The concept of "tradition," as used by men ranging from Irenaeus to Tertullian to Cryil of Jerusalem simply referred to the designated body of doctrine that the Lord Jesus Christ and His appointed apostles brought in to the church; whether written or verbal. This understanding of tradition is coined Tradition I. In addition to being a one-source understanding of revelation, the early church interpreted the Scriptures according to the regula fidei, which is the correct hermeneutical context for doctrinal understanding; the

A Must Read for Protestants

Published by Thriftbooks.com User , 18 years ago
I am not in a position to speak to how well this book functions as an entry in the debate between Protestants and Roman Catholics over the nature and authority of tradition, as I haven't kept up with either side of the argument much in the last few years. In any case, judging from his stated intent in the introduction, Mathison is not seeking to directly engage parties on the other side - rather his goal is to inform Protestants about the debate and to clear away their misunderstandings about what sola scriptura actually is.In the process of doing this, he necessarily engages the Roman Catholic and Eastern Orthodox views, especially as offered by Sungenis and Schmemann. Mathison recognises that the word "tradition" is being used equivocally, and appeals to Obermann's distinction between two views of tradition to offer a better way forward.Tradition I, which he asserts is the position of the fathers and the early Reformation, holds that there is an authoritative tradition, sometimes called the Rule of Faith, about what scripture teaches and how it is to be interpreted. Tradition II, which he says is the teaching of Tridentine Catholicism holds that tradition is instead parallel to scripture and has its own content regarding doctrine and practice. Mathison expands on this by identifying a Tradition-0, or solo scriptura, view, which is that taught by the radical reformers, and which has become the dominant view in American evangelicalism. In this view, the authority of the church is denigrated, and each person interprets scripture autonomously.Having identified this view, he then demonstrates that many criticisms from Roman Catholic apologists are directed at it, rather than the traditional Protestant view. To that extent, he agrees that many of the criticisms are perfectly valid.The first section of the book provides the historical context of the development of the two views of tradition beginning with the patristic period and carrying through the Reformation and Counter-reformation. The second part examines the scriptural teaching on tradition, scripture, and the church.The third part offers a critique of the RC and EO positions, a critique of the solo scriptura view, and a positive statement of the sola scriptura view. The fourth section attempts to answer anticipated objections.Like Mathison's other books, it is well written. Despite being reasonably comprehensive, it is an easy read that can be digested in just a few short sessions of quiet reading time. It is well footnoted and includes a substantial bibliography should the reader wish to further pursue the topic by reading those opposed to him, historical background, or what not. While the book might perhaps have some value in the debate, I am positive that it will be extremely challenging and stimulating to Protestants coming from a Tradition-0 background.

Published by Thriftbooks.com User , 20 years ago
I do not wish to resay what previous reviewers have said. Needless to say, this book is about clarifying the relationship between Scritpture and tradition; clarifying what sola scriptura actually is, saving the doctrine from Rome and from modern evangelicals in a balanced, historical perspective.Mr. Mathison has done the church quite a service. For those who hate the authority of the church and for those who elevate the church above Scripture, this will not be a popular book. It will produce a lot of dialogue, I hope, but it won't sit well. The book is methodical in its historical overview of the role of Scripture. Many things will become apparant from this book: 1) Sola Scriptura or Tradition I(as it is in the book) is the early church's position 2) numerous (and I mean numerous) examples of the fallibility of infallible Roman Catholicism are on display in this book. Rome is ruled by the magesterium of the moment. Since they are assumed to be infallible, they cannot be corrected. Even though any reasonable unbiased person can see that some of their current positions are not ones the church has held in the past. Although, in the end, it is admitted that Rome is part of the visible church. 3) The individualistic notions in modern evangelicalism is really really bad. Too much of the Anabaptists and not enough of the Reformers.Along the way, Mr. Mathison deals with objections and raises many issues. This is highly deserving of his five stars. It is time to place Scripture, tradition, and the church in its proper and historical place. Towards that end, we should pray. And towards that end, I highly recommend this book.

Published by Thriftbooks.com User , 20 years ago
With this book, Dr. Mathison has cleared away much of the confusion concerning the Reformation doctrine of Sola Scripture. Too often apologists from the Roman, Eastern and Protestants churches have debated a false concept of Sola Scriptura. Finally, the doctrine has been clarified and all disputants can point to a definition that will bring greater clarity to the discussion. In this book, he begins by establishing the history of Scriptures place in the church. Traveling from the Bereans in the New Testament through the Early Fathers, Mathison presents a compelling case for the authority of the Bible in determining all doctrinal conflicts. He quotes from the magesterial reformers to show that Sola Scriptura was not new and that they were returning to something that had been lost in the church. He also shows how Protestants have lost the meaning of the doctrine and have embraced a doctrine that would not be recognized by Luther or Calvin. This is a book that should be read by all Christians so that once again the Church can return to the authority of the Scriptures and a hermeneutic that can solve many of our conflicts, if we will only listen.
Trustpilot
Copyright © 2022 Thriftbooks.com Terms of Use | Privacy Policy | Do Not Sell My Personal Information | Accessibility Statement
ThriftBooks® and the ThriftBooks® logo are registered trademarks of Thrift Books Global, LLC