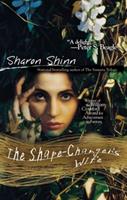 From the national bestselling author of The Samaria Trilogy... this is the novel that launched Sharon Shinn's career and inspired Peter S. Beagle to call her "the most original writer of fantasy since Robin McKinley." Aubrey was a student of the fine art of wizardry. But the more knowledge he acquired, the more he wanted to learn. He traveled in search of the greatest master of all, the gifted shape-changer Glyrenden. From him, Aubrey expected to...

Published by Thriftbooks.com User , 16 years ago
The young magician Aubrey has learned almost all he can from his mentor Cyril, so he is sent to apprentice with the powerful shape-changer Glynrenden. He is warned to be wary of the wizard, and soon notices that the situation is far from normal at Glynrenden's home in the woods. Most strange of all is the mage's disturbing and bewitching wife, Lilith, who watches everything impassively with her luminous green eyes. Aubrey learns lessons of love and hate, right and wrong, on top of the art of shape-changing during his time as Glynrenden's apprentice. A deftly woven tale, reminiscent of the fairy tales I loved as a child, full of nature and morals. Of course, the reader figures out the truth about Lilith long before Aubrey, but this did nothing to detract from my enjoyment of the story. I am in love with Sharon Shinn's writing, but this book is not for you if you like a story with more action and whiz-bang.

Published by Thriftbooks.com User , 19 years ago
The two things I love best about Sharon Shinn's books are her character development and her unique plots. And this book is no exception.A young magician-in-training, Aubrey, journeys to a remote manor to apprentice himself to the greatest shape changer ever, on the recommendation of his last teacher. Aubrey finds his new home strange and things about the other inhabitants downright alarming. His new teacher seems to taunt him with knowledge instead of imparting it and is often gone on mysterious missions that he refuses to speak of. The servants seem to hate their master, but refuse to leave him. Those who live in the nearby village are terrified of, not only the shape changer, but his entire household as well. And as for Lilith, the shape changers wife, she seems to feel nothing at all.Aubrey finds himself strangely bound to each one, but especially Lilith. As Aubrey begins to learn more than his teacher ever meant for him to, he also begins unraveling a startling mystery that will change the destinies of himself and all that surround him.The plot was intriguing, romantic, and often surprising. Fantasy fans won't want to miss it.

This book is why I didn't like "Harry Potter"

Published by Thriftbooks.com User , 20 years ago
I didn't know it, but this is the kind of book that spoiled "Harry Potter" for me. (Which I recognize to many will sound like damning with faint praise and to others like blasphemy.) I read the first "Harry Potter" book this time last year and didn't like it much. It didn't seem to me to be about magic, but about a school and its students. It seemed rather pedestrian to me. I already love fantasy and science fiction, so "Harry Potter" hardly seemed like a revelation. This is book by Shinn about a magician's training and coming of age and how that tranforms him is so much better, more mature and yet simpler than "Harry Potter." I don't recommend this book to the fourth-grade lovers of HP, but the adults and 15 year olds will love it.Yes, *this* is what good fantasy can be.

The Shape-Changer's Wife -- Short but Fantastic

Published by Thriftbooks.com User , 21 years ago
This is truthfully how fantasy writing was meant to be. "The Shape-Changer's Wife" is a beatiful, short tale with all the elements of the genre and wonderfully written. Most fantasy books try too hard to have complicated plots, and yet don't focus on the characters and the story itself. In this book, the tale is simple, but enriched and perfectly written. I would definetly recommend this to all Fantasy readers. Sharon Shinn is a master at storytelling.

A captivating blend of fantasy, romance, and magic.

Published by Thriftbooks.com User , 25 years ago
This book by new author Sharon Shinn, is among the best of recent works of fantasy. She adroitly blends the elements of the classic fairy tale with an in-depth look at the nature of magic in her world and a moving, personal romance into a seamless whole far greater than the sum of its parts. The book centers on a young, talented wizard setting out to learn the most difficult and closely guarded magic - that of shape-changing. However, before he can become anything else, he must learn what it truly means to be a deer, a horse, a tree...or, most importantly, a human.
Copyright © 2020 Thriftbooks.com Terms of Use | Privacy Policy | Do Not Sell My Personal Information | Accessibility Statement
ThriftBooks® and the ThriftBooks® logo are registered trademarks of Thrift Books Global, LLC