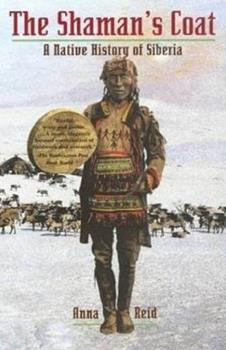 The Shaman's Coat: A Native History of Siberia

The fascinating history of an unknown people A vivid mixture of history and reporting, The Shaman's Coat tells the story of some of the world's least-known peoples-the indigenous tribes of Siberia. Russia's equivalent to the Native Americans or Australian Aborigines, they divide into two dozen different and ancient nationalities-among them Buryat, Tuvans, Sakha, and Chukchi. Though they number more than one million and have begun to demand land rights...

Published by Thriftbooks.com User , 15 years ago
This study of the mysterious Siberian people was very engrossing - I enjoyed it very much. Recently, I read a great book that I thought would be of interest to those that also enjoyed this book - Tent Life in Siberia: An Incredible Account of Siberian Adventure, Travel, and Survival by George Kennan.

Published by Thriftbooks.com User , 18 years ago
This is a most fascinating book. When one hears the word Siberia, what usually comes to mind is "gulags" and "ice." But, author, Anna Reid, in The Shaman's coat reveals the real face of Siberia, its surviving native peoples. Anna Reid's description of this vast and thinnly populated region had me unable to put this book down. It is a great place to start if you want to go beyond the usual stereotypes about Siberia. But, this book is more than a historical and anthropoligical study, it is a study on how the worst of a dominating culture can aggresively and even passively destroy a competing or primative culture. Russian domination of Siberia was hard enough on Siberia's native peoples, but once Russiafication was driven by marxist ideology it was deadly. It basically left stone age and ancient peoples empty. Peace for these people, here in the 21st century, is usually found in a full vodka bottle. My only negative about the book is that the author, Anna Reid, feels the answer lies in Russia and the native population of Siberia adopting PC western attitudes. My only question here would be, why trade one form of social dysfunction for another? Maybe, this is just a British trait, a kind of motherly post-colonialism. The author hails from the UK. But, I suspect materialistic feminism would not serve the Buryat, Tuvans, Chukchis or any of the other Siberian natives any better than marxism. And to be fair, the author's suggestion is only found in the afterword of the book. Overall this is a great read.

Published by Thriftbooks.com User , 18 years ago
Only three native populations in the world today have been virtually whipped out, driven from their homelands and yet they remain, remnants and testaments to a different world. These are the American Indian, the Aborigine of Australia and the Natives of Siberia. This essential work tells the stories of the tribes and the peoples of Siberia `from their view'. The Siberian natives, from the Buryat to the Khant are a diverse people from many walks of life and of different races. Many of these people were disastrously affected by the coming of Communism and the upheavals of Stalin and industrialization. Yet they remain in pockets in some of the harshest landscape in the world. This is a wonderful book that sheds light on these fascinating people.Seth J. Frantzman

Published by Thriftbooks.com User , 19 years ago
This is a well written, sometimes humorous book on the indigenous peoples of Siberia, groups of people that I, like many, have never heard of. Peoples possessing their own rich cultures, who have suffered under the Tsars, under Stalin, and even today face hardships. It's difficult to comprehend just how vast Siberia is, the Russian-ruled territory east of the Ural Mountains and bounded by the Arctic and Pacific Oceans, five million square miles of northern Asia, larger than the US. However, out of this vast territory the native groups are a minority, a mere 1.6 million out of a Siberian population of 32 million. Though the origins of the Russians push into Siberia are disputed, dating back to the days of the 16th century and Tsar Ivan IV (the Formidable to the Russians, the Terrible to English speakers), the author chronicles a sometimes depressing history of abuse of native peoples, pushed aside by Russian settlers, maltreated by Russian and later Soviet administrators, their traditional ways of life and religion attacked, decimated by disease, forced to produce vast amounts of sable and other furs or other onerous tasks. Petersburg and later Moscow were less interested in native peoples than the use of Siberia as a land of exile, a place where criminals, prisoners of war, and political exiles were sent to, the land that "was the death of hope, the unhappiest of endings." Even those who sought to protect the native peoples often had little success thanks to corrupt and often very isolated officials; Reid writes in some cases the round trip time for communications during the days of the Tsars was two years! The best part of the book though is the many fascinating native groups of Siberia. We meet the Khant of the river Ob region in western Siberia. Called sometimes by the Russians the Ostyaks (a term they generally consider derogatory), they are related to the Finns and Estonians, and lived lives of fishing and hunting, their most complicated artifacts their massive bows and highly specialized arrows. Their language, sadly now largely gone, was wonderfully precise, with no general word for instance for fish or bird, but only words for specific species, and amazingly their vocabulary was over 80 percent verbs, with different words for sitting on the ground, sitting on a log, and sitting on a stump. Their religion has virtually vanished too, one that involved feasts honoring bears that they hunted. Along the Russian-Mongolian borderland she introduces us to the Buryat, a Mongol people who roamed as nomads a Sweden-sized mix of forest and steppe. Possessing written language, firearms, tribute-paying vassals, and vast livestock herds, they were among the most powerful nationalities encountered by the Russians in Siberia, subdued only after a series of wars that lasted some 30 years. Their rich Buddhist legacy was nearly annihilated under the Soviets much like the Chinese have done in Tibet, with temples destroyed or converted to other uses, lamas hun

Published by Thriftbooks.com User , 19 years ago
Who knew? 1.6 million native Siberians: Buryats, Nivkh, Khanty, Evenk, Uilats and many more. Not an in-depth academic study but a look at daily life and brief histories of people and places virtually never covered anywhere else.
Trustpilot
Copyright © 2022 Thriftbooks.com Terms of Use | Privacy Policy | Do Not Sell or Share My Personal Information | Accessibility Statement
ThriftBooks® and the ThriftBooks® logo are registered trademarks of Thrift Books Global, LLC