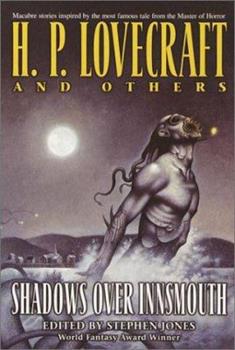 Published by Thriftbooks.com User , 18 years ago
I'd like to point out that all of these authors (excepting only HPL himself) are British. Others have pointed this out, but it bears repeating. Most of these stories are set in England, which produces a different interpretation on Innsmouth than American writers. I suspect that the British simply have a different way of viewing things. Most of the writing was excellent, and the rest was at least innovative. "Deepnet" suggests that as far as Deep Ones taking over humanity, there is more than one way to skin a cat. "Dagon's Bell" by Lumley is one of the most Lovecraftian stories in this collection and "Beyond the Reef", while a little hard to follow, drew in many elements from Lovecraft's Massachusetts. Some of the writing I found very difficult to appreciate; "Down to the Boots" and "Only the End of the World Again". Maybe the British write in a less concrete way than American authors, but I really had no idea what these stories were about - they seemed more like fragments. Maybe I'm too uncultured to appreciate writing like this, but I felt it brought down the quality of the collection. There were also a number of stories that I wondered why they used the Innsmouth device. As far as I could tell, they would have been good stories on their own and then had the Innsmouth/Deep Ones jammed in. It makes a poor ad hoc plot device - why not just develop your own ideas? "Homecoming" was the absolute worst offender - it's about going home to Romania after the end of communism only to find nothing has changed. The only connection to Innsmouth was calling the secret police "Deep Ones". I suppose metaphorically it is how the non-collaborators of Innsmouth might feel about their icthyic oppressors, but it's a real stretch to say it belongs. Well, the stories themselves have been well reviewed below, so I'll leave them alone. It's a decent collection of interesting writing, sometimes loosely connected to the Lovecraftian canon. My only concern is that many stories seem to have had the plot device forcibly inserted.

good addition to your pulp library

Published by Thriftbooks.com User , 19 years ago
this collection contains a good deal of good stories like daoine domhaine and the church in high street. stories by campbell, lumley, copper, sutton..... not the most inventive stories i have read, but good storiess, well written. this is in fact one of the finest pulp collections

There's Always Been Something Fishy About Innsmouth...

Published by Thriftbooks.com User , 20 years ago
...and it's all right here.Lovecraft's own inspirational story, "The Shadow Over Innsmouth" - curiously, one of his own least favorite, but one of his best - leads off this terrific collection of clever spin-off tales by contemporary authors on the same theme: namely, that there are isolated seaside places around the world where the inhabitants not only pray to, but interact with, ancient subaqueous demon-gods from other worlds.Many of the tales are more or less sequels to Lovecraft's seminal story, set in and around Innsmouth itself, the fictional Massachusetts town the author first "sailed" the concept in. Each of these reads very well as its own stand-alone piece, successful entirely independent of Lovecraft's story, but all the more entertaining for being one way or another connected to it. Other tales, such as Ramsey Campbell's "The Church In High Street," are set in other locations, like the decayed, dockside areas of Great Britain, where similar interbreeding with noxious hellspawned water-gods also is occurring. One especially good story, Kim Newman's "The Big Fish," actually reads like a credible direct sequel to Lovecraft's original, and is all the more perfect for essentially performing like a 1930s noir-horror film. Even Neil Gaiman gets in on the act, with a skin-crawling little bit of nastiness about an Innsmouth descendant coming to terms with his gruesome genetic heritage.One thing you can count on, in this collection: something in it will definitely appeal to your Lovecraftian tastes - so long as that taste is for fish.

The master would be pleased...

Published by Thriftbooks.com User , 21 years ago
Well this was certainly a pleasant surprise. I saw a new HP Lovecraft-inspired collection on the shelf, and I was thrilled. I think my friend is still seeing a chiropractor for the injuries I inflicted on her with my bear-hug. First, for fans of Lovecraft, this is a great book filled with chilling reimaginings of the Innsmouth legends. Second, fans of authors like Neil Gaiman will TREASURE the stories contained in this book. Last, it's written in BRITISH PROSE, which, myself being an uncultured American slob, is a refreshing new way to tell the old stories. I recommend buying it. Heck, I recommend memorizing the thing. May the memory of Lovecraft live on for ages to come!
Trustpilot
Copyright © 2022 Thriftbooks.com Terms of Use | Privacy Policy | Do Not Sell My Personal Information | Cookie Preferences | Accessibility Statement
ThriftBooks® and the ThriftBooks® logo are registered trademarks of Thrift Books Global, LLC