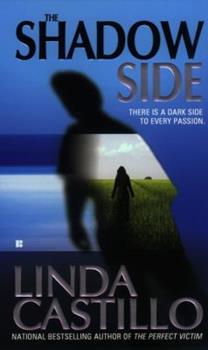 The Shadow Side (Berkley Sensation)

Dr. Elizabeth Barnes has devoted her heart and soul to medical research...at the expense of love. Until a detective contacts her about a recent wave of homicides, which may have resulted from her new anti-depressant. Now, this intense, driven cop may be the only one who can stop the killings-and save her from the dark side.

What an awesome novel!

Published by Thriftbooks.com User , 18 years ago
THE SHADOW SIDE is an awesome novel of romantic suspence with an intriguing plot and characters that I found I could really relate to. I simply couldn't turn the pages fast enough, but also didn't want it end. Fans of romantic suspence will love it as much as I did!Linda Castillo is an author who will go very far, and I will be eagerly awaiting the release of her next novel!

Published by Thriftbooks.com User , 18 years ago
With childhood tragedy as a motivator, Dr. Elizabeth "Eli" Barnes devotes her life to medical research. Indeed, her one and only love is work. Consequently, Eli eagerly anticipates receiving the Distinguished Woman of Science Award for the development of Valazine, a drug that treats depression. But before the ceremony, Detective Adam Boedecker approaches her, convinced that Valazine has contributed to a sudden rash of murder/suicides. While she initially rejects the possibility, Eli's conscience quickly leads her own research and shocking conclusions.Adam's career as a street cop nearly ended three years ago when a kid put a Saturday night special to his head and pulled the trigger. Brain damage left him struggling to relearn ordinary skills while his wife slept with his best friend. Admittedly a better cop than a brother, Adam concludes his brother's usage of Valazine led to murder/suicide, leading him to unofficially pursue investigation regardless of the cost. Moreover, intrigued by Eli's strengths and vulnerabilities, Adam does not anticipate the damage the investigation could do to his heart.All the more shocking for its potential to appear in contemporary headlines, THE SHADOW SIDE presents an evocative, chilling tale of suspense. Once again author Linda Castillo displays remarkable talent for creating a tale both plausible yet extraordinary. Both Eli and Adam are damaged, finding recovery as they move through a maze of antagonism and suspicion to learning to trust their hearts and each other. As Eli's priorities shift and as Adam overcomes his disability, their characters develop with strength and power, even as they masterfully reflect the edgy, underlying tension of the novel. A novel fraught with chilling intensity and betrayal, THE SHADOW SIDE comes very highly recommended.

Published by Thriftbooks.com User , 18 years ago
Linda Castillo caught my attention with "The Perfect Victim". Her new novel, "The Shadow Side" has truly won my respect. Dr. Elizabeth Barnes has devoted her life and her extraordinary talents to developing a cure for the depression that led her mother to commit suicide at age thirty five. Detctive Adam Boedecker, a burnt out cop on disability after being shot in the head three years earlier, needs to prove that his brother's murder suicide was the result of taking Valzine the new drug developed by Dr, Elizabeth Barnes released by Dr. Barnes employers. Adam's research uncovers a string of similar cases all tied to Valzine. At first angered by Adams accusations, Elizabeth soon suspects that one or more of her colleagues cannot be trusted. After the murder of Elizabeth's friend and mentor she finds herself on the run with only Adam to help her. Together they must pursue a killer and help eachother to heal. This is a well written and suspenseful tale that is perfect for a day at the beach or pool.

Published by Thriftbooks.com User , 18 years ago
This combination of romance and mystery couldn't be better. Keeps you turning pages until the very end.

Published by Thriftbooks.com User , 18 years ago
Dr. Elizabeth Barnes has spent her whole life trying to find a way to help people battle depression. A tragedy in her own past has driven her to do all she can to help the people that are plagued by depression. After spending ten years researching and developing a new drug, Valazine is finally out on the market, and studies show her it's thriving. Which is why she is so shocked when burnt out cop, Adam Bodecker forces himself into her office and tells her that her drug is responsible for turning people taking Valazine into violent monsters.Det. Adam Bodecker thought he lost it all on the night that he was shot. He had no idea what lost was until the day he learned that his brother murdered his pregnant wife and then turned the gun on himself. Not believing for a second that Michael could do that, Adam digs deeper, and what he finds, infuriates and well as shocks him. All he wants are answers, and the one person who could give them to him is the woman who is partly responsible for the drug being on the market at all.The Shadow Side shows Castillo's extrodinary writing skills once again as these two people race to uncover the truth before any more lives are taken. You have danger, suspense, romance and sex, along with a plot that will keep you spellbound in all his horrifying glory.
Copyright © 2020 Thriftbooks.com Terms of Use | Privacy Policy | Do Not Sell My Personal Information | Accessibility Statement
ThriftBooks® and the ThriftBooks® logo are registered trademarks of Thrift Books Global, LLC