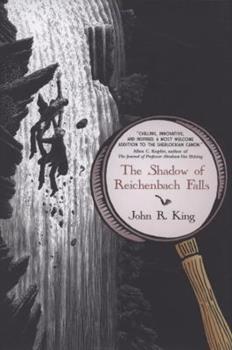 The Shadow of Reichenbach Falls

Probably the most infamous story in the Sherlock Holmes canon is "The Final Problem" as it relates the facts of the death/murder of the master detective at Reichenbach Falls. On May 4, 1891, the detective met his archenemy Professor Moriarty on a ledge above the falls; the two became locked in a titanic hand-to-hand struggle before both tumbled over the precipice, presumably to their deaths, as witnessed afar by Dr.Watson. The outcry against the death...

As Good a Holmes Story as Can be Got

Published by Thriftbooks.com User , 14 years ago
This should be subtitled "The Reichenbach Incident." Involving Sherlock Holmes, Prof Moriarity, and Dr. Watson, it tells the story of the space between the moment Sherlock Holmes fell over the Falls and he appeared again in London, and introduces another character who will later become a well-known fictitious detective in his own right, Thomas Carnacki. A devil-may-care girl-chasing student at this time, with little money but a taste for adventure, Thomas Carnacki--on holiday in Switzerland--invites himself on a picnic with a young lady he's just met. They stop at Reichenbach Falls, just in time to see a man throw another into the water. They fish out the victim and--the game's afoot! The drowning man is Sherlock Holmes, of course, but a Holmes stricken with amnesia, and Carnacki and his lady friend must help the Great Detective regain his memory while keeping him and themselves alive and out of the Professor's deadly clutches. This story can easily fit into the space left on your bookshelf right after "His Last Bow". It's fast-paced and entertaining. The story behind Moriarity's rise as a teacher and fall as a master criminal is a well-constructed background, though I would have preferred to have him do it under his own power rather than with supernatural assistance. Still...even with that, it's a tale that will be satisfying for Holmes lovers and readers of "chase" stories in general.

The explanation of Holmes' disappearance at last!

Published by Thriftbooks.com User , 14 years ago
King does an amazing job here of perfectly capturing the essence of a Sherlock Holmes story while not getting bogged down with out-of-date language or scenery. The story begins at the "final" confrontation between Holmes and Moriarty at Reichenbach Falls (thus the name of the book) and carries us on from there. One thing this author does so well is finally giving us a reason to sympathize with Moriarty! We are given what could technically be called Moriarty's origin story here, and it's a tragic tale that actually makes us feel sorry for the man and understand his motivations behind becoming the criminal mastermind he would one day be. I've never read another author who did that, and the unique slant gives King high marks. The book moves along at a great pace, and even during the bits of back story enough happens to keep you interested. Moriarty's confrontation with Jack the Ripper is great storytelling, and it's a wonderful explanation for both the identity of the Ripper and what eventually happened to him. The book comes to a powerful conclusion and I honestly couldn't find anything to complain about. I hope King revisits Holmes in the future with another great novel.

Great read and connects the dots in the saga of Holmes..

Published by Thriftbooks.com User , 14 years ago
Prof Moriarty has been an enigma so far for intelligent mystery readers worldwide and this book makes a very clever attempt at unravelling this mystery and I must add, quite successfully !! The book has a very clever premise set in the matters of heart, passion, history and ties several historical and fictional events of the era and that of the Holmes saga. The use and recent scientific theories ( such as Chaos ) help the story, which probably was difficult to imagine about 100 years ago. The book is a bit cumbersome from a narration perspective and is a nice device as it helps the story as its more about the villain that about the hero. This is in tune with the recent developments at the comic world and makes good sense. Without giving too much away, it was great to see that the resolution offered was in tune with the enigma and mystery around the Moriarty character. I have read some books by Laurie R King, who writes about the older Holmes ( strange, both writers last names are R King :-). I find this book a better story and fitting the saga as it was created by Doyle. Some paragraphs and chapters reminded me of Pendergast, the FBI agent creation by Preston / Child. Strongly recommend this book !

The Shadow of Greatness

Published by Thriftbooks.com User , 14 years ago
Exactly how many times will Professor Moriarity and Sherlock Holmes rattle literaty sabres? John R King writes an interesting book that centres around the question...what if Holmes survived the fall from the Falls and lost his memory? Mr King postulates that the daughter of Professor Moriarity found him (along with Thomas Carnacki) and in their escape from Moriarity, we learn about the 'real' Professor and his twisted life. A professor of mathematics at Jesus College, he descended into a personal hell after the murder of his wife by Jack the Ripper, and his subsequent possession. His daughter, Anna, vows to free him from the demon and through the course of the book, does so at a high cost to herself. Holmesians will love the book. Much of the characterization is in tune with Doyle, and even Moriarity seems to be a shadow of his literary self here. Mr King must watch numbers, as the middle of the book reads like an episode quantizing human interaction by intergration and differentiation. This is the only weakness of the book. Completists note, another entry has been made in the world of Sherlock Holmes. Tim Lasiuta

A Great Introduction to the Holmes Canon

Published by Thriftbooks.com User , 14 years ago
I found this book to be a wonderful, page-turning read. It is well written and served as an excellent introduction to the Holmes canon. I am looking forward to more work from Mr. King.
Trustpilot
Copyright © 2022 Thriftbooks.com Terms of Use | Privacy Policy | Do Not Sell or Share My Personal Information | Accessibility Statement
ThriftBooks® and the ThriftBooks® logo are registered trademarks of Thrift Books Global, LLC