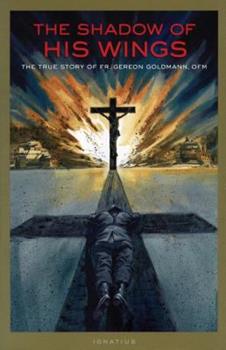 Shadow of His Wings: The True Story of Fr. Gereon Goldmann

We had to do it. We had to reprint this book. Rarely has a book had such an impact on so many of us here at Ignatius Press. It is one of the most powerful and moving books we have come across. If you can only buy one book this season, this must be the one. Here is the astonishing true story of the harrowing experiences of a young German seminarian drafted into Hitler's dreaded SS at the onset of World War II. Without betraying his Christian ideals,...

Published by Thriftbooks.com User , 22 years ago
If you're looking for a book this Christmas season that will appeal to anyone, high school age and up, this is it. It's a quick read, but profoundly compelling and more than just a war story or story of a priest's life. It reveals the depths of the human spirit and the heights it can achieve when linked with an authentic love of God. You don't have to be Catholic or even Christian to appreciate the universal themes of this book. Highly recommended!

God works in the life of this inspiring man.

Published by Thriftbooks.com User , 22 years ago
A friend gave me this book to read and told me that I would enjoy the story of Fr. Goldmann. She warned me that it had moments of ugliness and horrible accountings; since it was written about the life of a Nazi. Fr. Goldmann started out in his village as a simple altar boy with a strong faith in God. This faith stayed with him during his trials as a Franciscan novitiate, caught up in the life of an SS officer for Hitler, through filthy and depraved situations and led him to his ultimate destiny. The Holy Father gave him special permission to serve as a priest to the many people surviving the horrors of war in camps and prisons. With the prayers of devout nuns and friends and his constant, guiding faith and fortitude in God, Fr. Goldmann helped many souls to their final rest by administering the Sacraments and the offering of the Mass. The simple everyday gifts of food and shelter and our local parish church mean so much more after I discovered the situations that faced people caught up in the struggle to stay alive and keep their Faith during the wartime. In the epilogue, I marvelled at Fr. Goldmann's missionary work that he accomplished in Japan starting with his primary struggle in learning the Japanese language. His childhood dream was to go to Japan. He managed to build up the Church there and inspire many Japanese to become devout Christians and serve the Lord. His further work with the poorest in Tokyo, "the ragpickers", gave us insight into the conditions of the people. How he helped students and mothers with families was a constant inspiration. This story makes you want to go out and work for the Faith and offer prayer wherever it is needed.

Keeping The Faith in Faithless Situations

Published by Thriftbooks.com User , 22 years ago
Fr. Gereon Goldmann takes you through life in Europe during WWII (and especially when serving in the German military). Goldmann proves to be faithful to God and his country, in spite of the hardships and trials. How easy it would be to despair when your own country accuses you of being a traitor, like Goldmann's country did. But remember, Germany was under the Nazi regime and naturally, if you stood for justice against prejudice, you were considered a traitor. Fr. Goldmann is ordained a priest while serving as a soldier and changes the lives of many while in combat. This edition takes you where the original story left off (it was origianlly published in 1964), and Fr. Goldmann moves on to minister in Japan.

Faith Cutting through the Fog of War

Published by Thriftbooks.com User , 22 years ago
This is the memoir of a Franciscan priest originally published in 1964, and with an appendix and epilogue that expands and updates the original through his years as a missionary in Tokyo. Gereon Goldmann was drafted in 1939 into the Wehrmacht while a seminarian. What follows is an incredible string of events, close scrapes with death at the hands of the Nazis and Allies, and what to a person of faith will be seen as small miracles.Goldmann survived the war only to fall into the even deeper abyss of the worst prisoner of war camps in North Africa. Throughout all (the word all cannot convey the challenges he faced), his faith and sense of purpose gave his otherwise miserable existence meaning. The best stories of modern war from the foot-soldier's ground-level perspective (All Quiet on the Western Front and The Forgotten Soldier, for example), convey the horror, misery, chaos, fog, and in the end, meaninglessness of the soldiers' lives and deaths. But Gereon Goldmann shows how faith injects purpose and meaning even onto battlefields and into prison camps. Where all earthly forces worked relentlessly to dehumanize and destroy, Goldmann worked resolutely among his fellow soldiers and jailers to bring them dignity and hope.The early parts of his story, with his childlike faith, will strike postmodern ears as hopelessly naiive. However, eventually the reader will be rewarded by seeing how Gereon's faith is nothing less than a rod of the steel penetrating his entire life and being. It will be difficult to read another dogfoot's story of war without inevitably contrasting it with Goldmann's. Although no GI is able to view his situation as a Field Marshall does his strategic maps, it is Goldmann, not only protected by the shadow of His wings, but carried very, very high on those same wings, that rises to a vastly higher level yet.

Divine Providence at its best!

Published by Thriftbooks.com User , 22 years ago
In light of all the controversy surrounding whether Pope Pius XII did enough for the Jews, and on the recent Papal apology for the past sins of the Church comes a book that demonstrates the actions of some in the face of Nazism.This true story follows the experiences of a young German seminarian, Gereon Goldmann, drafted into Hitler's SS in the beginning of World War II. The story tells how Goldmann, in the face of evil, was able to continue his training for the priesthood and minister to others.This is the best book of 2000!
Trustpilot
Copyright © 2022 Thriftbooks.com Terms of Use | Privacy Policy | Do Not Sell or Share My Personal Information | Accessibility Statement
ThriftBooks® and the ThriftBooks® logo are registered trademarks of Thrift Books Global, LLC