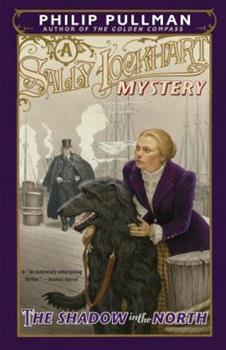 The Shadow in the North: A Sally Lockhart Mystery

(Book #2 in the Sally Lockhart Series)

WHEN ONE OF Sally's clients loses a large sum of money in the unexpected collapse of a British shipping firm, Sally sets out to investigate. But as she delves deeper into the identity of a wealthy and elusive industrialist, she uncovers a plot so diabolical, it could subvert the entire civilized world.

Published by Thriftbooks.com User , 19 years ago
"The Shadow in the North" takes a darker tone than the previous Sally Lockhart book, "The Ruby in the Smoke." Sallies enemies take on a more realistic tone than the operatic Ah Lee, and there is some serious doubt about who, if anyone will prevail in this strange adventure.Like all books in this series, Philip Pullman pulls together historical accuracy, winding plot lines, likeable characters and outright adventure. Sally Lockhart is not a perfect hero. She has faults like any person and often is blinded by her ambition to prove herself. She goes through many changes in this book and matures into a young woman. No longer a teenager, Sally is in her twenties in "The Shadow in the North." Fred Garland and Jim are there to help her as usual.I don't want to give away too much about the book. It is a mystery after all! But I will say that, like many Philip Pullman books, "The Shadow in the North" is bitter-sweet and captivating. Sometimes reality intrudes too much into the fantasy, leaving a strange sensation for the reader. A very good novel.

A polemic as cold and slippery as ice

Published by Thriftbooks.com User , 19 years ago
Pullman has a rare and valuable talent: his chosen field is the young adult novel, and he writes for young adults. Frankly, without condescension, and with a lively intelligence and subtle humor that shows he respects his audience as much as they (indubitably do) respect him. This novel shows a young woman in full command of her faculties being put into the teeth of an excruciating moral predicament, and if the road she eventually finds out of it is a simple one, that is because Pullman is not above granting a final bit of wish-fulfillment after he's run us through the wringer.I'll leave the plot summaries to other reviewers; it's enough to say that it's a lively and political mystery / thriller and its coincidences, while implausible, do not betray their own internal logic. Pullman is first and foremost an observer of character, and what makes this book something that makes me, a 29-year-old guy who tends to read much more austere stuff, take notice, is the sheer aliveness of the characters. There's Sally, of course, a resolutely feminist young woman whose resolve and determination are surely of her time, even if some of her anxieties and dilemmas seem more resonant with the present than Victorian England; Frederick, her friend and peer who she loves, and with whom she argues helplessly and often; Jim, their young, streetwise friend, who is capable, brave, and eminently self-aware; and a large cast of supporting characters, many of them women, who are sharply limned and full of their own stories. The fact that Sally is living out what would have been, at best,a Victorian woman's fantasy is dealt with elsewhere; the fact that huge swathes of the dialogue is anachronistic is irrelevant.What sets this apart from other young adult novels, even as it evokes them, is the very real sense of moral hazard and the awful consequences of the modern age that it portrays. The world into which Sally, Frederick, and everyone else is being swept is one where the old hunger for power is being given new, terrible means of finding its voice. The clarity with which Pullman evokes this sense of foreboding is remarkable, as is his restraint. At its heart this novel is a warning of terrible things that have already come to pass. It is insistent without being didactic, it shows rather than tells. In the end it convinces.While the Lockhart trilogy is not as stunning as the His Dark Materials books, it's not trying to be. It's about one woman, her friends, and the world whose birth they must survive. If they are occasionally more than human, that might just be because something more than human is necessary to survive in this new world.

best in the trilogy

Published by Thriftbooks.com User , 20 years ago
This is by far the best book in the Sally Lockhart trilogy. The first and third are very good but don't have the emotional intensity of this. The plot is well written and horrifying while being a lot easier to follow than The Tiger in the Well. The ending is heart-wrenching but without it the third wouldn't work and it is a tribute to Pullman's writing skills that this is only the second book that has ever made me cry. Although the plot is full of tension and makes you want to read on and on I feel that the main focus of this book is Sally's relationship with Fred and her battle to interpret her feelings for him. The character's are what makes a book and this is no exception. The goodies are vivd, funny and lovable and the baddies, although ultimately evil manage to throw in a few shocking twists. I think it is essential to read the books in order. Reading the third before this would remove the horror of the ending and most of the plot since it is summarised in the Tiger in the Well. All in all one of the best books I've read. Thrilling and heart breaking.

The Best of the Trilogy

Published by Thriftbooks.com User , 20 years ago
The Shadow in the North, the third book in the Sally Lockhart Trilogy, is the best in the series. The book is wonderfully written with and excellent, but complicated, plot.Six years later Sally Lockhart is a 21 year old financial consultant and Fredrick Garland and 20-something photographer and private detective become involved in a mystery or murder and fraud. Sally refuses to accept that her relationship with Fred is becoming something more then friendship.... You'll be smiling through your tears!!! Its a must read that you can't put down. You'll probably end up reading it a dozen times.The ending is sad , a happier ending may have been better, but its one more obsticle Sally must overcome in her life. The Shadow in the North is absouloutly the best in the series, not saying the others were bad they too were excellent. I recomend reading the books in order , their more enjoyable that way!! But no matter how you read them make sure you read The Shadow in the North!!

Published by Thriftbooks.com User , 21 years ago
Back when I was in middle school, I was quite a bookworm. One summer I spent every night with a book, in the huge armchair at my house. This was one of them. I cried at the end, I *cried.* That's the very first thing that I have to say about this book, and I'm not ashamed at all. All of Pullman's books have such real characters, so that in time you feel so very attached to them by every cell in your body that at times reading can be difficult. All of the books in this series are so full of emotion in some parts that its unbearable. I really became very attached to the characters, not just emotionally. They're just all so lovable, or hatable. Quite a splendid cast, if I do say so myself. But, the romantic aspect of this novel can be a bit difficult to take.However, that's not all I have to say about this. I must mention that I read this overnight, which was a big deal to me back then, since books this size seemed *huge.* The plot is excellent, and it held me captive for quite some time. Every part of it made me want more, to read more. This is one of those books that you can't put down the first time through, and then want to reread many times because it is just oozing with coolness and goodness and plain ol' niftiness.So, read this book. Read the other books in this trilogy too. Read His Dark Materials. Read anything by this author, it's all wonderful. I may seem to be speaking behind a veil of nostalgia, but I am not. (However, I would be if I was proclaiming the greatness of something like Power Rangers - eeeew.) Go on, read this book. But, be warned, you will have tears in your eyes by the end. I still do, whenever I find myself rereading it. Any book by this author is well worth your time and money - trust me.
Copyright © 2020 Thriftbooks.com Terms of Use | Privacy Policy | Do Not Sell My Personal Information | Accessibility Statement
ThriftBooks® and the ThriftBooks® logo are registered trademarks of Thrift Books Global, LLC