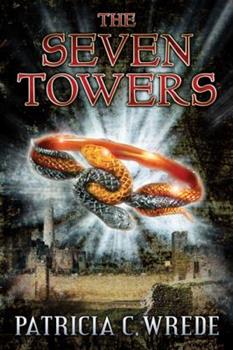 They are seven players in a game of deadly magic? Eltiron, Prince of Sevarin; Crystalorn, Princess of Barinash; Ranlyn, the desert rider; Jermain, the outlaw; Vandaris, the soldier; Carachel, the Wizard-King; and Amberglas, the sorceress. Each of them has a secret, and each fights his or her part in the thrilling battle that has put seven kingdoms on the very edge of destruction. Filled with wit, swordplay, humor, and intrigue, this early novel is...

Published by Thriftbooks.com User , 15 years ago
It's easy to see how some of the ideas in _The Seven Towers_ relate to Wrede's later books. Amberglas, for instance, seems to foreshadow Telemain in the Enchanted Forest Chronicles. In some ways she's a more interesting character--but she can also be more annoying to read. The whole idea of the towers also comes up again, though a little differently, with the tower in _Caught in Crystal_. Any major Wrede fans will find it a worthwhile read. It took me seven years (ironic, huh) to track down a copy in a used bookstore, but now we have copies readily available here, which is nice. If you're not a Wrede fan already, I think I'd recommend looking at one of her later novels first (the Enchanted Forest Chronicles for something humorous; or _The Raven Ring_ or _Caught in Crystal_ for a general, all-around good fantasy quest type of novel; or _Snow White and Rose Red_ if you like fairy tales; or _Sorcery and Cecelia_ for a Regency story, mixed with magic). _The Seven Towers_ is by no means a bad book, but it's a bit scattered, and it certainly doesn't meet the same standards as her later books (not that I'm complaining; it's a good sign when you like a writer's works better and better as each new one comes out). On the other hand, the style is distinctly different from her other books--it reminds me a little of an older style of sci-fi and fantasy that we don't see much of anymore; I'm not sure how to explain it, but the tone of the book seems like it's halfway in between the Lyra books and Asimov's original Foundation trilogy. Maybe I'm crazy and my copy just has the right, slightly yellowed older-book texture; I don't know. But I think it definitely has some interesting characteristics of the now-long-gone pulp novel (which was already well on the way out by the time _The Seven Towers_ was written). There are a lot of very stereotypical fantasy characters, but the twinge of humor works there. And maybe more importantly, even if you've already heard plenty of stories with shy princes, and older princesses who'd rather be mercenaries, _The Seven Towers_ is still a really fun read. It's not Wrede's best, in a literary sense, and it's not a terribly cohesive novel in a lot of ways (I'm not talking about the multiple points of view, either). But it's an interesting change of pace. And it's still a really intreguing story. Definitely worth picking up.

Published by Thriftbooks.com User , 19 years ago
I really like everything by Wrede, and this is no exception. It's been a while since I last read it, but I remember the story being interesting and the characters being witty. It was definitely worth the used bookstore hunt.

Published by Thriftbooks.com User , 22 years ago
I had gotten a collection of stories from a friend, and the beginning of The Seven Towers was one of them. It made me want to read the rest of the book, so I went to the library and got it. The story was really good, funny, exciting, and everything else you want. I liked this book a lot because you knew each character's personality really well. A good, well-written book.

Published by Thriftbooks.com User , 23 years ago
It's been a long time since ive read this book, but it has lots of elememts working together; betrayal, good vs evil, politics, love, magic, comic relif, mystery. Every element works perfectly to make a very charming whole

Published by Thriftbooks.com User , 24 years ago
I was fortunate to find this book at a used book store. I had read Wrede's Enchanted Forest cronicles,before and loved them, so I was really glad to find this.This book has a neat story. I don't really want to tell what it's about, because that would be giving away a lot of the book! It has good characters. I especially liked Amberglas, an absentminded sorceress. This is a quote from the book: "Good morning, my lady," he said with more warmth then he had intended. "Yes, it is, isn't it? Though of course it's quite possible that it isn't nearly as good a morning elsewhere. Shula Mari, for example. I belive it quite frequently rains in Shula Mari at this time of year, which could be quite depressing, though perhaps it isn't if one lives there all the time. But then, I haven't been there yet, so I'm not entirely certain" (The one who spoke last was Amberglas) She speaks like this (almost)the entire time! I just really liked this book.
Copyright © 2020 Thriftbooks.com Terms of Use | Privacy Policy | Do Not Sell My Personal Information | Accessibility Statement
ThriftBooks® and the ThriftBooks® logo are registered trademarks of Thrift Books Global, LLC