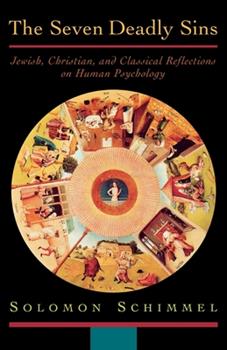 All of us are engaged in a personal, ongoing battle with sin and vice. The seven deadly sins--lust, greed, envy, anger, pride, gluttony, and sloth--are our main antagonists in this struggle. They are primary causes of unhappiness and immorality, and because of their pervasive nature, have been of perennial interest to religious thinkers, philosophers, dramatists, and poets. Although our anger doesn't make most of us murderers, our lust doesn't make...

Published by Thriftbooks.com User , 17 years ago
This is a beautiful book written by a man extremely well educated in religion, psychology, ethics, and philosophy. The wonder of the book is how the author manages to both contrast and integrate the different schools of thought. The main premise is that secularism has not provided adequate replacements for the ethical (and other) religious teachings, and that it should do so. His suggestions is that modern psychology should incorporate the wisdom of the saints and philosophers, which is has not so far done. His discussions go to the heart of the matter, even dealing with issues of free will versus determinism. The discussion is often very concrete with stories of specific persons and their problems. A fascinating integration of ancient and modern thought. Schimmel was propetically named by his parents, as was the biblical Solomon, he is very wise man. This is a great book to read and re-read for anyone seeking to heal themselves and those around them.

Sloth as the worst??

Published by Thriftbooks.com User , 19 years ago
Sin is a dirty word in most modern psychotherapy. How refreshing it is to find a book that tries to revitalize the notion of sin while tempering it with modern thinking. But make no mistake: this is no religious rant, no fundamentalist tract. Far from it; here is a wise, cautious attempt to marry modern psychotherapy with traditional wisdom. The author's rather conservative (or at least traditional) Judaism shows on every page, but he is still a thoughtful and tolerant writer. The book is laid out in a very plain fashion: an introduction ("The Persistence of Sin"), chapters for each of the seven sins, then a conclusion ("Sin and Responsibility"). There are abundant references to Chaucer, to Shakespeare, to lesser-known Jewish and Islamic thinkers of the Middle Ages and the Renaissance. The sin # 1 chapter, Pride, gives us the Satan of Milton's PARADISE LOST as the prime example. Sin # 2, Envy, has Shakespeare's Iago; the third chapter, on Anger, has King Lear's opening scene featured (see pp. 106-107), and discusses the American mania for lawsuits as a means of vengeance. The Lust chapter is the most delicate one in the book; Schimmel here has to temper modern notions of healthy sexual self-expression against the dangers of lechery and overindulgence. This chapter fades nicely into Sin # 5, Gluttony, which we moderns might call Overindulgence - of food, sex, or drink (or even drugs, but Schimmel oddly doesn't go there). The wisdom of the ages has no consensus on which sin is the most deadly, but Schimmel's placing of Greed as the sequential penultimate Sin seems far from arbitrary. Think of the obsession in the modern West with what the Canadian thinker and politician Eric Kierans recently called the "accumulation" mania, a sickness summed up by the 1990s bumper-sticker, "he who has the most toys when he dies, wins." Onto Schimmel's seventh and final sin: Sloth. Here is the book's most troubling and troublesome chapter. Sloth here is only minimally what we usually associate with the word: laziness, laying-about, being a couch-potato. Far more important is Schimmel's attachment of Sloth to what we might call "existential despair." Sloth is not only physical, but intellectual. If we lay back, hide, retreat, take cover because life is just too overwhelming, then we are guilty of Sloth. It seems to me that Schimmel is here (and only here) a bit cruel to those of us who may have biochemical imbalances and severe mood swings. But this chapter seems to urge us to carry on even if we are clinically depressed and intellectually despairing. It is odd how Schimmel, elsewhere in this book so adept at linking the ancient wisdom to the modern, can go on about Job (194-95) but never mention someone like Samuel Beckett. Here's an activity for a serious dinner-party or an intelligent classroom: compare the sequence of the seven sins in this book's chapters with the progression of the seven in the late 1990s movie SEVEN (with Brad Pitt as Bad Cop, Morgan Freeman

this book was a wonderful documentry of the sins

Published by Thriftbooks.com User , 23 years ago
I have read many such books and I find this one to be the most informitive and well-written

Published by Thriftbooks.com User , 23 years ago
Anyone who wonders what he or she is about today will find great directives in this book. It is so full of old cultures and tradition, the genuine feel of which we seem to lack to-day in our hasteful, almost superficial world. From viewpoints of ancient times comes a timeless voice, rich in human experience and wisdom. It is the great accomplishment that ancient knowledge has been made accessible in a modern, somewhat therapeutic way. The book is clear, honest and compassionate, and renders a good insight in what sin is precisely, and our human ability to make good and beautify our souls and existence. To everyone withdrawing once in a while to be with themselves: read this book!

Fantastic book for those who study their character.

Published by Thriftbooks.com User , 24 years ago
Schimmel defines the sin and then describes the results of this defect of character. Examining each sin from a classic Greek, Jewish and Christian perspective Schimmel then recommends secular pschological remedies. This, I feel, is the books only failing. I must say I loved the book and everyone I have loaned my copy to has loved it also. I treasure my copy and have gained insight into my character by studying it's every word.
Trustpilot
Copyright © 2022 Thriftbooks.com Terms of Use | Privacy Policy | Do Not Sell My Personal Information | Accessibility Statement
ThriftBooks® and the ThriftBooks® logo are registered trademarks of Thrift Books Global, LLC