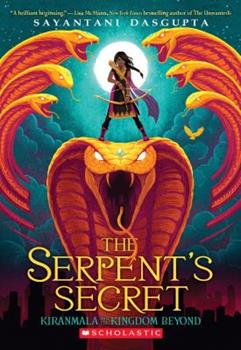 The Serpent's Secret (Kiranmala and the Kingdom Beyond #1), 1

(Book #1 in the Kiranmala and the Kingdom Beyond Series)

From New York Times bestselling author comes a world packed with action and adventure, perfect for fans of Rick Riordan and Soman Chainani. MEET KIRANMALA: INTERDIMENSIONAL DEMON SLAYER (Only she doesn't know it yet.) On the morning of her 12th birthday, Kiranmala is just a regular sixth grader living in Parsippany, New Jersey...until her parents mysteriously vanish and a drooling rakkhosh demon slams through her kitchen, determined to eat her alive...

Why are these book characters so cool?

Published by Thriftbooks.com User , 3 years ago
I’m totally jealous of book characters, because they’re all stuff like The Lost Jewels of Anneira and The Dragonets of Destiny or The Boy Who Lived or the CRC or the Interdimensional Demon Slayer. Wouldn’t it be really cool if you were something like that. This is a new book I love, because the MC is so, well, cool!!!! In the book Kira complains about not having a cell phone! Kid, you’re a dimension-jumping, arrow-shooting, monster-fighting Daughter of the Serpent King! Isn’t that better than having a phone? Kira is now on my list of people I would like to live for a couple days as, alongside Katniss, Hermione, and Rey, and the Kingdom Beyond Seven Oceans is on my list of places to live, along with Pyrrhia, the Lost Cities, and Middle Earth. Kiranmala, in the footsteps of her book character ancestors, is awesome. Sayantani takes her rightful place alongside Tui and JK in my “awesome authors” list!

A keep you on the edge of your seat thrill ride!

Published by Thriftbooks.com User , 3 years ago
I read this to make sure it was age appropriate for my kid. Not only is it that but I really enjoyed it! I couldn't put it down, and the fact that it incorporates things from Indian culture made it all the more intriguing for me. I'd recommend this for any child or adult who wants to read a good adventure!
Copyright © 2020 Thriftbooks.com Terms of Use | Privacy Policy | Do Not Sell My Personal Information | Accessibility Statement
ThriftBooks® and the ThriftBooks® logo are registered trademarks of Thrift Books Global, LLC