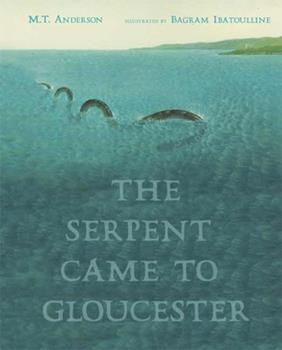 The Serpent Came to Gloucester

Rhyming text tells of a sea serpent that plays off the coast of Massachusetts the summer of 1817, and is hunted upon its return the next year. Includes a page of facts upon which the story is based.

What a great book

Published by Thriftbooks.com User , 13 years ago
This beautiful picture book should be read aloud, even if you are reading it aloud to yourself, because the sea-shanty rhythm of the text adds a musical depth to this gorgeous and haunting narrative. I should have been too jaded to enjoy this--in the course of writing my own picture book on the Loch Ness monster, I read a bunch of sadly soggy sea serpent stories. But M. T. Anderson's contribution to the genre rises way above that waterline. The tale is plot-driven enough for younger children and monster afficionadoes, but also had emotional overtones that captivated even my older twin daughters.

Published by Thriftbooks.com User , 14 years ago
This book was a great read and the illustrations were spectacular! Will be giving this as gifts for sure!

Published by Thriftbooks.com User , 16 years ago
It has been documented that in August of 1817 the residents of Gloucester, a small Massachusetts fishing village, saw a rather frightening sight - a gigantic sea serpent swimming off the coast. Evidently, these reports caused a bit of a stir as a number of people came to study this sea creature and others came in hopes of capturing it. All to no avail. As told by M. T. Anderson in captivating rhyme this is the story of that serpent and of how the people in the village gradually almost became accustomed to their startling new neighbor. He begins with: "It was on a day when the sun was bright, When the limpets were thick on the rocks, When the seagulls would squawk And would talk and would fight For the fish laid to dry on the docks." Thus, Anderson is a bit of a Scherazade as he escorts readers through first the initial sighting by a young boy, next to the townspeople watching the serpent play in the water, and then to the men coming with weapons, singing "killing songs." According to historical records, a Captain Rich came the closest by claiming to have harpooedn the creature but the serpent shook off the harpoon and swam away. Bagram Iratoulline's illustrations are lovely, luminous, evoking the scenes of 19th century New England and the mysterious beauty of the ocean. - Gail Cooke

Published by Thriftbooks.com User , 16 years ago
Just what you hope for in a picture book! A beautifully illustrated tale told in mesmerizing rhythms that just beg to be read out loud. In the classic tradition of well-made books, the entire book--from concept to cover--is thoughtfully conceived and executed. All the pieces work together to create a memorable experience for readers young and old. The surprising fact that the story is based on historical events in Cape Ann, Massachusetts-revealed in an author's note at the back of the book-just adds to the wonder of it all. It's a keeper!
Copyright © 2020 Thriftbooks.com Terms of Use | Privacy Policy | Do Not Sell My Personal Information | Accessibility Statement
ThriftBooks® and the ThriftBooks® logo are registered trademarks of Thrift Books Global, LLC