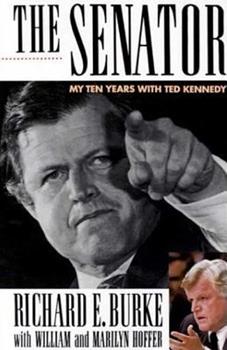 The Senator: My Years with Ted Kennedy

In 1971 Richard Burke, a freshman at Georgetown University, volunteered his services to the offices of his political idol, Senator Edward M. Kennedy of Massachusetts. Through ability, hard work, and dedication, Burke rose in the next four years to become one of the Senator's closest staff members. In 1977 he was made Kennedy's personal assistant; after his appointment in 1978 as administrative assistant - the youngest in the Senate - he came to know...

insight into the Big Lie of the Kennedy family

Published by Thriftbooks.com User , 12 years ago
First of all, I had some bias prior to reading this book. I knew of many of the antics of the Kennedy family through acquaintances and visiting the compound once but with the accolades that were surrounding his death, I decided to read something from someone close to him. I did not really know what the book was about but that it was written by a close personal assistant/friend. The thing that impresses me most about the book is the endless frustration the author imparts to the reader about what a waste Ted's life was. The press continue to ignore the Emperor has no clothes with the President claiming he was the greatest senator in living memory or something along those lines. Cocaine dealing, woman demeaning, principals of a snake are the least of what I read. Well, if Ted Kennedy was the greatest senator, then my total disgust with our congress has reached a new high. Everyone should read this book who is interested in the 7th grade antics of power hungry better than thou politicians, actors, CEO's etc. It is a great example of how the world really works and the power of marketing and branding. Also, it is about us and what we continue to elect into office. That is the most scary thing. Look what we the people put into office year after year and then glorified him. Dead or alive, truth is truth.

Published by Thriftbooks.com User , 16 years ago
I found this book at a "free read" and am glad I picked it up. I feel that Mr. Burke gives what appears to be honest insight into his observation working first from afar then eventually beyond close at hand to Senator Kennedy. I believe the positives of this book far outweigh any negatives one might find in the disclosure of personal family happenings. This book actually has caused me to see Senator Kennedy in a more human, approachable image that as formerly, simply focusing on his family heritage regarding money, fame, etc. My heart goes out to the whole Kennedy family who has suffered tragedy after tragedy in spite of all their wealth which only brings home the truth that money cannot buy happiness. I strongly urge one to read this book. I am glad I did.

A highly personal look into the life of Ted Kennedy.

Published by Thriftbooks.com User , 20 years ago
Richard Burke provides highly personal look into the life of Ted Kennedy during the years he spent as a staffer for him. He describes what it was like to work for Ted Kennedy in their professional and personal relationship. He also talks about the personal side of Kennedy's 1980 primary race against then President Jimmy Carter.Kennedy was a hero to Burke and although he sees Kennedy for what he really is and at times, at his worse, he still doesn't try discredit the man or put him down for what he's done. Burke sometimes tells about how he tried to save Kennedy from himself in his overindulging in drugs, sex, and drinking.Sometimes you might wonder if its all true though, but Burke admits that during his years with Kennedy, he was no angel either making it more plausible. Its not really a dirty little kiss and tell book. Its more of a personal look at Ted Kennedy by someone that was close to him and knew him well.In the end, as Burke says, Kennedy for all his flaws cannot do a lot of harm as the respected Senator that he is now, so long as he doesn't become President, but his chance has already passed.

Richard Burke's Idol,who turned out to be a Shattered One

Published by Thriftbooks.com User , 21 years ago
I read this book in 1992.I couldn't put it down.Richard Burke gives us an inside look into Ted Kennedy's life for ten years while he was working for the Senator.Ted was Richards Idol,but soon discovered what a shattered Idol he was.After reading this book,you realize Ted Kennedy is a nice guy,but not very bright,and Richard praise's Rose Kennedy as a wonderfull,caring person.If your interested in the Kennedy's like I am,you will enjoy reading "The Senator."

The Ted We Never Knew

Published by Thriftbooks.com User , 23 years ago
This is an amazing book. Burke became the enabler, the one who worked hard to keep Ted from destroying himself in public. Bill Clinton and Ted are cut from the same cloth. They don't believe in the consequences of their actions. They are above the law and everything else.
Trustpilot
Copyright © 2022 Thriftbooks.com Terms of Use | Privacy Policy | Do Not Sell or Share My Personal Information | Accessibility Statement
ThriftBooks® and the ThriftBooks® logo are registered trademarks of Thrift Books Global, LLC