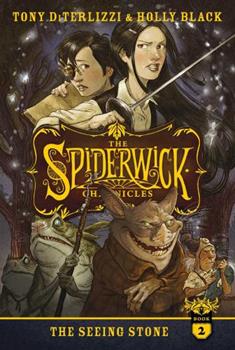 (Book #2 in the The Spiderwick Chronicles Series)

by Tony DiTerlizzi and Holly Black

Mallory and Jake must rescue Simon from the goblins who snatched him in this repackage of the second book in the #1 New York Times bestselling Spiderwick Chronicles. Thanks to the mysterious field guide left behind by their long-lost great-great-uncle Arthur Spiderwick, life for the Grace kids--Jared, Simon, and Mallory--is beyond weird. When Simon goes missing, Jared is convinced creatures from the faerie world have something to do with it. Mallory...

Published by Thriftbooks.com User , 13 years ago
This book rocks. They finally put goblins and creepy things in The Spiderwick Chronicles. This book is about Mallory, Jared, and Simon finding something called the seeing stone. The seeing stone lets you see trolls and goblins that you can't see without it. Simon gets taken away by goblins and after Jared and Mallory find him they meet a hobgoblin named Hogsqeal. The best thing about this book is because it is like an adventure. My favorite part is when Simon finds a kitten in a cage near a goblin camp. My favorite character of this book is Thimbletack because he talks funny. The thing I don't like about this book is that it's not something you would read at bed time. I think everyone should read this book.

Published by Thriftbooks.com User , 13 years ago
By Ben The authors of this book are Tony Di Terlizzi and Holly Black. There are three siblings and their names are Jared, Simon and Mallory. Simon gets kidnapped by goblins while he is playing in the yard. Then Jared and Mallory have to save Simon. They find all different types of creatures along the way. The main character of the story is Jared. It takes place in the present in a small town. The topic of the story is fairies, trolls and goblins. I think the authors are trying to say you never know what will exist or what will happen. My favorite part is when they find Simon. The book is surprising. People who are 9-10 and like fairies and trolls would like this book.

Just realistic enough to make you . . .

Published by Thriftbooks.com User , 14 years ago
. . . wonder what is lurking in those woods or inside our walls. Very enjoyable storytelling with enough realism to make you question, did I see that or was it my imagination? The short format makes it easy to quickly get involved, but not too involved which would be easy to do. The books make you question whether or not you believe in fairies. After reading the first two books in the Chronicles, I am not sure what I believe. The illustrations are wonderfully detailed and add much to the story. This book will be an excellent addition to any storybook collection.

Published by Thriftbooks.com User , 16 years ago
Mallory, Jared, and Simon are back in the second book from Series, "The Spiderwick Chronicles". After making peace with the brownie who caused the mischief in the first book, the children encounter more mysterious creatures. After being warned that the Field Guide should not be touched, Simon's new cat becomes missing and one of the children gets kidnapped. They find out that they aren't the only ones who know about the Field Guide. The search then begins for the lost sibling. There are many new encounters with different creatures, including a little Hobgoblin named Hogsqueal. But, can he be trusted? I don't want to give too much away about this second book. I found it to be a great follow-up to a fantastic beginning. These books don't take long to read, but they are full of great imagination, cleverness, and humor. If you love the world of faeries, and folklore, these books are for you. They flow at a fast pace, and you are waiting for what the next page has to offer you. I definitely recommend this book , but only after you read the first one!

In Which Simon is Kidnapped, and eyes are spat in

Published by Thriftbooks.com User , 17 years ago
With both of his siblings believing him now, Jared has gone from feeling as if he doesn't belong to feeling somewhat like the leader - even if it's not directly stated in the book. He views Arthur's book as his, as well as the knowledge contained therein, something further expanded upon in book 3, Lucinda's Secret.The title of the book refers to a remarkably inventive device called the seeing stone, a stone which allows mortals to see faerie creatures. This comes in handy, because Simon (Jared's twin) is kidnapped by goblins very early on, and it is up to Simon and Mallory to save him. It would be difficult to save someone from invisible creatures.This leads them through some interesting adventures. They go to the goblin camp, where they see many cages hanging from trees that contain animals, some of which are trying to escape; others who seem resigned to their fate. Simon is also in one of these crates, and rescuing him involves a nasty bit of spitting, a scene that will certainly cause considerable cringing. To save Simon, they must strike a deal with a troll - but can the troll be trusted?The reason the goblins kidnapped Simon is, of course, because their real goal is to get their hands on Arthur Spiderwick's Field Guide to the Fantastical World Around You. Why do they want it? Can goblins even read? While they may be strong for their size, they certainly don't seem wise. This is a puzzle that the children can't work out.
Copyright © 2020 Thriftbooks.com Terms of Use | Privacy Policy | Do Not Sell My Personal Information | Accessibility Statement
ThriftBooks® and the ThriftBooks® logo are registered trademarks of Thrift Books Global, LLC