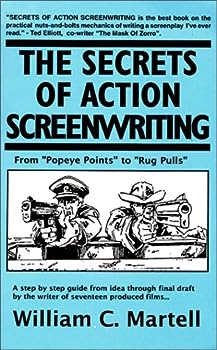 The Secrets Of Action Screenwriting

240 pages packed with techniques and tips for screenwriters, focusing on the action, thriller and suspense genres. No theories! Only actual techniques! The ultimate HOW TO screenwriting book! Creating... This description may be from another edition of this product.

Get Out Your Highlighter and Index Cards, Baby!

Published by Thriftbooks.com User , 17 years ago
I'm a big fan of Tony Robbins. Yeah, the infomercial guy. One thing that Tony teaches is that if you want to learn how to do something, find an expert and model them. Learn what they do, how they do it, and learn those exact same habits, actions and ways of thinking. With over seventeen sold screenplays, Bill Martell is an excellent choice for you to learn action screenwriting from. He's sold over seventeen scripts! How many screenplays have Syd Field, Robert McKee, Linda Seger, Michael Hauge and John Truby sold recently? Not a hell of a lot, because they are too busy raking money in, hand over fist, by doing nothing but teaching arcane, over intellectualized and just plain weird ways to write screenplays. Martell breaks it down to the basics, baby. Every page, I'm having an 'Ah Ha!' moment. I break out the highlighter, I write the nugget of information down, for use in my own scripts. Do yourself a favor and get this book. It's small, it's succinct and it's learning from a guy who's a working, selling screenwriter. Deal with the facts of the business and learn how to write selling screenplays; get Bill Martell's book today. - William Mize, Shamus Award nominee, creator of the Denton Ward and Monty Crocetti mystery series.

Great advice for outlining your next story

Published by Thriftbooks.com User , 18 years ago
This book isn't a broad examination of story structure like you find in Robert McKee's "Story," or an abstract analysis of archetypes and forms like in "The Writer's Journey" by Christopher Vogler (both excellent books in their own right). Instead, Bill Martell bypasses the forest and takes you straight to the trees to explain the nuts and bolts of storytelling through screenplays. The book's title sells itself a bit short; this isn't just a book about writing screenplays for what are traditionally considered action genres. While the information is certainly presented in the context of action films, much of it would be just as applicable to, say, romantic comedies or period dramas. Topics covered include sidekicks, love interests, building suspense, plot twists and reversals, all of which have broader application than just "action" films. Martell knows his subject well and has studied hundreds of movies to figure out what works on film and why. He frequently uses examples from specific movies-often his own-to help drive home his points. And he doesn't pull any punches in pointing out where some films go wrong. While explaining the common storytelling devices used in film, Martell draws on his real-world experience as a screenwriter to help you appreciate the perspective of producers, directors and actors who might read your script. These are obviously important considerations if you ever hope to see your baby on the big screen. Somewhat surprising is the number of typographical errors in this book, which easily could have been avoided by a careful review of the manuscript. But it's a minor distraction from an otherwise excellent book.

Published by Thriftbooks.com User , 20 years ago
...because he's a working writer who has over a dozen produced credits. They may not be A-list movies, but they're over at your local video store.Unlike the McKee and Field books, Martell gives you real tools to structure your story, talks about what makes for great character moments ("Hamlet speeches"), how inanimate objects can reveal something about your protagonist (if you go to UCLA Film School they call it "correlative objectives" -- something that physically embodies what your character is struggling with throughout the story) and how to keep things moving in your script. This is a no-BS guide to screenwriting -- even if you're not into action movies, you'll find it highly valuable. Get it.

Published by Thriftbooks.com User , 20 years ago
Most of the screenplay books you find are written by people with a background related (sometimes not very closly) to the movie trade. THIS book is written by a man with 17 produced screenplays to his credit. How many other authors can say that? This book doesn't waste your time telling you the format you've already read about 15 how to books on. It cuts straight to the nuts and bolts of actually writing the screenplay itself. This "nuts and bolts" book is a must read for any serious screenwriter regardless of the genre of your script. The author also has a website where you can receive free tips daily...
Trustpilot
Copyright © 2022 Thriftbooks.com Terms of Use | Privacy Policy | Do Not Sell or Share My Personal Information | Accessibility Statement
ThriftBooks® and the ThriftBooks® logo are registered trademarks of Thrift Books Global, LLC